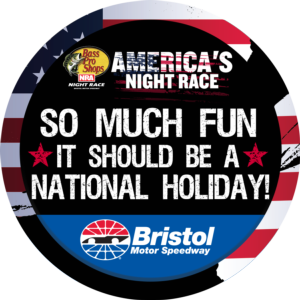 After a strong initial push last year, the momentum is rising. People are talking. Hey, this just might happen.

Given all of the pomp and circumstance surrounding the Bass Pro Shops NRA Night Race - America's Night Race - as most people fondly refer to it, there's reason to expect that this magical weekend in August is gaining the support it needs to become an official National Holiday.

Fans from all 50 states and more than 20 countries converge onto 151 Speedway Boulevard August 15-17 to be entertained by the world's greatest stock car drivers. When the lights go on each night for intense side-by-side racing, fans will cling to the edge of their seats as all of the intensity and drama unfolds.

America's Night Race has proven to be a bucket list destination for many and offers one of the biggest, grandest celebrations of family, fun, patriotism, music and speed that one can imagine, so the natural progression of events leads to only one destination.

Let's make it a National Holiday! Consider all of the boxes that are checked.

*Community Support: America's Night Race gets tremendous support from the surrounding Tri-Cities: Kingsport, Johnson City and Bristol, and with their help makes the event a weeklong celebration of fun and excitement. To kick off race week and put everyone into a racing mood, each one of those cities hosts a Race Week Party. On Monday, Kingsport will host the opener from 6-10 p.m. and it will be tied in with the Golf Channel's Long Drive competition at Cattails at Meadowview. Johnson City gets things going on Tuesday at the Founders Park Amphitheater from 6-8:30 p.m. and Food City will host its traditional Family Race Night on Wednesday along State Street in downtown Bristol from 1-9 p.m. All of these events are free to the public will feature NASCAR driver appearances and autograph sessions, music, food and fun. BMS will run shuttle from the track property to each one of these Race Week Parties.

*Anniversaries: This year BMS will celebrate one of the most thrilling race finishes in NASCAR history. Back in 1999, Dale Earnhardt bumped Terry Labonte out of the way on the final lap as he steamrolled to the checkered flag. The iconic moment sent fans into a tailspin. Even some of Earnhardt's diehard legion of supporters were shouting boos at the Intimidator. Labonte, who came out on the winning end of a similar final-lap takeover attempt by Earnhardt back in 1995, was not pleased. In Victory Lane, Earnhardt famously said, "I didn't mean to wreck him, I just meant to rattle his cage…"  That moment has meant so much to Bristol Motor Speedway and the extended NASCAR nation that this weekend it will be celebrated and remembered by track officials.

*Fun with Friends: There's so much to do during the weekend around the grounds of Bristol Motor Speedway, including stops in the Fan Midway and Fan Zone. There's music, games, food, souvenir haulers, driver appearances, autograph sessions and more.  Guest Welcome Villages are positioned strategically to offer guest assistance. You'll also want to kick back and enjoy some NASCAR-style tailgating with your friends prior to each night's race. There'll be plenty of appearances by drivers, legends and other celebrities throughout the weekend.

*Family Bonding: Want to bring the kids for an action-packed weekend of racing? Don't worry. BMS provides one of the largest Kids' Zone on the NASCAR circuit with inflatables, games and activities that will entertain your tykes and at the same time give parents peace of mind. The race is the perfect opportunity for parents to share their love of NASCAR with their children. Talk about the science of racing, pick favorite drivers, share some laughs and also some ooohs and aaahs when the powerful race cars speed around the track. The memories you will make at BMS will last a lifetime and likely be passed on through many generations. And for families who want to come, BMS is offering free kids tickets on Thursday and Friday and only $10 kids tickets on Saturday.. In addition, BMS also has special pricing available for teens, ages 13-19, for each day of racing.

*United We Race: You won't find a place that's more patriotic, that honors, celebrates and cherishes American virtues and values better than Bristol Motor Speedway. From timeless performances of the National Anthem, to powerful military flyovers, the red white and blue can be seen everywhere around BMS property.

*Social Scene: While you are visiting BMS, you are strongly encouraged to check out the "It's Bristol, Baby!" sign located at the track's North Entrance and take a photo or two beside the iconic landmark. Then you'll need to go ahead and tour all the other BMS signature photo locations positioned throughout the campus to compile a complete set of images.

*Now That's a TV: Another great thing about attending a race at Bristol is the unbelievable entertainment provided by Colossus TV, the world's largest center-hung stadium video display. Completed in April 2016, Colossus TV has the highest viewing quality of any permanent outdoor stadium display in the world, featuring 2880 x 1350 lines of resolution. Compare that to the average home HD TV screen at 1920 x 1080. It currently hosts nearly 54 million LEDs and 18 million pixels, which are grouped tighter than the large-scale outdoor displays in Times Square. Watching Colossus TV is like sitting in your living room with the state of the art digital experience but still having the race action going on right in front of you.

*Awesome Music: Racing and music have been tied together over the years like peanut butter and jelly. Bristol Motor Speedway has built a reputation for bringing in some of the most entertaining acts to perform at various times throughout the weekend. This year's pre-race concert is headlined by rising country star Travis Denning. There's also music acts playing all around the property during the weekend. You'll want to check the schedule of performances so you won't miss a single beat.

*Pre-Race Pit Stop: Speaking of Travis Denning, he will headline the pre-race concert that will be held as the feature attraction in this exclusive access attraction inside the Monster Energy NASCAR Cup Series garage. This add-on experience takes your race day to another level. See the haulers, cars, and teams up close and be fully immersed in the Pre-Race activities, including access to the Monster Energy NASCAR Cup Series Driver introductions. A cash bar with food is also available in this area. You can also stick around inside the garage and watch the race until lap 100. This add-on experience is available with any ticket package for Saturday's Bass Pro Shops NRA Night Race.

*Great Camping: While hotel rooms are nice, sometimes it's great fun to get outside and become one with nature. Bristol Motor Speedway provides you with the perfect opportunity to access your inner outdoors enthusiast during the Bass Pro Shops NRA Night Race. BMS owns and operates five campgrounds around the facility and each provides a variety of amenities. Whether you drive a state of the art RV or prefer to anchor a tent in the ground, BMS has you covered. In addition, this year M&Ms has added its "GlampGround" experience to the camping scene at BMS and it's already sold out. Once you are here camping, you will have easy access to the grounds and all of the excitement going on inside the stadium. Your ticket to fun is merely a quick walk away.

*Did we mention, great racing? There's so much fun to be had and we've barely mentioned the real star of the show. Yes, it's Bristol, baby! Some of the most memorable moments in NASCAR have taken place during the Bass Pro Shops NRA Night race on the .533-mile oval that's nicknamed The World's Fastest Half-Mile. NASCAR's best drivers will beat and bang on each other and only the strongest will survive 500 laps of mayhem and chaos inside the high-banked, all concrete bullring. There are four races scheduled over three nights, including action in the K&N Pro Series East, Gander Outdoors Truck Series, Xfinity Series and the Monster Energy Cup Series. In the Cup race, you'll get to see all of your favorite drivers doing what they do best, including Bristol dominator Kyle Busch, his arch-rival Kyle Larson, defending race winner Kurt Busch, Ryan Blaney, 2016 Night Race winner Kevin Harvick, Austin Dillon, 2017 series champ Martin Truex Jr., Chase Elliott, Erik Jones and Bubba Wallace.

So if you want to help the cause, and get behind the push to make America's Night Race the next National Holiday, go ahead and call your congressmen and women, senators, mayors and governors. Heck, even call the president himself. Tell them it's way past the time for committee hearings and town hall gatherings on this motion. There's plenty of evidence supporting this request. Tell them that you too would gladly give your vote to add these three magical August days and nights in Northeast Tennessee to the rotation of U.S. holidays.