Celebrating the 20th anniversary of an epic NASCAR finish 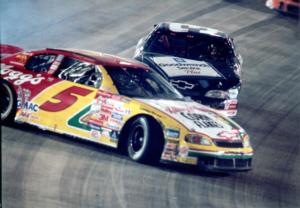 In order to appreciate the full magnitude of the legendary 1999 Night Race finish, where Dale Earnhardt bumped his way past on-track rival and off-track friend Terry Labonte en route to his ninth Bristol Motor Speedway victory, you need to jump into a time machine and head back to the 1995 Night Race.

It was here where all of this madness started. On that night, Labonte was leading on the final lap and Earnhardt applied the bumper to his car while it was heading out of turn four. Somehow Labonte managed to keep his Chevy out in front and took the checkered flag in dramatic fashion. His car crossed the finish line sideways with tire smoke billowing in the distance as he ultimately careened into the outside retaining wall. In Victory Lane, he and his team stood proudly by his mangled machine which was spewing steam and liquids.

Presented with a similar late race scenario in '99, The Intimidator wasn't going to be denied as he approached Labonte's Chevy after the white flag was waived.

This time, Earnhardt popped the bumper on Labonte's No. 5 Kellogg's Chevy in turn two, sending the Texan into the outside wall and then careening down into race traffic before coming to a stop on the inside wall. Earnhardt, meanwhile, powered his black No. 3 Chevy on around the track and took the checkered flag.

In Victory Lane Earnhardt famously said, "I didn't mean to wreck him, I just meant to rattle his cage."

You could barely hear Earnhardt talking with ESPN pit reporter Jerry Punch after the race. That's because thousands of BMS fans were letting Earnhardt know they weren't pleased with how the race ended.

"It was the only time in my career covering Earnhardt where I remember Earnhardt getting booed mercilessly," said longtime ESPN reporter Marty Smith. "He got out of his car in Victory Lane and all those crazy sparks went off and it sounded like he was the most hated man in the sport. The amazing thing is Bristol is known as Earnhardt country. What a fantastic night and man, ol' Terry was pissed."

Labonte, who earned the nickname the Iceman due to his mild-mannered persona, said that he was pretty angry following the incident and that Earnhardt had crossed the line that time. He later said he had planned to retaliate immediately by putting his car in reverse so he could ram it into the side of Earnhardt's machine when he rolled back around the track on the cooldown lap. However, when Labonte had Earnhardt's winning machine in his sights and mashed the gas in frustration to slam into it, his car tore the gear out and wouldn't move.

"Everybody said I was so calm after the race," Labonte said. "But I wouldn't have been if that hadn't have happened."

Two decades later the race still draws water cooler conversations and the video of the final laps is a YouTube sensation.

"That race is certainly one of the greatest finishes in all of NASCAR history, if not the single greatest finish," said Jerry Caldwell, executive vice president and general manager, Bristol Motor Speedway. "During the Bass Pro Shops NRA Night race this year we are going to have some fun looking back at that race as we remember how important it was to the sport and the industry. It set the standard for exciting finishes and it serves as a great reminder to fans each and every time that they walk into The Last Great Colosseum that a similar thrilling finish is only 500 laps away."

As part of that celebration, on Tuesday, July 30, at the NASCAR Hall of Fame in Charlotte, N.C., several participants from that race will share their memories and tell some great stories about that night during the "1999 Night Race Rewind" event, hosted by Bristol Motor Speedway. The event starts at 2 p.m. and is open to the public. A ticket to the NASCAR Hall of Fame is required for entry.

In four weeks, NASCAR fans will once again be able to cheer on their favorite drivers and watch some amazing finishes as the greatest stock car drivers in the world battle on the all-concrete high banks. Perhaps another finish just as thrilling as the Earnhardt-Labonte battles of the '90s will take place when Bristol dominator Kyle Busch, his brother and defending Night Race winner Kurt Busch, Martin Truex Jr., Kevin Harvick, defending series champion Joey Logano, Brad Keselowski, Chase Elliott, Jimmie Johnson and Ryan Blaney will all be looking to take home the Gladiator sword from The Last Great Colosseum during the Bass Pro Shops NRA Night Race.