ALLGAIER LOVES BRISTOL; FEELS LIKE TRACK OWES HIM ONE AS HE PREPARES FOR UPCOMING NASCAR XFINITY SERIES CHEDDAR'S 300 PRESENTED BY ALSCO 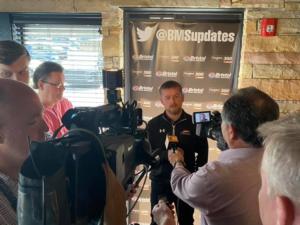 BRISTOL, Tenn. (March 11, 2020) - JR Motorsports driver Justin Allgaier calls Riverton, Illinois home. But on the NASCAR Xfinity Series circuit, he likes to think of the super-challenging half-mile bullring known as Bristol Motor Speedway as his home away from home.

"Bristol is my favorite race track," Allgaier told a group of reporters Monday afternoon at a Cheddar's Scratch Kitchen restaurant in Knoxville.

"Obviously with my first win in the Xfinity Series and my best finish in the Cup Series, it's near and dear to my heart," the driver of the No. 7 Brandt Chevrolet for the Dale Earnhardt Jr.-owned racing team continued. "It's a place where it's fun to be."

Allgaier, who has competed in the Xfinity Series for 11 years including the last five with JR Motorsports, has earned 11 victories, 85 top five finishes and 177 top 10s during that span. At Bristol, he's raced to one win (2010) and posted eight top-five finishes. During a two-year stint in Cup Series racing, Allgaier posted his career-best finish on that circuit at Bristol, an eighth place effort in the 2015 Night Race.

He says the track's unique layout, with high-banked corners and an all-concrete surface that pushes top qualifying speeds into the 128 mph range, creates the perfect recipe for creating intense racing and usually, drama.

"It's difficult," Allgaier said. "It's just a physically demanding and challenging race track. It's one of those places you have to keep up with adjustments all day."

He says during his two races at Bristol last year he felt like he had the car to beat on both occasions. In April he led 138 laps before crashing with a failed part. During August's Food City 300, he led 131 laps before a tire issue dropped him to an eighth place finish. He hopes this year he can finish with a checkered flag in his hand.

"We had the dominant car in both races last year," Allgaier said. "We unfortunately broke a hub in the first race. In the fall race, we were leading and had a tire go flat with eight laps to go. It was so disappointing, but it embodies what Bristol is all about."

After a decent West Coast Swing, Allgaier is eager to get back to some East Coast racing, especially the Cheddar's 300 presented by Alsco, April 4 at BMS. The race starts at 1 p.m. ET and will be televised on FS1. The top four finishers from the Texas race the weekend before will have a shot to go for a $100,000 bonus during the Xfinity Dash 4 Cash at Bristol.

In four starts so far this season, Allgaier has posted a 30th place finish at the season-opener at Daytona, then finished eighth at Las Vegas, 12th at Fontana and 13th at Phoenix.

"We've had a strong car, but just not the results to show for it," Allgaier said. "Now that the West Coast swing is over, we're trying to get re-centered and focus on what we need to do to be fast week in and week out, and what we need to execute the finishes."

The race weekend will finish with the marquee Food City 500 NASCAR Cup Series race on Sunday, April 5 when BMS dominator Kyle Busch, who is going for his third Food City 500 win in a row and sixth overall, will be challenged by a host of tough competitors including Chase Elliott, Ryan Blaney, Kyle Larson, 2019 Night Race winner Denny Hamlin, Clint Bowyer, Kurt Busch and Jimmie Johnson among others.

Bristol Motor Speedway officials are making it easier than ever for families to enjoy the weekend. Kids' tickets (12 and under) and adult tickets are free for Fun Friday, where race teams in all three featured racing series will hit the high banks to make critical practice laps. On Saturday, fans will be treated to Bush's Beans Qualifying for both Cup and Xfinity Series and an amazing racing double-header featuring the Cheddar's 300 presented by Alsco NASCAR Xfinity Series race and the ARCA Menards Series East Zombie Auto 150 race. Saturday's tickets for adults start at $30 and are free for kids 12 and under. On Sunday, adult tickets start at $48 for the Food City 500 NASCAR Cup Series race through the special Jimmie Johnson ticket package that includes a Q&A with the seven-time champ and kids' tickets start at $10. For all races, each child must have a physical ticket in hand to enter the gates. The Bristol Motor Speedway ticket office is the only authorized location that can produce the free kids' tickets. Teens aged 13-19 are also eligible for half-priced tickets.

Fans can also grab Food City 500 tickets at their neighborhood Food City while supplies last and in doing so can add an extra 500 points to their Food City ValuCards. But act fast, in-store sales end at store closing time on Tuesday, March 31st.  Visit BristolTix.com or call 423-BRISTOL.