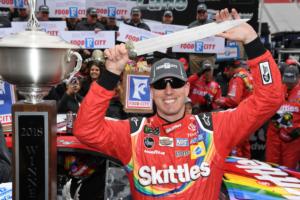 Many of the most heroic tales of racing excellence from The Last Great Colosseum don't involve post-race burnouts, grabbing the checkered flag or hat dances in Victory Lane.

Some of those fabled epics leave would-be champions fuming in a heaping, steaming pile of crumpled metal dreaming of what might have been. Such is life for a NASCAR driver at iconic Bristol Motor Speedway, The World's Fastest Half-Mile.

Consider Kyle Busch's Herculean effort last August during America's Night Race. After being caught up in a twenty-car pileup on the second lap, Busch managed to rally from four laps down at the controls of his No. 18 Joe Gibbs Racing machine and began marching to the front. Fans were hanging on every lap as Busch magically weaved in and out of traffic, skillfully working his way from last place back into contention. It was a Bristol story that nearly became legend.

But just as the most unimaginable comeback ever was about to unfold and add another chapter to Busch's remarkable legacy at BMS, a tire shredded at the worse possible moment, sending his car out of control and crashing out of the race. He was but a few laps short of claiming Cup win No. 8 on the all-concrete high banks.

"The M&Ms Camry was fast, being able to drive up through the field like that with the car torn up, beat up and wrecked and everything else, it was still fast," Busch said after the race. "We had a shot to win the race there, but I got to racing three-wide with guys and couldn't get clear of them and kept getting boxed in by the 11 (Denny Hamlin). Every straightaway I was boxed in and side-by-side, and was stuck and mired in there. We should have never even been in that spot with how banged up the race car was. We probably finished where we should have. We had a shot anyway."

There are many stories just like that one throughout history that have unfolded inside NASCAR's toughest bullring. No doubt there could be another one just like it during the upcoming Food City 500 Monster Energy NASCAR Cup Series race. Busch, the race's defending winner, will be one of the favorites when the green flag drops on Sunday, April 7.

Busch is the winningest driver in BMS history with 21 career victories spread out across NASCAR's top three series. On two occasions at Bristol he has swept all three series races on a single weekend (Aug. 2010 and Aug. 2017), a feat no other driver has ever accomplished in NASCAR history.

After grabbing Xfinity and Truck wins last weekend in Las Vegas, his surging total of 197 career victories stands as a monumental feat and he may very well be past the 200 mark once he arrives in Tennessee to try and add to his total here.

He says he loves racing at Bristol and the track layout takes him back to his roots, racing short tracks across Nevada.

"We grew up at the Bullring (in Las Vegas) and (tracks) like that," says Busch, who used a late race Bristol Bump-n-Run to get past Kyle Larson and take the 2018 Food City 500 victory. "They aren't as banked as Bristol is, but I love going and racing at Winchester (Indiana) and at Slinger (Wisconsin), Salem (Indiana). Those are all really high-banked race tracks that are a half-mile in distance, or a quarter.

"They're really fun to race around and you kind of get a great feel for racing in a bowl. You go down the straightaway, and you slam it into the corners, and you mash the gas, and you kind of sling right back out of the corners. It's a lot of fun to do that. It's kind of an art. Some guys are really good at it, and some find a knack that makes them really good at it and makes it seem easy."

While Kyle won the Food City 500 last year, his older brother Kurt was able to keep it all in the family and snag the win at the Bass Pro Shops NRA Night Race. All of the mayhem that ensued in that race, including Kyle's determined run from several laps down, gave that race the No. 1 ranking on Jeff Gluck's "Was it a Good Race?" fan poll.

The victory added to Kurt's long list of successes at BMS, which was his sixth Cup victory at a track that he proclaimed as "The Holy Grail of Short Tracks."

Kurt, who is now driving the No. 1 Chevy for Chip Ganassi Racing, says as brutal as Bristol can be, it still requires a driver with a good feel for how to finesse the car when necessary.

"The biggest key is knowing when to run hard and when not to run hard," Kurt said last August. "If you try to run hard every single lap, you're not going to make it. There are certain points in the race when you run hard, and there are certain points when you're not necessarily cruising, but just trying to maintain the right pace. You go hard, and then you save a little bit and then you go hard again because you saved a little bit. It's a matter of applying it at the right time."

In four weeks, NASCAR fans will have their first chance to witness short track racing at its best and see the top NASCAR stars such as the Busch brothers, Chase Elliott, Bubba Wallace, Martin Truex Jr., Kevin Harvick, Ryan Blaney, Joey Logano and Brad Keselowski in action during the April 5-7 Food City 500 weekend. In addition to Sunday's Food City 500, the event also will showcase a Saturday doubleheader with the Alsco 300 NASCAR Xfinity Series race and the Zombie Auto 150 NASCAR K&N Pro Series race. On Friday, the Cup Series stars will try to break the BMS track record of 131.668 mph (Denny Hamlin, Aug. 2016) as they qualify during Bush's Beans Pole Day. Friday afternoon's Food City Family Race Night, held at the track, is the longest running fan event on the NASCAR circuit.

And for families who want to bring the entire clan, Bristol Motor Speedway officials are making it easier than ever for kids to have an awesome experience. You'll also want to check out BMS' new teen and college ticket pricing programs as well.  Kids' tickets (12 and under) are free and adult tickets are $10 for Friday's (April 5) Bush's Beans Pole Day. On Saturday (April 6), kids' tickets are free and adult tickets start at $30 for the Alsco 300 NASCAR Xfinity Series race and the Zombie Auto 150 NASCAR K&N Series event. On Sunday (April 7) adult tickets start at $50 for the Food City 500 and kids' tickets are $10. For all races, each child must have a physical ticket in hand to enter the gates. The Bristol Motor Speedway ticket office is the only authorized location that can produce the free kids' tickets.

To purchase tickets to the Food City 500, please call 423-BRISTOL or buy them online at www.BRISTOLTIX.com. For a limited time, tickets can also be purchased directly from any neighborhood Food City store.