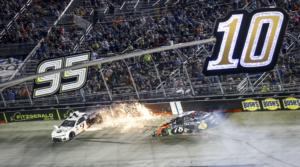 The 2018 edition of the Bass Pro Shops NRA Night Race was one for the ages.

For those who missed it, here's a quick recap: Bristol Motor Speedway dominator Kyle Busch was caught up in a pileup on lap three. Then Kyle Busch rallied from four laps down and nearly won the race. Then Kyle Busch tangled with teammate Martin Truex Jr., ending the 2017 NASCAR Cup Series champ's attempt at a first Bristol win. Then Kyle Busch crashed out of the race for good. Then the forever Bristol Bridesmaid Kyle Larson came from nowhere to challenge for the victory. He almost won. Just when it looked like Clint Bowyer was going to triumph for the first time at The World's Fastest Half-Mile, the other Busch brother, Kurt, emerged from the chaos to claim the coveted Gladiator Sword.

If they could have, every other participant in the field would've hit their "like" button on that comment.

The race was such an intense affair with plot twists and turns everywhere you looked, and just when the thousands of screaming fans thought they had it all figured out - bam - a crazy ending. The race was ceremoniously stamped an 'Instant Classic' by the pundits who make those sort of judgements.

The race was lauded by drivers, fans, media, and many in the NASCAR industry for being amazingly good.

At the time, the race gained an overwhelming groundswell of approval on social media before it was voted No. 1 on veteran NASCAR reporter Jeff Gluck's popular fan poll "Was it a Good Race?" The race achieved a popularity rating of 95-percent by more than 10,200 fans.

Second-place finisher Kyle Larson, drained of energy but managing a huge smile on his face after mixing it up for 500 laps on the all-concrete bullring, famously said, "Bristol is still a badass place…Let's build more Bristols," during his post-race interview.

Kurt Busch was thrilled and pleased that he grabbed the win, which boosted his career victory total to 30 and upped his BMS win total to a half-dozen.

"This track brings out the best in everybody," Busch told media members after winning. "Just to come here and feel that Saturday night atmosphere and racing under the lights, it brings you back to your roots.

"I really love this win tonight, and to have six Bristol trophies is special."

The all-concrete high-banked half-mile oval has been producing incredible racing and thrilling finishes since it was constructed in 1961. However, these days, with the use of the sticky traction compound in both turns, one could argue that it is even more exciting as drivers have a variety of options for getting around the track.

They can choose the high line or the low line. Some even like to stay in the middle. When 40 cars are unleashed after the green flag drops and begin gouging for their tiny portion of real estate and accelerating under full power to grab the lead, that's when the fireworks happen.

In six weeks, NASCAR fans will have another chance to witness short track racing at its finest during the Bass Pro Shops NRA Night Race weekend, August 15-17. In addition to Saturday Night's Bass Pro Shops NRA Night Race, the race also will showcase a Thursday night doubleheader with the UNOH 200 presented by Ohio Logistics NASCAR Gander Outdoors Truck Series race and the Bush's Beans 150 NASCAR K&N Pro Series race. On Friday, the Cup Series stars will try to break the BMS track record as they qualify during Pinty's Qualifying and the NASCAR Xfinity Series drivers will hit the high banks under the lights in the Food City 300.

The Busch brothers, Larson and Bowyer will be joined by a host of rivals looking to win one of the bucket-list majors on the NASCAR Monster Energy Series schedule, including Chase Elliott, recent Chicago winner Alex Bowman, Kevin Harvick, Martin Truex Jr., Brad Keselowski, defending champ Joey Logano and Ryan Blaney, to name a few.

The Food City 300 will help the Xfinity Series determine which drivers will be making the post season. The three top contenders - their own Big 3 if you will - have been dominating the action this year and include Christopher Bell, Cole Custer and defending series champ Tyler Reddick. That trio will be challenged by rising stars Noah Gragson, Austin Cindric, Jeffrey Earnhardt, Ross Chastain and veterans Justin Allgaier and Michael Annett along with Cup Series regular Kyle Busch.

Defending Gander Outdoors Truck Series champ Brett Moffitt, who won recently in Chicago, will set the pace for that division, along with Ben Rhodes, Matt Crafton, Todd Gilliland, Johnny Sauter and Harrison Burton, among others.

The Busch's Beans 150 transitions to a NASCAR K&N Series East race and will showcase many of NASCAR's rising stars, including Sam Mayer, who dominated at Bristol in the K&N Series race in April, Tanner Gray, Ty Gibbs, Hailie Deegan, Drew Dollar, Ruben Garcia Jr., Derek Kraus and Colin Garrett.
During the Bass Pro Shops NRA Night Race weekend you'll definitely want to take advantage of so many activities to make a complete weekend of family fun, including great video entertainment provided by Colossus TV, the world's largest center-hung video screen, premium VIP experiences like the Chairman's Experience, tailgating, a visit to the Kids Zone, on-site camping, concerts, great food and beverages in the concession stands throughout the property, and so much more.