Familiar faces in new places on NASCAR circuit in 2019 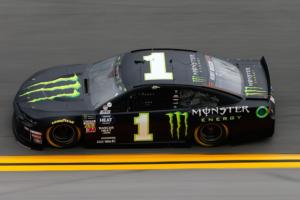 Once in a blue moon the NASCAR world undergoes a swift makeover down in the pit area and it takes race fans a couple of events to get up to speed and fully digest all of the off-season movement.

The 2019 season is one of those years. There are new rules and tons of team personnel swaps in each series.

When NASCAR teams arrive to Bristol Motor Speedway for the Food City 500 weekend April 5-7 - race No. 8 on the schedule - most of the teams that have made personnel moves have had enough time to get familiar with each other as well as get a grasp with the rules modifications.

To help you, the fan, sort out some of the most notable updates, enhancements and improvements for the upcoming season, we have put together this quick cheat-sheet so you can keep track of your favorite drivers and crew chiefs and have a better understanding of NASCAR's innovative competition package.

Many of the headlines this season have been focused on the dynamic  new rules package for the Monster Energy NASCAR Cup Series which features high downforce and varying tapered spacers for horsepower adjustments at the races on the schedule which are contested at tracks that are 1.5-mile or larger. Many of those races will also mandate that air ducts be added to the cars.

Since Bristol Motor Speedway is a high-banked half-mile all-concrete bullring, it will not be a track where teams are required to run the new package. When the Series visits BMS, teams will have basically the same setup that they've used in recent years, which has led to many exciting moments on the half-mile oval.

Last fall the NASCAR Silly Season got out of control for a bit on the Cup Series circuit. More than two dozen teams in the Cup garage made key personnel moves.

The first domino fell when Hendrick Motorsports shook up their lineup by breaking up the longtime championship winning duo of Jimmie Johnson and Chad Knaus. Johnson was paired with new crew chief Kevin Meendering and Knaus was assigned the crew chief job with rising star and 2018 Rookie of the Year William Byron.

"One thing that I did know was that the way things were going and where Chad and I ended up, that needed to change," Johnson said. "It wasn't bringing the best out of either one of us and we weren't delivering like we needed to. I'm just excited to get this fresh start and see where it takes us."

Another high-profile exchange involved Kurt Busch heading to Chip Ganassi Racing's No. 1 Chevy and Daniel Suarez filling his spot in the No. 41 Stewart Haas machine. Martin Truex Jr., whose Furniture Row Team ceased operation following last season, moved over to Joe Gibbs Racing to take over the driving duties of the No. 19 Bass Pro Shops machine.

"When I've switched teams before, it's like starting over a lot of times," Truex said. "For this transition for me, it was a lot easier because we worked so closely together the past couple of years. We've essentially built our cars together. We used all the same stuff - parts and pieces, engines, you name it. I'm familiar with all that."

Some of the other major moves include Ryan Newman heading to Roush Fenway Racing to take over the controls of the No. 6. Meanwhile, Daniel Hemric moves into the second Richard Childress Racing machine and will drive the No. 8 Chevy as he pursues Rookie of the Year honors.

Another talented rookie, Ryan Preece, who won the Xfinity Series race at Bristol last April, moves into the driver's seat of the No. 47 Chevy at JTG Daughtery Racing. A third rookie emerged on the scene when Matt Tifft announced he was driving the No. 36 car for Front Row Motorsports.

Matt DiBenedetto took over for Kasey Kahne in the No. 95 machine and Corey LaJoie filled DiBenedetto's vacant seat in the No. 32 at Go FAS Racing.

Recent Daytona 500 winner Denny Hamlin has a new crew chief in Chris Gabehart, as does Bubba Wallace with Derek Stamets, and Austin Dillon with Danny Stockman.

The biggest move in the Xfinity Series featured the defending season champ, Tyler Reddick. He left his spot on the roster with JR Motorsports for an opportunity with Richard Childress Racing, which allows him to defend his Xfinity Series title as well as run select Cup Series races. Reddick will drive the No. 2 Chevy for RCR in Xfinity Series competition.

With Reddick and Elliott Sadler gone from JR Motorsports, Truck Series standout Noah Gragson was tabbed to take over the driving duties of the No. 9 Chevy that carried Reddick to the season crown.

Chase Briscoe moves to the No. 98 full time at Stewart-Hass Racing, while Austin Cindric takes over season-long driving duties of the No. 22 at Penske. Another Truck Series multi-time winner, Justin Haley, is the new driver of the No. 11 for Kaulig Racing. Meanwhile, John Hunter Nemechek will race for a series title at the controls of the No. 23 Chevy for GMS Racing.

The Xfinity Series will continue to have an Earnhardt presence, as Dale Earnhardt Sr.'s grandson, Jeffrey, has inked a deal with Joe Gibbs Racing to pilot the No. 18 at select Xfinity Series races. He will also compete in select events with Xtreme Concepts Racing, which is aligned with JGR. The fourth generation NASCAR racer has had success so far this season, posting a 15th place finish at Daytona after starting second and leading 29 laps and finishing sixth at Atlanta.

In less than six weeks, NASCAR fans will have their first chance to witness short track racing at its best and see the top NASCAR stars such as Chase Elliott, Martin Truex Jr., Kevin Harvick, Joey Logano and Kyle Busch in action during the April 5-7 Food City 500 weekend. In addition to Sunday's Food City 500, the event also will showcase a Saturday doubleheader with the Alsco 300 NASCAR Xfinity Series race and the Zombie Auto 150 NASCAR K&N Pro Series race. On Friday, the Cup Series stars will try to break the BMS track record of 131.668 mph (Denny Hamlin, Aug. 2016) as they qualify during Bush's Beans Pole Day. Friday afternoon's Food City Family Race night, held at the track, is one of the longest running fan events on the NASCAR circuit.