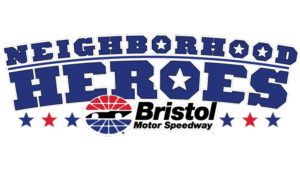 Four Neighborhood Heroes representing first responders and military members from cities throughout the region will be honored during pre-race ceremonies on Saturday, August 17 prior to the start of the Bass Pro Shops NRA Night Race at Bristol Motor Speedway.

The four individuals were selected for the honor for going above and beyond the call of duty in their representative communities and in overseas deployments to make a difference in the lives of others. During the past three weeks BMS officials have traveled to each of the Neighborhood Heroes' respective neighborhoods to make the announcements.

"We're blessed to be able to enjoy what we do because of the efforts of our first responders and military who work tirelessly to protect our freedoms," said Jerry Caldwell, executive vice president and general manager at Bristol Motor Speedway. "We can't thank them enough for their efforts and we're looking forward to celebrating them on the pre-race stage Saturday night at America's Night Race to allow everyone to honor them for what they do to keep America safe."

Each of the BMS Neighborhood Heroes has a compelling story.

Tri-Cities Neighborhood Hero Russell is an 11-year veteran firefighter for the Hampton Valley Forge Fire Department. This past Christmas Eve, Russell was the first firefighter to arrive when responding to a mobile home fire in the Clover Brach area in Elizabethton.

Upon arriving at the scene, Russell observed the mobile home was already burning heavily. Russell checked the structure for anyone inside. A man directed him to an open window, where he saw a woman trying to get out as the flames closed in.

Russell could see the woman was badly burned. He rushed into action and pulled the badly burned woman from the mobile home that was engulfed in flames. She was quickly evacuated from the scene and transported to Vanderbilt University Hospital for treatment of her burns.

Knoxville Neighborhood Hero Roche (pronounced Ro-Shay) is the assistant chief of the Knoxville Fire Department. On Dec. 14, Roche was the first to arrive to a call from Morningside Hill apartments. Roche saw flames coming out a window and quickly went into action when he saw a woman confined to a wheelchair still inside the building. Once he entered the apartment the smoke was heavy, but he was able to locate the woman and carry her to safety.

SFC Cole has deployed four times in support of operations outside the U.S., including Afghanistan, Iraq, and two deployments to Kosovo and has been awarded the Bronze Star Medal, three Army Commendation Medals, four Army Achievement Medals, Senior Aviation Badge and many other ribbons for his service on the deployments.

SFC Cole recently returned from his second Kosovo deployment of 10 months as the primary movement planner, executer and key logistician where he exceeded all expectations of the battalion leadership. His work was key to the successful completion of the mission by the 1-230th AHB.

This weekend, NASCAR fans will once again be able to cheer on their favorite drivers and watch some amazing finishes as the greatest stock car drivers in the world battle on the all-concrete high banks. Bristol dominator Kyle Busch, his brother and defending Night Race winner Kurt Busch, Chase Elliott, Martin Truex Jr., Kevin Harvick, defending series champion Joey Logano, Brad Keselowski, Jimmie Johnson and Ryan Blaney will all be looking to take home the Gladiator sword from The Last Great Colosseum during the Bass Pro Shops NRA Night Race.

BMS' celebration of the Neighborhood Heroes is just one of the highlights you won't want to miss during the incredible weekend. There's so much to do around the grounds of Bristol Motor Speedway, including taking in the Fan Midway, Fan Zone and Kids Zone. There's music, games, food, souvenir haulers, driver appearances and more. There's great video entertainment provided by Colossus TV, the world's largest center-hung video screen. You'll also want to kick back and enjoy some NASCAR-style tailgating with your friends prior to each night's race.

If you want to bring the entire clan out to experience the amazing fun that is America's Night Race, Bristol Motor Speedway officials are making it easier than ever for families to enjoy the weekend. Kids' tickets (12 and under) are free and adult tickets are $35 for Thursday's (Aug. 15) UNOH 200 and Bush's Beans 150 doubleheader. On Friday (Aug. 16), kids' tickets are free and adult tickets start at $35 for the Food City 300 NASCAR Xfinity Series race and Pinty's Qualifying for the Bass Pro Shops NRA Night Race. On Saturday night (August 17) adult tickets start at $70 for the Bass Pro Shops NRA Night Race and kids' tickets are $10. For all races, each child must have a physical ticket in hand to enter the gates. The Bristol Motor Speedway ticket office is the only authorized location that can produce the free kids' tickets. Visit BristolTix.com or call 423-BRISTOL to purchase.