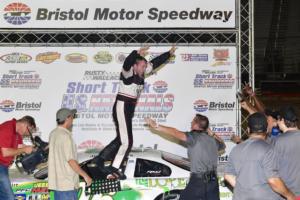 Despite it being only his first time driving the high banks of Bristol Motor Speedway, Josh Reeves was confident he could conquer The Last Great Colosseum in the 2018 edition of the Short Track U.S. Nationals.

In a bizarre 100-lap Pro Late Model race, Reeves took advantage of the circumstances. Veteran NASCAR driver Mike Skinner dominated the early stages of the race, only to have his day end when lapped traffic slammed into his car. While running fourth late in the race, Reeves was the benefactor when a crash took out the top three competitors and led to a major brawl in the pits.

From there, it was smooth sailing for Reeves, who pulled away to grab the victory. When asked to describe his win that evening, Reeves didn't hold back.

"Man, the emotions I've felt just in the past hour have been the complete opposites of the spectrum," Reeves said. "Without a doubt, this is the biggest win of my career."

Reeves returns to BMS looking to become a repeat winner in his No. 96 Pro Late Model machine fielded by local team owner Wade Lopez. During a luncheon with local print media, the Abingdon, Va. resident stressed one key word: patience.

"I drove the race very patiently, waiting for opportunities," said Reeves. "We were 10th and then we were fourth. Soon enough we were in the lead. Patience is key in these short track races and I plan to employ the same strategy again this weekend."

While Reeves, a native of Bassett, Va., may not originally be from the area, he was quick to point out his reverence for Bristol Motor Speedway. With his team based in Abingdon, Reeves knows the importance of having success at The World's Fastest Half-Mile, a track unlike anywhere else.

"Driving at Bristol Motor Speedway is like riding a rollercoaster," Reeves said. "You feel every turn and everything comes quickly. There's absolutely nothing like it."

With an impressive field set for Saturday night's Pro Late Model 100-lap feature, Reeves has his eye on one name in particular: Mike Skinner. The 1995 NASCAR Truck Series champion and veteran Cup Series driver is the most experienced Bristol driver of the pack and Reeves knows how important a win would be to Skinner after his disappointing result last season.

"Skinner is going to come back just as fast," said Reeves. "It's going to be important that we be better as well and stay on pace with him."

To purchase tickets for the Short Track U.S. Nationals please contact the Bristol Motor Speedway ticket office at (866) 415-4158. Tickets can also be purchased online at www.BristolTix.com.