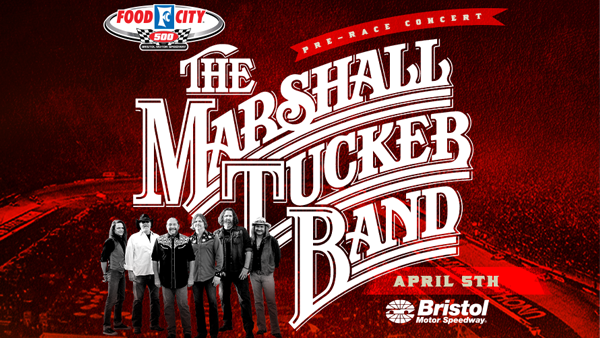 The legendary Marshall Tucker Band will perform prior to the milestone 60th running of the Food City 500 on Sunday, April 5th as the official pre-race concert headliner, it was announced today by Bristol Motor Speedway officials. The group will take the stage at 12:20 PM during the BMS Pre-Race Pit Stop, a festive party held on the main stage in the center of the infield, facing the front-stretch grandstands.

"We're thrilled to announce The Marshall Tucker Band as the pre-race concert for the Food City 500," said Jerry Caldwell, executive vice president and general manager of Bristol Motor Speedway. "This group essentially invented Southern Rock and their massive following of fans continues to flock to their national concert tour every year. Most can sing their iconic songs by heart."

The Marshall Tucker Band got its start in Spartanburg, S.C. and wowed critics and influenced major country acts like Alabama, The Kentucky Headhunters, Confederate Railroad, and Travis Tritt, among others, with its definitive blend of rock, rhythm & blues, jazz, country, and gospel.

Now, thanks to the expanding scope of today's music, a new generation of fans is learning what the rest of their fans have known for so long - that good music knows no boundaries. Along the way, the band has recorded more than 20 studio albums, three DVDs, numerous live albums and many compilations.

Original band member Doug Gray continues to lead the current group of fine musicians, winning new young fans as well as satisfying the loyal fans of several generations. With hit singles like "Heard It In a Love Song," "Fire On The Mountain," "Can't You See," and "Take The Highway," The Marshall Tucker Band earned seven gold and three platinum albums while they were on the Capricorn Records label.

During the '90s, the group scored four hit singles on Billboard's country chart and one on Billboard's gospel chart. Their music has also been featured on the soundtracks of movies such as Smokey and the Bandit, Blow, The Pursuit of D.B. Cooper, Shipwrecked, Crank 2, Don't Mess with Zohan, Stop Loss, Swing Vote, Taking Chance and many others as well as many TV Shows.