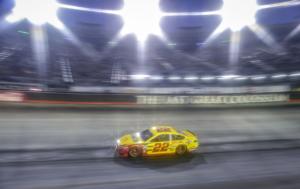 Joey Logano says that anytime he experiences the highest level of success on the racetrack, a sudden burst of energy just comes pouring out of him uncontrollably. He describes it as an out of body experience.

He went to that very rare zen place last November after winning his first Monster Energy NASCAR Cup Series championship. In that moment of euphoria, he trades words and phrases for a more primitive response.

"Just a lot of screaming," Logano said. "I think I pulled a muscle."

A few years earlier at Bristol Motor Speedway, Logano experienced that same rush of adrenaline and post-race elation after capturing his first checkered flag at the iconic all-concrete half-mile bullring.

It was another time that he was overcome in a screaming fashion, overjoyed to grab a victory at The World's Fastest Half-Mile.

"You know you come across the line at Bristol and it's such a big win here, that I'm kind of at a loss for words, so I just scream," Logano said after winning the Bass Pro Shops NRA Night Race in 2014. "There's just so much raw emotion that comes out of nowhere."

Logano, now with a NASCAR championship ring firmly secured to his finger, will be looking to once again experience a thrilling victory that produces a ton of screaming on Sunday, April 7 at Bristol Motor Speedway during the running of the Food City 500.


With two Night Race victories at BMS, Logano would love to add a Food City 500 trophy to his case. He says you really know you've earned something special when you are presented a Gladiator Sword in Victory Lane at The Last Great Colosseum.

"Winning at Bristol, it's such a driver's racetrack," he continues. "It's such a tough place to get around. You've got to think about 500 laps around that place. It's like, so long, and you're just shot at the end of it, mentally and physically, and your car is wore out and you're trying to get everything you can. There's rubber everywhere, and you're trying to stay out of that, but you're trying to run fast laps, and trying to work around other cars. You never get a break."

It's a track that seems to fit Logano's style of racing. He has performed well there over the years. He has nine top 10s in his last 13 starts at BMS, including the two victories. In the two races last year he finished ninth and fourth respectively, and led 95 laps of the August race.

"What makes Bristol so much fun to go around is that you can drive around this place four or five different ways and have a lot of speed no matter how you drive it," he said. "It's what fits your style and the setup of your car."

And speaking of cars, Logano will be bringing a brand new No. 22 Pennzoil machine to Bristol this year. During Daytona Speedweeks, the car performed very well, finishing third in the Clash, winning his Gander RV Duel and placing fourth in the prestigious Daytona 500.

"I think it showed (at Daytona)," Logano said. "Our team is continuing the momentum from the championship. I think that's a really good thing."

However, Logano knows that his championship season is in the rearview mirror. He's already mentally shifted gears and is fully focused on the 2019 season.

"You have that on your side that makes you feel more confident in yourself. I think that's a good piece. Like I've told everyone though, that's all last year, all washed out. We're all back at zero right now.

"It was great, we rode the wave, enjoyed it (and) had a lot of fun. But it's over. We're past champions. We need to try to be the new champion this year."

In only seven weeks, NASCAR fans will have their first chance to see Logano and other top NASCAR stars such as Chase Elliott, Martin Truex Jr., Kevin Harvick and Kyle Busch in action and witness short track racing at its best during the April 5-7 Food City 500 weekend. In addition to Sunday's Food City 500, the event also will showcase a Saturday doubleheader with the Alsco 300 NASCAR Xfinity Series race and the Zombie Auto 150 NASCAR K&N Pro Series race. On Friday, the Cup Series stars will try to break the BMS track record of 131.668 mph (Denny Hamlin, Aug. 2016) as they qualify during Bush's Beans Pole Day. Friday afternoon's Food City Family Race night, held at the track, is one of the longest running fan events on the NASCAR circuit.