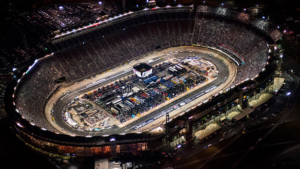 Following the final short track race of the 2019 season, Dale Earnhardt Jr. once again shared his love for the art of short track racing. He's not alone; short track action breeds excitement and that was evident this year, especially at Bristol Motor Speedway.

The "Holy Grail of Short Tracks", as Kurt Busch described The Last Great Colosseum during his 2018 August win, was the place to be in 2019. During April's Food City 500, race fans saw battles throughout the field, including a brotherly duel for the victory. Kyle Busch was able to hold off Kurt to grab his eighth career Cup victory at BMS. Kyle Busch now sits just one win away from tying Rusty Wallace, Dale Earnhardt Sr. and Cale Yarborough for second on the all-time Bristol Cup wins list.

Just a few months later, race fans were in for a treat as Matt DiBenedetto came oh so close to grabbing his first career victory at the Bass Pro Shops NRA Night Race, just days after finding out he would be without a ride next year. While eventual race winner Denny Hamlin caught DiBenedetto and relegated the popular driver to a second place finish, the duo put on a show for the fans as they battled for the win. This followed a night of close racing and chaos for numerous drivers in the field.

Since it was constructed in 1961, the all-concrete high-banked half-mile oval has been producing incredible racing and thrilling finishes. However, these days, with the use of the sticky traction compound in both turns, one could argue that is even more exciting as drivers have a variety of options for getting around the track like never before.

These options make it a likelihood that edge-of-your-seat moments await once again in 2020. The Food City 500 on Sunday, April 5 brings NASCAR's best back to Northeast Tennessee for the first short track battle of the year. With three short track events in the NASCAR Cup Series playoffs, the Food City 500 will serve as a good barometer for teams and their short track program. And with the Bass Pro Shops NRA Night Race moving to Saturday, Sept. 19 as the playoff cutoff race for the Round of 16, the intensity will rise like never before for drivers trying to continue their drive for a championship. So if you want to see the gladiators of NASCAR battle at the toughest short track there is, you want to make your way to Bristol in 2020. You won't regret it.

To purchase tickets to Bristol Motor Speedway, please call 423-BRISTOL or buy them online at www.BRISTOLTIX.com.