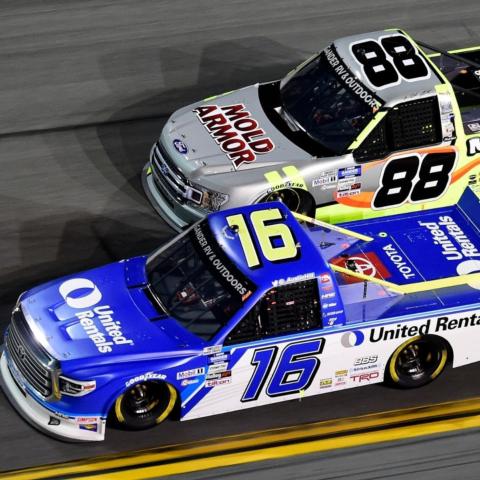 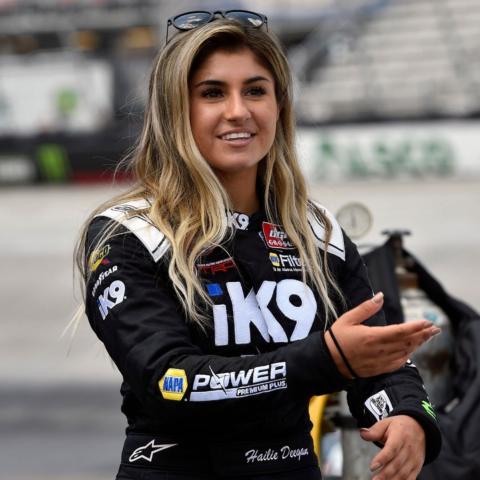 Hailie Deegan will be one of the ARCA Menards Series drivers to watch in Thursday night's Bush's Beans 200.

Last week there was a Tiger and a Kangaroo on the loose in Eastern Tennessee, but as far as NASCAR Gander RV & Outdoors Truck Series regular season champ Austin Hill is concerned, the biggest, baddest animal of them all in this part of the country is the legendary Bristol Motor Speedway.

The iconic all-concrete high-banked half-mile bullring will bare its teeth when it hosts the first race in the Truck Series seven-race Playoffs on Thursday, Sept. 17, with the UNOH 200 presented by Ohio Logistics. The race, which will not have fans in attendance, will be broadcast live on FS1, MRN Radio and Sirius XM NASCAR Radio starting at 7:30 p.m. ET.

Hill, who had a solid regular season in his No. 16 Hattori Motorsports entry with one victory, eight top-fives and 14 top-10s, is ready to get the Playoffs rolling, but admits anything can happen at Bristol Motor Speedway, and it usually does. He says trying to tame that track is a heck of a challenge.

“Bristol is one of those animals that we haven’t really figured out yet,” Hill said. “We ran in the back half of the top 10 all night long last year. That’s one of those unknown races for us that we’re going into and just try to get as many points as we can. We’ve been working really hard on our short track program and I think it showed at Gateway and at Richmond. Hopefully we can keep it up.”

Before Hill’s track-best effort of 10th last season, he had posted Bristol finishes of 19th, 22nd and 21st in his three previous attempts. With crew chief Scott Zipadelli calling the shots in the pits, and the regular season trophy on his shelf, Hill heads to Bristol with more confidence than ever.

“Track position means a lot at Bristol, and I have struggled on the long runs there making speed,” Hill said. “I worked a lot on my racecraft over the off-season and all of this year on what I can do as a driver to be better at Bristol.”

Hill has emerged on the scene as a contender week in and week out this season and says there’s no overnight sensation chapter in his story. He says he is in championship contention through lots of hard work and perseverance.

“After winning Daytona last year we went through a really bad spell with engine issues,” Hill said. “This year we’ve hit our stride. Every weekend we felt like we’ve been in contention for wins. The consistency this year has been good. It’s great to have a year under your belt with your crew. We’ve been jelling really good. It’s nice to have the regular season championship, but we still want to get that trophy at the end of the season too.”

In this Playoff run, Hill is hoping to improve on his career-best sixth-place points finish from a year ago.

“As the regular season champ, it’s really nice to have those extra bonus points in the playoffs to lean on,” Hill added. “That’s one thing that we didn’t have last year and it kinda bit us in the Round of 6. We missed the final four by just a couple points.”

One of Hill’s biggest challengers is Grant Enfinger, who won the regular season finale at Richmond last weekend for his third victory of the season. The 2019 series runner-up could be hitting his stride at just the right moment. He has a solid record at Bristol with two top-fives and another top-10, but admits the team has been working to improve their short track program.

“We love the short tracks but we’ve struggled on them a little bit and haven’t been able to contend for wins at short tracks so it was nice to have some speed (at Richmond),” Enfinger said. “It’s nice to get a win at Richmond. Not only for the momentum it gives us in the Playoffs, but to also check a box for the feel that I’m looking for at a short track.”

One of the hottest drivers in the Truck Series is veteran Ben Rhodes in the No. 99 ThorSport Racing entry. Rhodes won at Darlington two weeks ago and feels like he had the truck to beat at Richmond this past Thursday night after leading a race-high 66 laps, but finishing third. He certainly feels like momentum is on his side heading to Thunder Valley.

“Richmond really lit a fire under all my guys since we feel like we should’ve won it and didn’t,” Rhodes said. “They’ve been working their butts off, and we hope to keep the momentum going.”

Rhodes has posted four top 10s in five career Truck Series starts at Bristol. His track-best effort of fifth came during the 2017 UNOH 200. He’s looking to improve on his career-best series championship finish of fifth which he has achieved twice – last year and in 2017.

Many of short track racing’s rising stars, like Hailie Deegan, Ty Gibbs, Sam Mayer and Drew Dollar, will hit the track following the Truck Series race to compete for the win and an opportunity to earn a coveted BMS Gladiator Sword in the Bush’s Beans 200 in the ARCA Menards Series. Race officials announced recently that this race, which is scheduled as the 9:30 p.m. nightcap on Thursday, will be increased by 50 laps to a 107-mile distance. The Bush’s Beans 200 will be televised live on FS1.

Gibbs, the grandson of team owner Joe Gibbs, has been strong this season in his No. 18 machine with four victories, while Mayer has claimed four wins in his No. 21 Chevy. Mayer won both K&N East Series races at Bristol last year and has been strong at short tracks so far this year with three victories at Toledo Speedway, including one this past weekend, and a victory two weeks ago at I-44 Speedway in Lebanon, Missouri.

Bret Holmes took over the points lead with a fourth place finish this past weekend, and is followed by season long leader Michael Self, who claimed two wins at Daytona this year, but dropped to second in points after a seventh place effort Saturday. Deegan, Dollar and Thad Moffitt rounded out the top-five. Mayer, who has only competed in 11 of the 15 events to date, moved to seventh in points with the win. Mayer is expected to pull double-duty on Thursday at Bristol, competing in both the Truck and ARCA races.

One other top contender in the ARCA race at Bristol is Chandler Smith, who finished second to Mayer Saturday night in Toledo. Smith has two wins and seven top fives in the ARCA Series this year in his No. 20 entry owned by Billy Venturini. Like Mayer, Smith also will pull double-duty Thursday and drive the No. 51 Kyle Busch Motorsports entry in the UNOH 200.

West Coast racer Deegan, who is a fan-favorite in the series in her No. 4 machine, has posted three top-fives and 13 top-10s this season. In two K&N Series starts at Bristol in 2019, Deegan posted finishes of 16th and 9th.

“I feel like this is the most I’ve ever learned on the East Coast, racing from the back to the front,” said Deegan after her second of two starts at BMS in 2019. “Hopefully, I will be racing at Bristol for years to come.”

In addition to the Trucks and ARCA races, the race weekend also will feature the iconic Bass Pro Shops NRA Night Race, which is the first cut-off race in the NASCAR Playoffs as well as the regular season finale in the NASCAR Xfinity Series, the Food City 300.

The NASCAR Xfinity Series drivers, headed by Austin Cindric, Chase Briscoe, Justin Allgaier, Noah Gragson and Ross Chastain, will battle to improve their positions for the Playoffs in what promises to be a dramatic and exciting regular season finale, Friday night, Sept. 18, during the Food City 300 at 7 p.m. (NBCSN, PRN Radio, Sirius XM Radio). When the checkered flag falls, the 12 Playoff drivers will be set in the Xfinity Series.