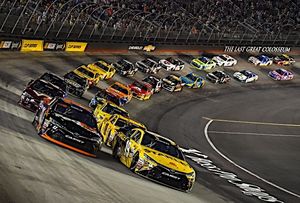 As the calendar reaches the second half of August, it can only mean one thing: it's once again time for the Bass Pro Shops NRA Night Race week.

Guests from all 50 states will descend upon East Tennessee this coming week to celebrate the end of summer and to witness some of the best racing on the planet. The electric atmosphere under the lights of The Last Great Colosseum is second to none and that will be on display once again.

"This is always one of my favorite times of the year," said Jerry Caldwell, executive vice president and general manager of Bristol Motor Speedway. "We get to see our friends from all over the United States, the beautiful starry Appalachian skies on a warm August night and the flash of the cameras in the grandstands as 40 race cars come to life at the start of the green flag. There's nothing quite like the Bass Pro Shops NRA Night Race week."

To view a schedule of all events and activities during the Bass Pro Shops NRA Night Race week, check out the BMS Fan Schedule at http://www.bristolmotorspeedway.com/fans/fan-schedule/.
Highlights of the race week include:

Fitzgerald Peterbilt Transporter Parade: Watch on Thursday, Aug. 16 as the colorful haulers from the Monster Energy NASCAR Cup Series make their way from The Pinnacle to Bristol Motor Speedway down Hwy 11 E/Volunteer Parkway through the city of Bristol. Celebrating its 20th year, the Fitzgerald Peterbilt Transporter Parade is a spectacle complete with fireworks as thousands of fans line up to see these big rigs make their way towards The World's Fastest-Half Mile. Haulers are scheduled to depart The Pinnacle at 9 p.m. and arrive at the Speedway around 9:30 p.m.

Food City Race Night: One of the longest-running (Food City celebrates its 30th year of sponsoring the event) and most popular fan fests on the circuit, Food City Race Night takes place on Thursday, Aug. 17 from 1-9 p.m. in downtown Bristol. The event will feature driver appearances, games, food/craft vendors and more. Visit www.FoodCity.com/racing for more information.

Musical Entertainment: Race fans will be in for a treat as the likes of Cody Jinks and The Steel Woods take to the stage. Jinks brings his southern rock and outlaw country sound to the Bass Pro Shops NRA Night Race pre-race concert while The Steel Woods will rock out with the fans on the Trackside Live stage in the Fan Zone following the conclusion of the Food City 300 NASCAR XFINITY Series race on Friday night.

Trackside Live/BMS Stage: A fan favorite has returned to the Fan Zone. The Trackside Live stage is a go-to spot for driver appearances, fun family-friendly games and concerts. NASCAR.com will also broadcast a live 1 hour show on the stage on both Friday and Saturday from 4-5 p.m.

Souvenir Haulers: Back by popular demand and located in the Fan Zone, the souvenir haulers are the best place to grab collectibles and the latest gear from the top drivers in NASCAR.

Young Guns Autograph Sessions: On Wednesday, Aug. 16 get your favorite up-and-coming drivers autograph from competitors in the UNOH 200 and Bush's Beans 150. The NASCAR Camping World Truck Series autograph session is scheduled for 1 p.m. and will feature drivers Matt Crafton, Ben Rhodes, Harrison Burton, Noah Gragson and Kaz Grala among others. The NASCAR Whelen Modified Tour session is scheduled for 4:45 p.m. Both autograph sessions will take place inside Gate 14 at the Darrell Waltrip A-B Mezzanine.

Racing Action: Some of the best drivers in the world hit the high banks at one of the most demanding circuits in racing with action in the Monster Energy NASCAR Cup Series (Bass Pro Shops NRA Night Race), NASCAR XFINITY Series (25th anniversary of the Food City 300), NASCAR Camping World Truck Series (UNOH 200) and the NASCAR Whelen Modified Tour (Bush's Beans 150).

Dale Earnhardt Jr: The Bass Pro Shops NRA Night Race week will also be the last chance for fans to see Dale Earnhardt Jr. race around the concrete high banks of Bristol. Guests will be in for a treat though as Junior pulls the doubleheader: racing in both the NXS and MENCS events. During the week, guests will have numerous opportunities to help Bristol honor Earnhardt Jr including: