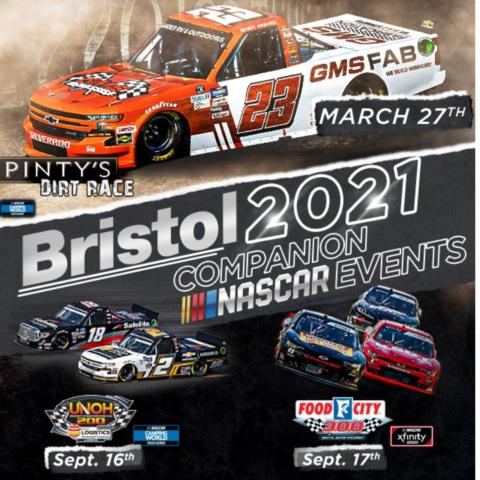 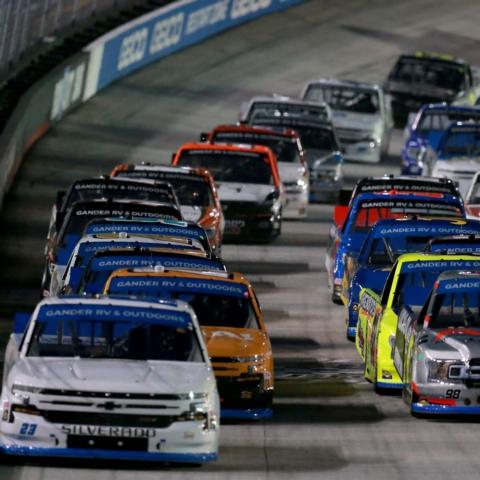 The NASCAR Camping World Truck Series will visit BMS two times in 2021, including the Pinty's Dirt Race on Saturday, March 27 and the UNOH 200 on Thursday night, Sept. 16. 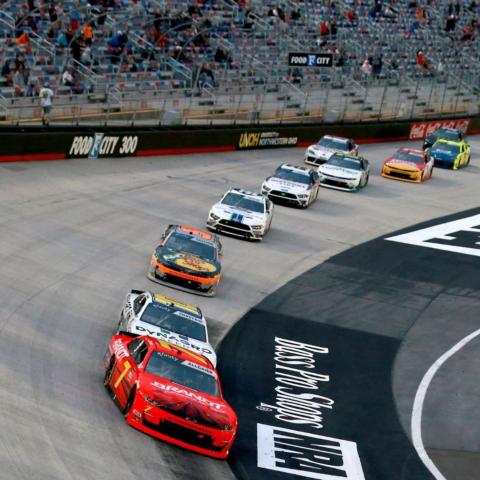 The NASCAR Xfinity Series will hold its regular season finale at BMS on Friday night, Sept. 17, with the Food City 300.

The NASCAR Camping World Truck Series will join the dirt racing fun at Bristol Motor Speedway in 2021 it was announced today by track and NASCAR officials. The Pinty’s Dirt Race will be held Saturday, March 27, as the primary companion race to Sunday’s Food City Dirt Race in the NASCAR Cup Series. That much-anticipated race will showcase the Cup Series on a dirt racing surface for the first time in more than 50 years.

Canadian-based Pinty’s Delicious Foods, whose premium chicken products are available at all Food City stores, increases its partnership with BMS through this agreement, as the company has previously sponsored Pinty’s Cup and Xfinity Series qualifying during the fall race weekend and the Pinty’s U.S. Short Track Nationals late model racing weekend.

“We are thrilled to add the NASCAR Camping World Truck Series to what promises to be an historic weekend of dirt track racing in March at Bristol Motor Speedway as we officially kick-off our 60th anniversary celebration,” said Jerry Caldwell, executive vice president and general manager of Bristol Motor Speedway. “The Truck Series has several years of dirt track racing experience under their belts from the many laps they’ve logged at Eldora, so we expect those drivers to adjust quickly to the challenge presented by the dirt high banks in the Pinty’s Dirt Race.”

The Pinty’s Dirt Race will be one of two events held on a clay surface during the 2021 NASCAR Camping World Truck Series, as the circuit will also visit the track in Knoxville, Iowa.

“We are pleased to increase our partnership with Bristol Motor Speedway by becoming the entitlement sponsor for the Pinty’s Dirt Race featuring the NASCAR Trucks,” said Tony Spiteri, vice president of marketing/research & development, Pinty’s Delicious Foods. “We expect the Trucks to put on one heck of a show at Thunder Valley in March and hope all of the NASCAR fans out there will add some delicious Pinty’s chicken to their race weekend menus.”

Both the NASCAR Camping World Truck Series and the NASCAR Xfinity Series will support the Bass Pro Shops NRA Night Race NASCAR Cup Series Playoff race in September. All of the September races will be run on BMS’s traditional high-banked concrete oval.

“We are looking forward to another major NASCAR Playoff weekend at Bristol Motor Speedway in September and are proud to welcome back the Food City 300 and the UNOH 200 race as the lead-in events to the Bass Pro Shops NRA Night Race Cup Series Playoff race,” Caldwell said. “There was so much drama and excitement surrounding all three of those races this year that we can’t wait to see what unfolds here with post-season implications on the line in 2021.”

Season ticket packages for both 2021 NASCAR weekends at Bristol Motor Speedway are on sale now, and fans can also purchase single tickets for any of the NASCAR events scheduled on those weekends. To purchase tickets, please click here or call the BMS Ticket Sales Center at (866) 415-4158.