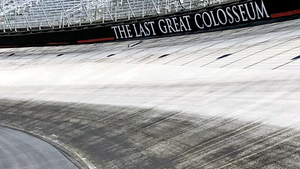 For many in the NASCAR industry, last August's Bass Pro Shops NRA Night Race will fondly be remembered as the moment when Bristol Motor Speedway got its groove back.

Its lower groove, that is.

Bristol Motor Speedway officials announced just prior to the August 2016 race week that minor modifications had been made to its racing surface. The innovative process was geared to provide more traction at the bottom of the race track so that drivers in all three of NASCAR's top touring series could firmly plant their race cars on the lower groove of the .533-mile oval.

The result was immediately enjoyed by both drivers and race fans. With enhanced grip at the bottom of the track, more exciting side-by-side racing ensued.

"It gave the drivers a lot of options where you could drive the car and make it work," said Harvick after coming from a 24th starting spot to win his first Bristol Night Race. "I was able to come up through the field because of that. And Friday night was probably one of the best Xfinity Series races I've ever watched. I'm really glad to see Bristol back where it is."

"I think it definitely has opened everybody's eyes to saying, all right, that worked pretty darned good," Harvick continued. "You could hold your ground and you could get past lapped cars. It gave everybody an option to do something different, and as a driver, that's what you want. You want options. You don't want to get stuck behind a car that’s four or five tenths slower than you after you’ve just run them down from a half a lap and can’t pass him. It was exciting."

In last August’s wild Xfinity Series race, Austin Dillon held on to win an ultra-competitive Food City 300 under the Friday night lights. He echoed Harvick’s comments during his post-race press conference, saying that the racing was better with the lower groove in play.

"First of all, I’d like to say hats off to Bristol for really doing their job to try and make this race as good as possible," Dillon said. "It really was. I feel like the fans had to love it. It ended up being a race on the bottom."

Jerry Caldwell, executive vice president and general manager at BMS said there was great collaboration with industry stakeholders and the driver’s council to move forward with the prep process.

"We applied the treatment to the lower groove in the four turns and coming out of the straightaways," Caldwell said. "The substance really just helps rubber stick to the track. And then we brought in a tire machine that we used to drag the track for a while to get rubber down and give drivers some grip so they can get down there and hang with that upper groove."

The inventive track prep technique will be utilized again in 2017 as BMS readies for the Food City 500 weekend, April 21-23.

“We were very pleased with the results last August and we are looking forward to preparing the track in the same fashion this April," Caldwell said. “We received a lot of positive feedback from drivers and others in the industry, as well as our fans. We’re looking forward to more thrilling side-by-side racing at the upcoming Food City 500.”