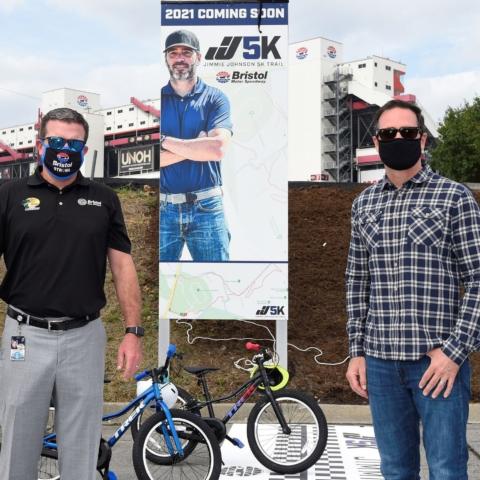 Seven-time champion Jimmie Johnson, who will retire from full-time competition in the NASCAR Cup Series following the 2020 season, will be honored in two ways by Bristol Motor Speedway officials it was announced Saturday prior to the start of the Bass Pro Shops NRA Night Race.

In addition to the trail, the track, in partnership with Trek and Food City, also will donate 48 bicycles in Johnson’s honor to area children through Santa Pal in Bristol, Virginia and other charities in Tennessee that receive support from BMS’ chapter of Speedway Children’s Charities.

“Jimmie has meant so much to the sport of NASCAR over the years and has had incredible success, including two victories and a number of top-10 finishes here at Bristol Motor Speedway,” said Jerry Caldwell, executive vice president and general manager, Bristol Motor Speedway. “We wish Jimmie all the best in his retirement and we couldn’t think of a better way to honor him and preserve his legacy with NASCAR fans who visit The Last Great Colosseum than by creating the ‘JJ 5K Trail at Bristol Motor Speedway’ and making an impactful donation of 48 bicycles in his name to a local children’s agency.”

“That is awesome, that’s super cool,” Johnson said when he helped Caldwell unveil the sign for the JJ 5K Trail at Bristol Motor Speedway. “And my kids ride that same bike.”

Johnson will start in 24th position in row 12 as he makes his final start as a full-time driver in Saturday’s Bass Pro Shops NRA Night Race (7:30 p.m., NBCSN, PRN Radio, Sirius XM NASCAR Radio), the first cut-off race in the Round of 16 in the NASCAR Cup Series Playoffs.

Johnson will try to grab one more victory at The Last Great Colosseum, and his first in America’s Night Race during what he says has been an unusual year. He narrowly missed the Playoffs for only the second time in his career this season and has posted four top-fives and nine top-10s.

“It’s a different year to say the least, but I think we’ve made the most of it,” Johnson said. “I choose to look at the silver linings that have come out of 2020. I’m kind of dressed differently than I would typically be at the track because I was able to go to my kids’ horse show this morning. I wish the fans were here with us and we could have a normal weekend. I’m very thankful to the track for this honor. I know that 48 kids will be really happy to have a bike. I’ve done a lot of running around this track, so I’m excited to know that people can hit the 5K route when they are here and get some exercise in as well.”

“Food City is proud to have the opportunity to honor Jimmie Johnson with the donation of these bicycles to Speedway Children’s Charities. Jimmie has been a great champion in NASCAR Motorsports, and we wish him all the best in the next chapter of his life.  Food City is a long-time partner of Speedway Children’s Charities and we are so grateful for the great work they do throughout our community,” said Kevin Stafford, Food City vice president of marketing.

“We are very excited to be a part of this event,” said Eric Bjorling, Trek director of marketing and public relations. “Jimmie has been a fantastic advocate for cycling and ensuring that the next generation has access to bikes and that safe places to ride will help create a healthier future for many people.”