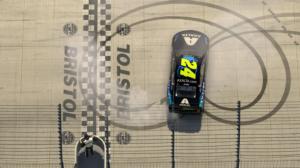 Byron won the first 50-lap heat race with a big lead over his challengers to earn the pole and then led most of the laps in the 150-lap main feature of the eNASCAR iRacing Pro Invitational Series race. It was the third iRace event for the Cup stars since traditional racing was halted by the COVID-19 pandemic.

Byron, who has 1,500 races of experience under his belt in iRacing, led 116 laps of the event and cruised to the checked flag in the closing laps. After leading the first 75 laps Byron pitted, then with fresh tires worked his way back into the lead with 42 laps to go. He passed Chris Buescher and never looked back. It was a bit of redemption for Byron, who was bumped out of the way last week on the final lap at virtual Texas Motor Speedway as Timmy Hill took the win.

"It was a lot of fun and we had a pretty solid race," said Byron, who will receive a traditional BMS Gladiator Sword for earning the victory. "We had to work though some track position and keep ourselves near the top five. Luckily we were able to do that. We got by Chris Buescher and were able to manage the restarts. Was really proud of how we worked through things today."

Byron, who drove the No. 24 Axalta Chevy, said the virtual Bristol Motor Speedway is challenging, especially for some of his Cup peers, many of whom have limited experience in sim racing.

"It's tough. There's some that's different (with virtual Bristol) but a lot that's similar," Byron continued. "This is one of the tracks I love coming to in the Cup car. Working on this track in the simulator during the off-season was helpful. To be able to run in front of a good group of guys and have some fun was really special. To finally close the deal (and win an iRacing Pro Series Invitational race) is really awesome. It's cool for my sponsors and gives me some confidence."

There were 12 cautions in the 150-lap main event, including one on the second lap that collected one of the pre-race favorites, Ryan Preece. Preece, who was second in a photo-finish in the second heat race to Nemechek, managed to rebound from the setback and finished sixth overall.

Tempers flared on social media between Daniel Suarez and Kyle Larson after the race. The two were parked after a series of run-ins on the track. iRacing officials disqualified both after they kept banging into each other under caution after a lap 75 skirmish.

Byron said his biggest moment of the race was narrowly avoiding a crash with Landon Cassill who got spun while in the lead on lap 78. Byron was able to slip past most of the carnage, which he expected to see some of during the race.

"You saw some guys that weren't as experienced get into it," Byron said. "The top five or 10 guys really know what they are doing and those were the ones I was really worried about."

Clint Bowyer, who claims to be one of the least experienced iRacers on the track, managed to use a strategy of avoiding wrecks to finish 11th. He was also mic'd up with the FOX announcing team of Mike Joy, Jeff Gordon and Larry McReynolds during the iRacing event. He said The Last Great Colosseum really showed its teeth today.

"There's only one guy who leaves Bristol happy," Bowyer said, "and that's the winner. Everybody else leaves mad. It was a lot of fun and it's a really challenging race track in virtual racing as in real life."

Parker Kligerman finished seventh and was followed by Tyler Reddick, Garrett Smithley, Michael McDowell to round out the top 10. Kyle Busch, who has eight Cup Series victories at BMS, ran strong at points in the race and was in the top five several times but ended up finishing 18th after being involved in a few cautions, including the final one with nine laps to go that sent him to the back of the pack.

Heat Race 1
Byron ran away with the first 50-lap heat race. He led every lap and took the checkered flag 1.664 seconds in front of second place Christopher Bell and third place Dale Earnhardt Jr. to claim the pole position for the 150-lap main.

"We had a good qualifying lap; the track was a little different for the heat race," Byron said after the heat race. "I feel good. It's going to be a pit strategy race. Looks like John Hunter is really fast and Ryan Preece, so those are the guys I'm looking out for. It's going to be tough with having twice the field. I'm going to have to navigate my way through. I'm going to have to make sure I time my runs and get position on someone and not worry about my right rear."

Heat Race 2
Nemechek had a good lead in the second heat race but by the end of the 50-lapper he was tracked down by hard-charging Preece, who started the heat in fourth place. In an exciting side-by-side run to the finish line over the final three laps, Nemechek was able to hold off Preece by .006 of a second as the checkered flag dropped. Nemecheck led every lap and with the win earned the outside pole for the 150-lap main.

"The last few laps were difficult," Nemechek said. "Denny bounced off the wall in front of me and the car got tight after that. I tried to stay on the high line. Preece ran me clean, because he could've doored me, but it was a good clean race down to the end."

Following second place Preece was hard-charging Kyle Busch, who started sixth and worked his way to the front at the controls of his No. 18 M&Ms machine. Larson was fourth, followed by Hill.