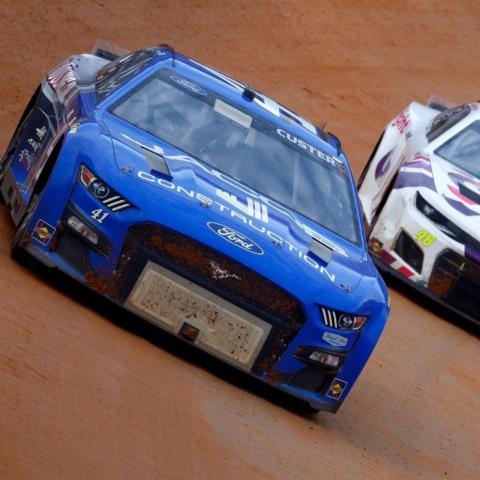 Custer surged from fifth to second moments after a restart with six laps left in the qualifying race. He finished second to Tyler Reddick, who took the lead from Ross Chastain on Lap 5.

“The guys did a great job guessing right on the track,” Custer said. “It's so much different than practice, and we hit on it. It's just awesome, first career pole, I never thought I'd get my first career pole at a dirt race.”

Dirt track ace Christopher Bell will start from the outside of the front row after winning the second heat from the fifth starting position. Bell worked the bottom of the track adroitly and passed Joe Gibbs Racing teammate Kyle Busch for the lead on Lap 10.

Bell earned 14 points for his effort to edge Reddick, who won the first heat from the fourth starting spot, worth 13 points. Reddick will start third with Chase Briscoe, Custer’s Stewart-Haas Racing teammate to his outside.

Briscoe started seventh and finished third in Qualifying Race #2 to earn 12 points. Kyle Larson, whose dirt track resume includes victories in the Chili Bowl Nationals, Knoxville Nationals and Kings Royal, among others, earned the fifth starting position in an owner points tiebreaker over Justin Haley (sixth) and Ty Dillon (seventh), who won the third and fourth heats, respectively, both from second on the grid.

“I feel like we had the toughest heat race,” said Larson, who started sixth and came home third in Heat 4. “I was happy to get to third. My car doesn't feel bad. The track will go through a lot of changes tomorrow, so just keep up with that and adjust your driving style accordingly.”