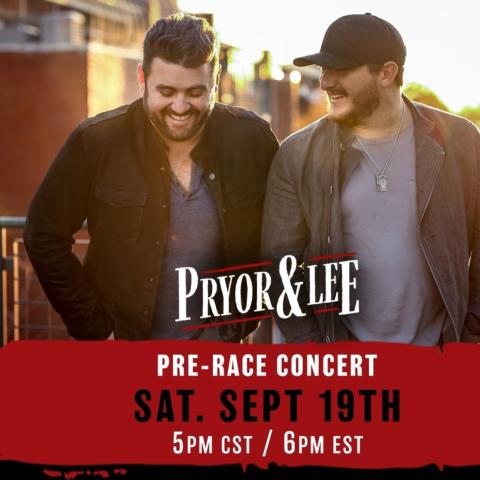 The hour-long pre-race concert, the first for BMS events in 2020, will start at 6 p.m. The duo will perform on the roof top of the BMS Media Center in the track’s infield, safely distanced away from fans and participants.

With the release of their first single to Country radio, “Y’allsome” was praised by American Songwriter who declared, “Pryor & Lee bring some overdue rowdy to country radio with their debut single “Y’allsome.” The song is written by hit-songwriters Rhett Akins, Marv Green, and JT Harding, produced by Doug Johnson and Chip Matthews, and is digitally available now.

“We are beyond excited to be able to bring live music back to NASCAR fans this season and playing the Bass Pro Shops NRA Night Race at Bristol Motor Speedway is a dream for us! We know y’all are gonna bring it and we’ll be ready to help hype up the energy before that first lap,” Pryor & Lee said about the opportunity to perform at The Last Great Colosseum, where many country greats have graced the stage including Kenny Chesney, Joe Nichols, Randy Houser, Old Dominion, The Band Perry, A Thousand Horses and Travis Denning to name a few.

Their performance at Bristol Motor Speedway will be their third NASCAR track appearance as they played at the Daytona 500 in February and then also sang prior to the Cup Series race at Auto Club Speedway in Southern California on March 1st.

Pryor Baird and Kaleb Lee were brought together as roommates on NBC's singing competition The Voice and eventually began performing together, sparking an undeniable musical connection. The two artists finished in the top six in season 14 and were still pursuing solo careers while joining each other’s tour dates from time to time to perform as a duo. Ultimately, they decided to combine Baird's electric guitar skills and “growly bluesypipes and stellar vocal range” (Rare Country) with Lee's “soulful and whiskey-soaked vocals” (Billboard) to create a fresh sound with a throwback vibe and officially become a duo. Pryor & Lee signed a record deal with Black River Entertainment (Kelsea Ballerini) in January of 2020 and they had just started their “Country’s Back” tour together before the pandemic hit, stalling their plans. For more information on Pryor & Lee, visit www.pryorandlee.com and follow them on Instagram, Facebook , Twitter, and YouTube.

The race weekend features Playoff action in the NASCAR Cup Series and NASCAR Gander RV & Outdoors Truck Series while the NASCAR Xfinity Series will have its season finale and the ARCA Menards Series will showcase some of the best future stars of the sport in the Bush’s Beans 200.

On Saturday night, the NASCAR Cup Series stars will be battling for Playoff survival during round number three of the NASCAR Cup Playoffs in the 60th running of the Bass Pro Shops NRA Night Race (7:30 p.m., NBCSN, PRN Radio, Sirius XM NASCAR Radio).

The NASCAR Xfinity Series drivers, headed by Austin Cindric, Chase Briscoe, Justin Allgaier, Noah Gragson and Ross Chastain, will battle to improve their positions for the Playoffs in what is expected to be a dramatic and exciting regular season finale, Friday night, Sept. 18, during the Food City 300 at 7 p.m. (NBCSN, PRN Radio, Sirius XM Radio) When the checkered flag falls, the 12 Playoff drivers will be set in the Xfinity Series.

Many of short track racing’s rising stars, like Hailie Deegan, Ty Gibbs, Bret Holmes, Sam Mayer and Drew Dollar, will hit the track on Thursday night after the Truck Series race for the Bush’s Beans 200 in the ARCA Menards Series. Race officials announced recently that this race, which is scheduled as the 9:30 p.m. (FS1) nightcap on Thursday, will be increased by 50 laps to a 107-mile distance.