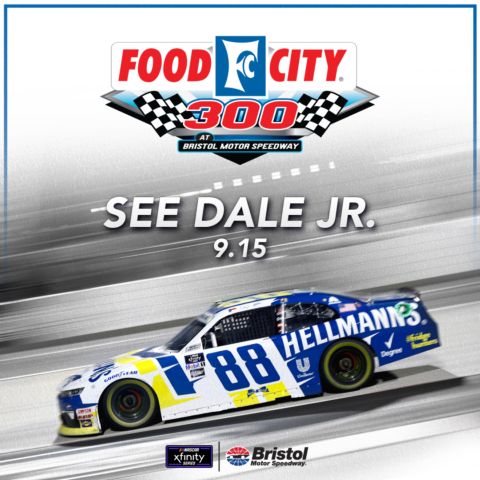 The two-time Xfinity Series champ, who famously coined the phrase “It’s Bristol, Baby!” after winning the 2004 Night Race in the Cup Series at BMS, will drive his No. 88 JR Motorsports Chevy in the race under the lights on the famed Northeast Tennessee short track.

“I love the high banks of Bristol,” said Earnhardt Jr., who also won an Xfinity Series race at Bristol in 2004, the Food City 250. “When I was a little boy and watched dad race, out of all the races when I was a kid, the Bristol Night Race was the one I didn’t want to miss. It’s just electric there and I would always beg dad to go to that race.”

The last time Earnhardt raced at Bristol was in 2017, where he pulled double-duty competing in both the Cup and Xfinity Series races that weekend. Earnhardt Jr. has competed in at least one NASCAR Xfinity Series race each year since 2001. He has run at least one Xfinity race with sponsor Unilever since 2009, and this year he chose Bristol after racing at Martinsville (2022), Richmond (2021 and 2018), Homestead (2020) and Darlington (2019) since his retirement in 2017.

“We are thrilled to have Dale Jr. back in action on the famed high banks in the Food City 300 during our September NASCAR race weekend,” said Jerry Caldwell, president of Bristol Motor Speedway. “He is such a legend in the sport and has meant so much to fans in our region. We can’t wait to see him in action on the track in his No. 88 Chevy.”

It will be a busy weekend for Earnhardt Jr. at Bristol as he will also call the action during the Bass Pro Shops Night Race at BMS on Saturday night, Sept. 16 (7:30 p.m. USA Network and PRN Radio) as a race analyst for NBC Sports.