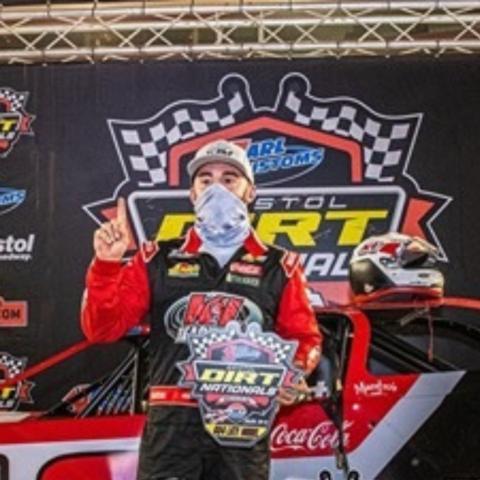 Austin Dillon won a 10-lap heat race and the 20-lap feature in the 604 Late Model class on Tuesday in the Karl Kustoms Bristol Dirt Nationals.

The first features of the inaugural Karl Kustoms Bristol Dirt Nationals are in the books, with ten drivers becoming the first winners on a dirt covered Bristol Motor Speedway in nearly twenty years, including NASCAR Cup Series star Austin Dillon.

The ProFABrication 602 Late Models kicked off the first set of features on Tuesday night, as Sunshine State natives Trey Mills and Brenden Smith led the first feature to the drop of the green.

The 12-year-old Mills built a lead of a half of a straight away before John Brooks lost a podium spot due to a wreck on the frontstretch.

Gage Griffin gained the runner-up position on the restart, and held it through another caution period one circuit later.

Griffin closed in on Mills for the lead before the final caution with eight laps complete.

Curtis Thomas took the second spot on the restart, though he and Griffin went door-to-door through the halfway point.

Logan Walston took the final spot on the podium one round later, as Mills continued on to victory by over a second over Griffin. Walston rounded out the top five.

It was seven years after Bristol last held dirt racing when Mills was born.

Spencer Singleton held off a hard charging Cass Fowler late in the second feature to earn his spot in Saturday’s main event.

Seth Wimpey had a big lead erased late in the third and final 602 feature, but continued on to victory over Dustin Diem.

In the Velocita-USA Modified division, Wisconsin’s Tyler Wilson and California’s Jerry Flippo were the first to the stripe at for the first of three qualifiers.

Flippo took the early lead, and brought Iowa’s Justin O’Brien with him into the runner-up spot.

The lead duo pulled away from the rest of the field, but O’Brien relentlessly stalked Flippo for the top spot through seven circuits.

O’Brien’s first attempt at the lead came the following lap, as he peeked to Flippo’s inside.

Flippo remained the leader as the battle for the lead caught up to the rear of the field, but a caution saved Flippo from have to protect the lead in lapped traffic.

Ricky Alvarado made a stab at the second spot on the following restart, but O’Brien closed back in on Flippo after the latter pushed hard on the exit off of turn two near the halfway point of the twenty lapper.

The field re-stacked one final time after the last caution of the race with four rounds remaining.

Mark Noble moved past Alvarado for the final spot on the podium as Flippo continued on to victory over O’Brien.

Kyle Heckman made it two-for-three for the Golden state, as he won qualifier number two over Minnesota’s Aaron Johnson, while Iowa’s JD Auringer dominated the final feature over Clay Money.

In Tire Demon by Love Tap Sport Mod action, Cody Smith of Texas, and Minnesota’s Adam Bohlman led the field to the start of the first of three qualifying features.

Trey Stamper used a lap three restart to climb from seventh to first in the opening three circuits.

On the following restart, Brady Bjella charged from fifth to second as Stamper built a two-and-a-hald second lead by the halfway point.

Bjella caught Stamper in traffic, running to the leaders inside down the backstretch with a lap and a half remaining.

Bjella took the lead on the final trip down the backstretch, stealing the win late in the eighteen lap event by two-tenths of a second.

NASCAR star Dillon capitalized on a late restart to win his heat race in the the 604 Late Model division, earning enough passing points to score the pole position for the opening qualifying feature. Dillon lead every lap of the 20-lap event, the final feature of the evening.

"It was fun," Dillon said after the win. "It was a blast out there. I wanted to see how the track would evolve. I thought these were perfect conditions out there. I hope we get this next Sunday. It was a fun race track tonight and we saw some great racing out there as well."

Dillon and several other NASCAR regulars, including Joey Logano, Corey LaJoie, Cole Custer, Austin Hill, Matt Crafton and Chris Buescher competed in the event on Tuesday in a variety of classes. Those drivers will race next weekend during the historic Food City Dirt Race weekend, that features the NASCAR Cup Series Food City Dirt Race on Sunday at 3:30 p.m. (FOX and PRN) and the Camping World Truck Series Pinty's Truck Race on Dirt on Saturday night at 8 p.m. (FS1 and MRN).

The inaugural Bristol Dirt Nationals continues Wednesday morning with racing action beginning at 9 a.m. You can catch all the action live on XR at racexr.plus.