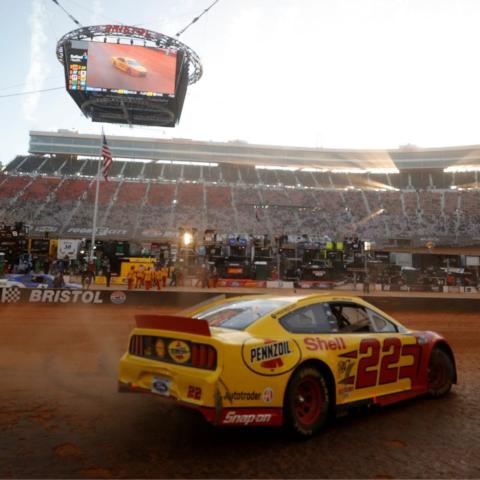 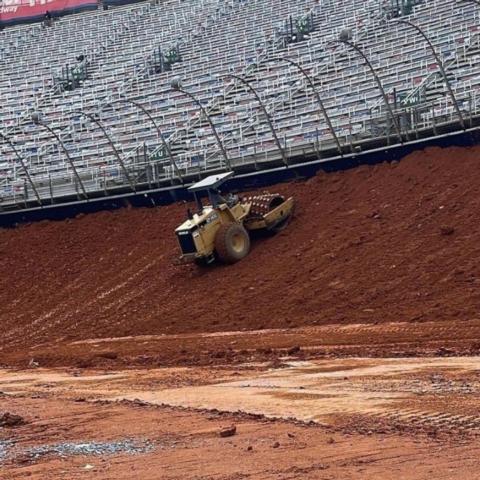 BMS Ops Team members have already begun the process of placing the dirt around the iconic half-mile oval for the upcoming Food City Dirt Race, April 17 and a host of other key dirt races in the spring. 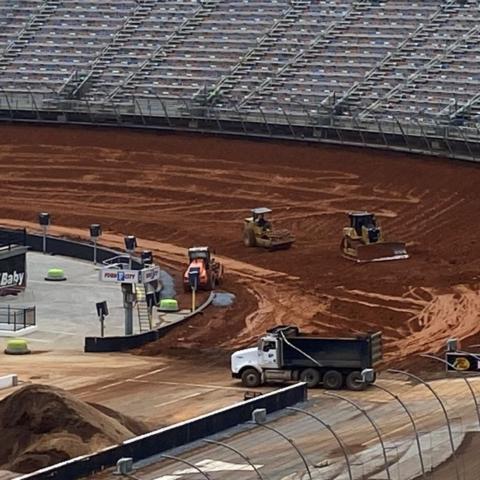 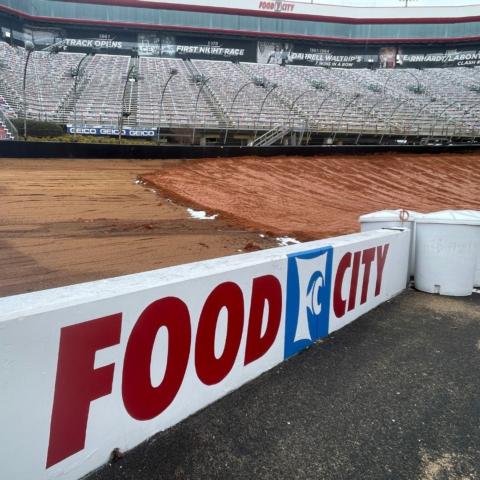 Only a few weeks into the new year and the Bristol Motor Speedway Ops Team has put on their dirt moving construction uniforms once again and are busy transforming The Last Great Colosseum into a premier dirt racing showplace.

The team, along with several key vendors, including longtime partners Baker’s Construction Services and Meade Tractor, have begun placing the sawdust and dirt around the iconic high-banked half-mile oval in preparation for the much-anticipated Food City Dirt Race on Easter night, April 17.

The process began in early January after all of the Pinnacle Speedway In Lights displays were stored away. After laying a protective barrier of sawdust, the team is now putting down the initial layers of dirt. This process will continue for a few more weeks before the track is deemed ready for race mode.

It is the second consecutive year that the NASCAR Cup Series stars will compete on the natural surface that once was the primary track choice back in the sport’s early days. However, this will only be the second time that the Cup Series has been featured on dirt since Sept. 30, 1970, when Richard Petty won at the North Carolina State Fairgrounds near Raleigh.

Certainly, Logano will be one of the pre-race favorites, as will defending series champ Kyle Larson, who is a major dirt aficionado, along with last year’s second-place finisher and another dirt racing lover, Ricky Stenhouse Jr., and Daniel Suarez, who led 58 laps last year in his No. 99 Trackhouse Racing Chevy before finishing fourth. Several other drivers, like Christopher Bell, Austin Dillon, Chase Briscoe and Alex Bowman, will be ones to watch as they all have solid dirt backgrounds.

The track will be configured in much the same fashion as it was last year, with 19-degree banking in the turns and a 50-foot wide racing surface. One of the key differences with this year’s race versus last year is the time the event will be held, both the day and the time of day. Steve Swift, Speedway Motorsports senior vice president of operations and development and the project leader of the track conversion, says he is looking forward to moving the event to a couple of weeks later on the calendar and also holding the race under the lights.

He’s also got his fingers crossed that the weather will cooperate this time around. Last year’s race had to be moved to Monday after a massive deluge of rain washed out both Saturday and Sunday’s scheduled racing.

“Last year there was a lot of buildup and excitement because it was something that had never been done before,” Swift said. “This year we are looking forward to building on that buzz and hopefully having the event without interference from Mother Nature. We are looking forward to a great weekend with great weather, and now with the race being a night race, we feel confident we can have the ideal conditions to put on a great dirt show.”

The Food City Dirt Race, which entitlement sponsor Food City will celebrate a milestone of 30 years as the spring Cup race sponsor at BMS, will be televised in prime time on Sunday evening after most are finished with their Easter traditions. The race, which will give NASCAR’s new Next Gen car its first official race on dirt, is scheduled for a green flag start at 7 p.m. on FOX and will also be broadcast on PRN Radio.

On Saturday night (April 16), the stars of the NASCAR Camping World Truck Series will take the dirt spotlight in the Pinty’s Truck Race on Dirt. The race will take the green flag at 8 p.m. and be broadcast on FS1 and MRN Radio. Martin Truex Jr. took the victory in the Pinty’s Truck Race on Dirt last year at the controls of the No. 51 truck for Kyle Busch Motorsports. To purchase tickets for the NASCAR weekend, please click here.

Prior to the NASCAR dirt weekend at BMS, the track will host the second annual Karl Kustoms Bristol Dirt Nationals, March 20-April 2. The event, which gives grassroots racers across the country the chance to experience Bristol dirt and has expanded to two weeks of racing, will feature Super Late Models, Sport Mods, Stock Cars, Modifieds and Hobby Stocks the first week, and then Super Late Models, Open Modifieds, Street Stocks, Hornets and Factory Stocks the second week. For more information on the Karl Kustoms Bristol Dirt Nationals, please visit www.bristoldirt.com.