Bristol Dragway President Jerry Caldwell presents the Legend of Thunder Valley plaque to Don "The Snake" Prudhomme to officially induct him into the historic track's hall of fame. 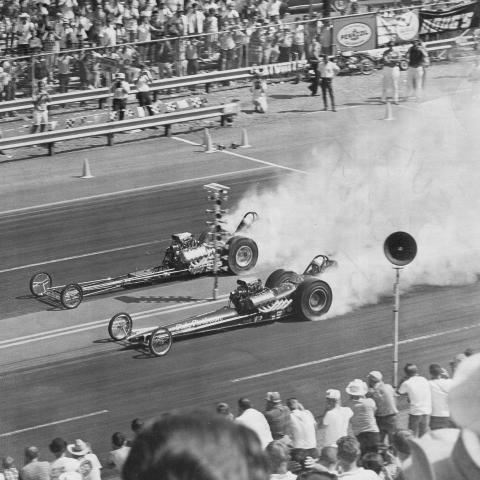 Prudhomme says his 1967 NHRA Top Fuel victory against "Sneaky" Pete Robinson at Bristol put him on the map in the drag racing world. Photo by NHRA 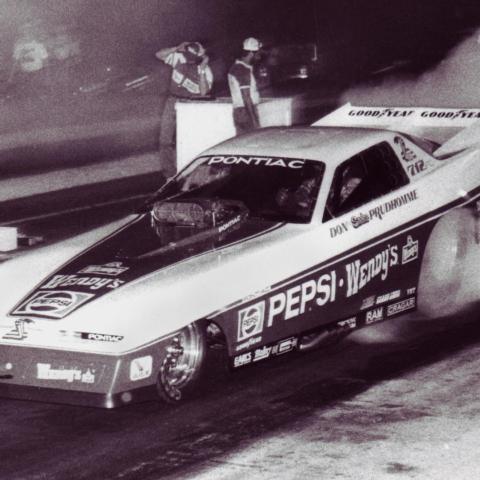 In 1985 at Bristol Prudhomme rocked the drag racing world by powering to a Funny Car speed record of 266.27 mph, faster than Top Fuel at the time. 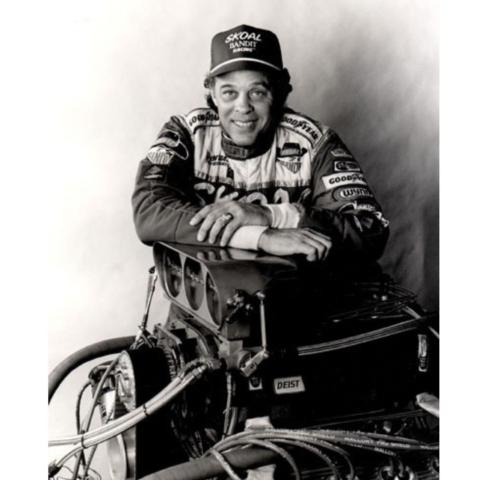 Don Prudhomme won 49 NHRA races and four NHRA Funny Car world championships. At Bristol he won three races as a driver and team owner in more than 10 final round appearances. 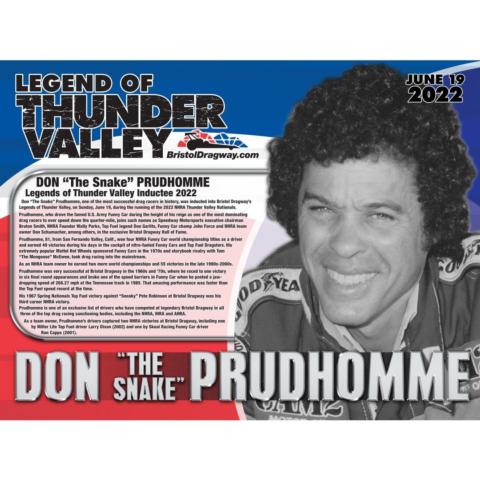 Bristol Dragway presented Prudhomme with a plaque to commemorate his induction into the Legends of Thunder Valley. 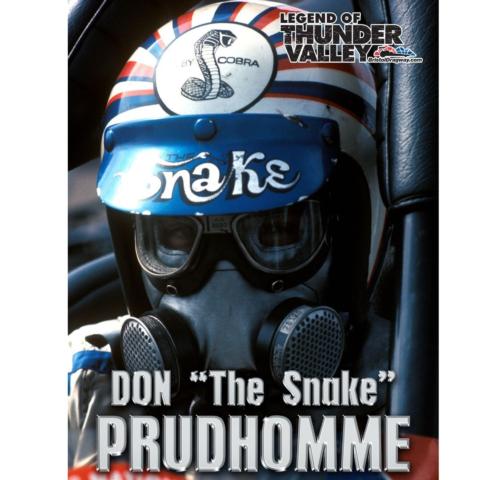 Prudhomme used special hero cards to sign autographs during his time at Bristol Dragway on Sunday afternoon following his induction into the Legends of Thunder Valley.

Don “The Snake” Prudhomme, one of the most successful drag racers in history, was inducted today into the prestigious Legends of Thunder Valley by Bristol Motor Speedway & Dragway President Jerry Caldwell.

Prudhomme, who drove the famed U.S. Army Funny Car during the height of his reign as one of the most dominating drag racers to ever speed down the quarter-mile, joins such names as Speedway Motorsports executive chairman Bruton Smith, NHRA Founder Wally Parks, Top Fuel legend Don Garlits, Funny Car champ John Force and NHRA team owner Don Schumacher, among others, in the exclusive Hall of Fame at historic Bristol Dragway.

“Don accomplished so much at Bristol Dragway over the years and has been such an icon in the world of drag racing and we are so honored to have him here at Thunder Valley as our special guest this weekend,” said Caldwell. “His records and achievements are incredible, and if ‘cool factor’ was an official stat he would be the undisputed world-wide leader in that category and that’s why we are all in awe of him. We are thrilled and very proud to induct him today into the Legends of Thunder Valley.”

Prudhomme, 81, from San Fernando Valley, Calif., won four NHRA Funny Car world championship titles as a driver and earned 49 victories during his days in the cockpit of nitro-fueled Funny Cars and Top Fuel Dragsters. His extremely popular Mattel Hot Wheels sponsored Funny Cars in the 1970s and storybook rivalry with Tom “The Mongoose” McEwen, took drag racing into the mainstream.

As an NHRA team owner in the late 1990s and early 2000s he earned two more world championships and 55 victories. As a team owner at Bristol Dragway, Prudhomme’s drivers captured two NHRA victories, including one by Miller Lite Top Fuel driver Larry Dixon (2002) and one by Skoal Racing Funny Car driver Ron Capps (2001).

Prudhomme was very successful at Bristol Dragway in the 1960s and ‘70s, where he raced to one victory in six final round appearances and broke one of the speed barriers in Funny Car when he posted a jaw-dropping speed of 266.27 mph at the Tennessee track in 1985. That amazing performance was faster than the Top Fuel speed record at the time.

“This is such an honor, I have always loved Bristol Dragway and I came here to race for the first time as a kid basically,” Prudhomme said. “I want to thank everyone here at the track for this and I look forward to having my name up there among all those legends for many years to come, long after I’m gone.”

His 1967 Spring Nationals Top Fuel victory against “Sneaky” Pete Robinson at Bristol Dragway was his third career NHRA victory and one that Prudhomme says was an important win in the early days of his career.

“That win in 1967 really stands out to me because that’s the one that really launched my career and put me on the map,” Prudhomme said. “Bristol has always been a place that when you win it’s a big deal and after that win I started getting noticed and recognized all across the country.”

Prudhomme is one of an exclusive list of drivers who have competed at legendary Bristol Dragway in all three of the top drag racing sanctioning bodies, including the NHRA, IHRA and AHRA.