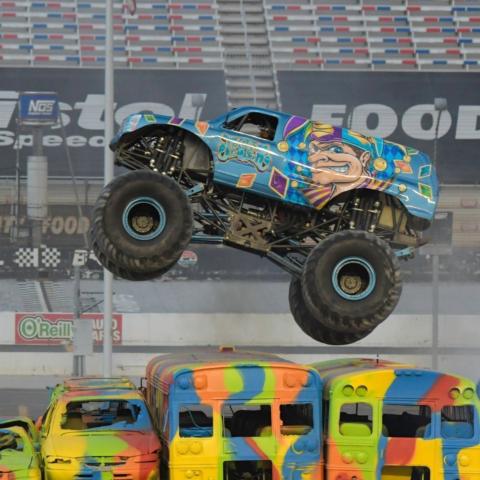 Tyler Toney, aka "The Beard" drove this Monster Truck during Chaos at The Colosseum Friday at BMS. 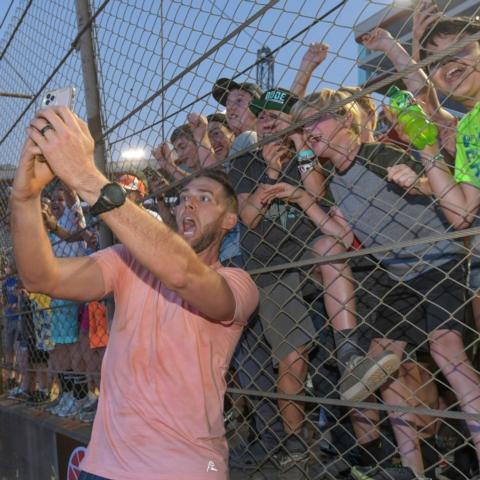 Cody Jones, aka "The Tall Guy" poses for a selfie with fans Friday at BMS during the Dude Perfect show. 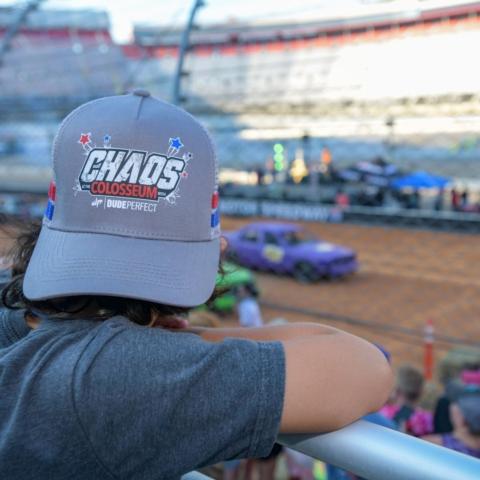 More than 15,000 fans came out for the Dude Perfect Chaos at the Colosseum show at BMS Friday. 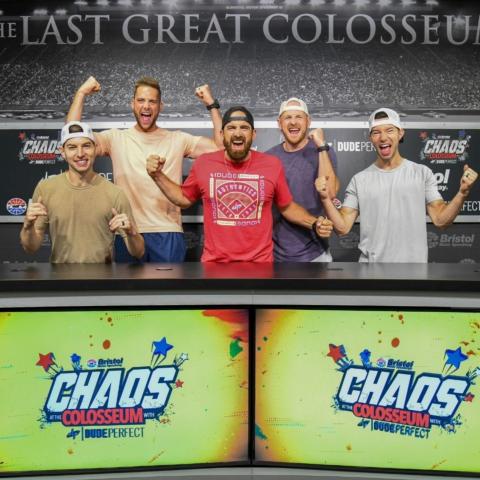 There have been many memorable moments that have taken place on the backstretch of Bristol Motor Speedway over the years. On Friday night, the dudes from Dude Perfect had a smash-banging good time on the iconic racetrack during their special Chaos at the Colosseum event, which was presented by Food City, Coca-Cola and BODYARMOR.

As part of a night of hilarious comedy, fun challenges and a wide variety of motorsports demonstrations, the dudes filmed a live challenge in front of the more than 15,000 fans who came out to The Last Great Colosseum to enjoy their antics and hi-jinx. It was the first time Dude Perfect has filmed a challenge in front of a live audience and their performance didn’t disappoint.

Four of the members – Tyler Toney, Garrett Hilbert, Cody Jones and Cory Cotton – were joined by Kevin “Sparky” Sparkman, widely considered the “sixth” member of Dude Perfect, to participate in an epic five-car demolition derby on the famed Bristol dirt while Colby Cotton emceed the affair. The live BMS challenge, which will air in the future on their YouTube channel, had dirt flying as the big sedans careened into each other. You definitely don’t want to miss that challenge once it airs on the Dude Perfect YouTube channel to see how it all turns out as the ending was dramatic and BMS fans played a big role in determining the winner.

The show opened with Tyler Toney, aka “The Beard,” making a grand entrance at the controls of a high-horsepower Monster Truck called The Jester. In a bucket list activity, he performed some of the smaller jumps placed throughout the infield to open things up, then closed the show by climbing back aboard Jester and taking on the biggest jump while fireworks blasted off in the distance. Another monster truck, The Kraken, also put on quite a show for the fans during the event, as it soared high during a freestyle run with plenty of big jumps and skillful pirouettes.

In the dudes’ first competition, all team members were driving Bass Pro Shops TRACKER OFF ROAD side-by-side utility vehicles in the UTV Punt Challenge. A field goal from the 2016 Pilot Flying J Battle at Bristol was positioned in the BMS infield and the dudes would drive their UTVs ,which were adorned with special nose-pieces, at speed to try to punt large bouncy balls through the goalposts. All of them aced the 10 and 20-yard attempts, but once the 30-yard distance came up only Cory and Coby remained in the challenge. The pair had a thrilling overtime shootout to decide the winner with each one taking several attempts before Cory was able to get a favorable wind and knock his final ball through the uprights.

In another challenge, twins Cory and Coby Cotton participated in a football toss where they tried to get nerf footballs into a large trash can that was positioned inside the motorized Food City Shopping Cart. Coby eventually won the challenge as he lobbed a perfect spiral that bounced off the back side of the cart and into the trash barrel. Earlier a young fan named Max from North Carolina took on several fans and won a similar nerf toss challenge into the Food City cart from a closer distance.

The show also featured the high-soaring Team FMX motocross riders, which put on two demonstrations that included many stunts like cliff-hangers, heel-clicks and the fan-favorite backflips. There was also two drifting exhibitions from the cars from East Tennessee Drift that got fans on their feet. At the end of the second drift run, Cory, Garrett and the popular Dude Perfect mascot, Panda, all jumped into the passenger seats of two of the drift cars and the popular Rat Rod IV drift pickup truck, and had an impromptu drift challenge, which Cory’s car was eventually declared the winner after some intense drifting action.

The beloved Panda also got the crowd going by joining the dudes in shooting Dude Perfect stress balls into the grandstands with a Gatlin-gun style gift launcher.

DJ Sterl the Pearl, from the University of Tennessee football team, served as the official DJ for the event, mixing up some great jams and keeping the crowd pumped, while Speedway Motorsports announcer Jose Castillo kept things "spicy" all night while serving as the emcee.