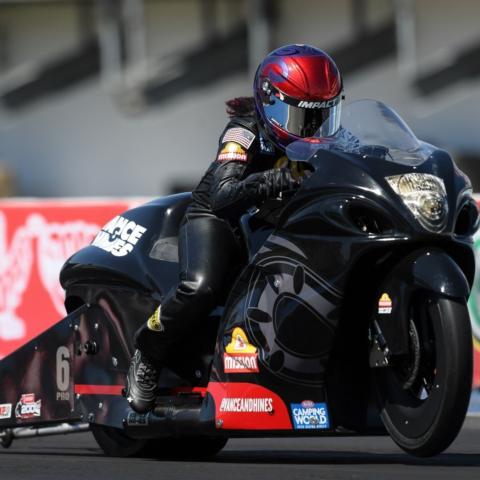 Three-time Pro Stock Motorcycle champ Angelle Sampey is one of the favorites in the two-wheel category as it makes a return to historic Bristol Dragway for the NHRA Thunder Valley Nationals, Oct. 15-17. 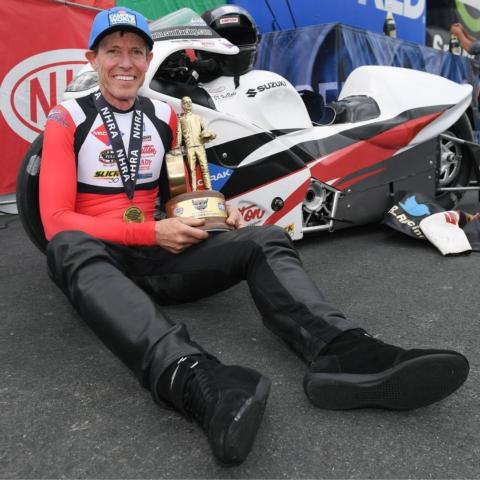 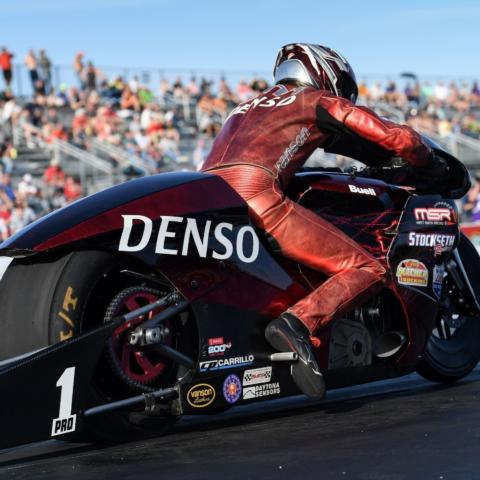 The popular category’s only appearances at Bristol came via two exhibition races, in 1999 and 2000, as part of the former all-star Winston Showdown that famously pitted Top Fuel dragsters vs. Funny Cars in eliminations. Matt Hines won both of those PSM races and there are only two active riders currently who competed in those events back in the day.

Ironically both riders return to Bristol Dragway for the 20th annual NHRA Thunder Valley Nationals, Oct. 15-17, in an intense battle for the 2021 Pro Stock Motorcycle world championship crown. Series leader Steve Johnson and three-time world champ Angelle Sampey are currently separated by only 17 points and both are looking for strong showings at the Tennessee quarter-mile to improve their positions in the NHRA Countdown to the Championship playoffs.

Past champions Matt Smith and Eddie Krawiec are also in the conversation for the coveted series crown, as both riders sit less than 40 points out of first place in the standings.

Sampey, one of the most popular racers in NHRA history, is also the most successful female competitor ever in NHRA with 44 career victories and 53 No. 1 qualifying positions. This season she has raced to one victory and two runner-up finishes on her Vance & Hines Suzuki. She claimed her only win of the year at the recent event at zMAX Dragway in Charlotte, N.C. Her two runner-up finishes came at Pomona, Calif and Indianapolis, two of the sport’s most revered venues.

She is ready for more success at Bristol Dragway, as well as really eager to be able to visit some old friends and make some new ones.

“I’m looking forward to racing the bike there, to see the fans we haven’t seen in a while as well as meet some new race fans who haven’t had the chance to see us before,” Sampey said. “I think Tennessee is a big motorcycle place for us because I remember when we would go to Memphis we had a lot of fans there. I’m hoping we have a lot of support at Bristol, and I’m looking forward to finding that out.”

With championship points up for grabs and the possibility of national records given the expected cooler weather conditions in Northeast Tennessee at that time of year, the Playoff action could reach a fever pitch. Sampey feels like she is ready to add another championship trophy to her collection.

“Vance and Hines gives me everything I need to win a championship,” Sampey said. “Sometimes I feel like I’m working for NASA because the team I have around me is that good. I just need to do my part on the bike and I think we can get to where we need to be.”

It’s a near certainty that the track’s Pro Stock Motorcycle track records will be broken. Both performance marks were set back in 2000, and although unofficial due to the event not being an official series points race, it’s quite possible that every bike that makes a run down the track will post performances better than the 7.275 second elapsed time and 187.36 mph. Matt Hines holds the E.T. mark while current NHRA Top Fuel driver Antron Brown holds the PSM speed mark at Bristol.

The current NHRA PSM national records are 6.720 seconds by Andrew Hines and 205.04 mph by Matt Smith.

“I think the No. 16 qualifier bump spot won’t even be near that slow,” Sampey said with a smile. “It will be exciting to be able to set some track records.”

The wildly unpredictable E3 Spark Plugs NHRA Pro Mod Series also will compete during the weekend and the defending Bristol winner, Jose Gonzalez, is leading the points standings in that series. Other Pro Mod racers to watch during the weekend include Brandon Snider, Steve Jackson, Doug Winters and Rickie Smith. The race also will feature competition in several sportsman classes in the NHRA Lucas Oil Series.

As always, fans will have the opportunity to interact with their favorite drivers as they’re granted an exclusive pit pass to the powerful and sensory-filled motorsports attraction. This unique opportunity in motorsports allows fans to see firsthand the highly-skilled mechanics service their hot rods and get driver autographs.