History of the Bass Pro Shops NRA Night Race: Kyle Busch pulls off a pair of Triple Sweeps in the 2010s 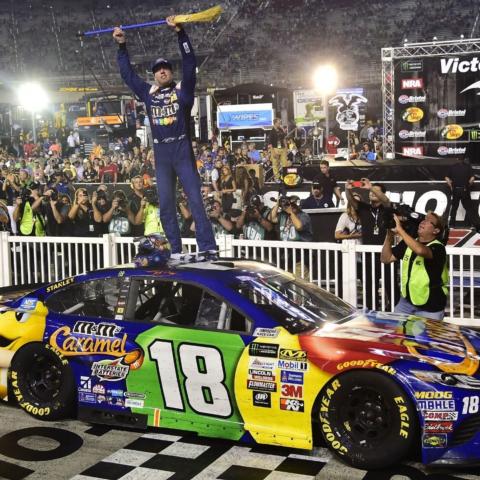 When there’s water cooler talk going on about Kyle Busch’s amazing Bristol Motor Speedway record and someone begins to tell the story about the incredible pair of triple sweeps he completed, one of the craziest things to consider is that if not for getting caught up in an untimely crash during the Xfinity race in 2009, that story could very well be about a driver who has accomplished that amazing feat three times instead of two.

Just to consider that Busch has won the NASCAR Gander RV & Outdoors Truck Series race, the NASCAR Xfinity Series race and the NASCAR Cup Series race in a single weekend at Bristol Motor Speedway on two separate occasions is an unbelievable achievement. For most drivers, it’s an insane quest to even try to do it.

In 2009, he almost did it again. He was leading the Xfinity race but got involved in a crash with Reed Sorenson and Chase Austin on lap 51 that pretty much took him out of contention. He won the Truck Series race the night before and then won the Cup race the following night. He was left to wonder what might have been.

Getting that close to a goal that he had always dreamed about gave him the momentum to finally get the job done in 2010. Then, just to prove that was no fluke, he went out and did it again in 2017.

“When you come so close and don’t get it, it’s pretty frustrating,” Busch told the media in 2010. “Last year we won the truck race and were leading the (Xfinity) race and we got crashed out, and then ended up winning the Cup race. So this is probably a year delayed. Coming to Bristol you could say, yeah, well, we’re supposed to run well here. But still, it’s cool to be able to put it all together in a complete weekend, with the truck, with the (Xfinity) car and then with the Cup car.”

Over the years Busch has compiled an incredible record at BMS, winning eight Cup races, nine Xfinity races and five truck races, for a grand track record total of 22 overall victories. His two unprecedented triple-sweeps at BMS remain the only times in NASCAR history where a single driver won all three major series races in a single weekend.

“To win all three races in a single weekend, you’re basically talking about 1,000 laps trouble free at Bristol in one weekend and to not have an issue, not have a problem and then to be able to come back and basically repeat that a few years later,” said noted motorsports historian and author David McGee. “I don’t know if anyone will ever attempt to complete that again. That’s an accomplishment that is going to stand forever. And he’s done it twice. And almost did it a third time in 2009.

“It’s maybe the greatest single weekend accomplishment in Bristol history,” McGee continued. “It’s incredible to me to think that you can run that many laps at Bristol and not have a problem.”

In 2010, Busch held off David Reutimann by .677 of a second for the Cup win. He led 283 laps including the final 72 en route to the checkered flag. In the Xfinity race he beat Jason Leffler by less than a second and led the final 32 laps of the race. In the Truck race he started on the pole, led the final 116 laps of the race, and took the checkered flag under caution in front of second place Aric Almirola.

In 2017, Busch held off rookie Erik Jones by 1.4-seconds to get the Night Race victory. The two drivers swapped the lead throughout the race but Busch moved in front of Jones for good on lap 445 and led the final 56 laps to take the victory. In the Xfinity race he beat Daniel Suarez to the checkerd flag by just over one second. He was the pole winner and led 186 laps of the race, including the last 81. He held off Matt Crafton for the Truck win by less than a second. He won the pole and led 109 laps of the race, including the final 37 to take the win.

Following the 2017 triple sweep at Bristol, Kyle Larson gave a shout-out of praise to Busch’s incredible effort with this tweet: “Love him or hate him, I feel he is the most talented driver I will ever witness in my lifetime.”

Legendary driver Darrell Waltrip, who owns the record for most Cup Series wins at Bristol with 12, says in his mind there’s no doubt, Busch’s two triples at Bristol are the greatest single accomplishments by a driver that he’s ever seen in the sport.

“I never in my life thought someone could win three races in a weekend there, but Kyle Busch has,” Waltrip has said. “I don’t know how he physically does it because all those laps in one weekend don’t appear to affect him all that much. Kyle stays up on the wheel and gets the job done. Just finishing three races there in one weekend is an accomplishment, but dominating, leading the most laps and winning is the most impressive thing I’ve ever seen a driver do there.”

Just like Kyle Busch’s incredible triple sweeps at Bristol, today’s crop of NASCAR Cup Series stars will be looking to create some wow moments of their own at Bristol Motor Speedway during round number three of the NASCAR Cup Playoffs on Saturday night, Sept. 19 during the 60th running of the Bass Pro Shops NRA Night Race.