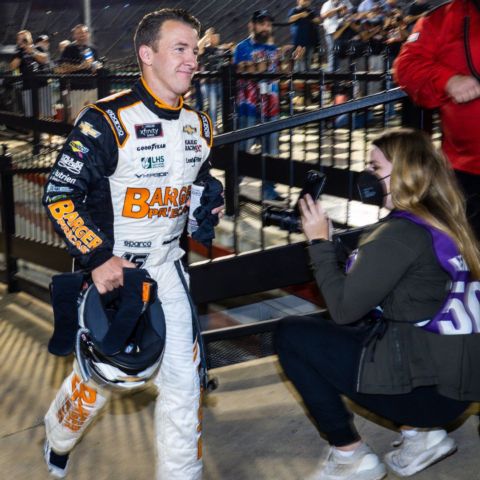 One of the wildest finishes in BMS history happened last September when A.J. Allmendinger (16) edged rival Austin Cindric (22) at the finish line in the Food City 300, the Xfinity Series regular season finale at Bristol Motor Speedway. 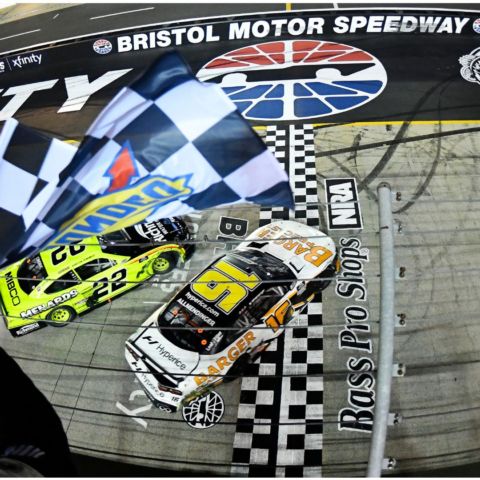 The 2021 Food City 300 featured one of the wildest finishes in BMS history. 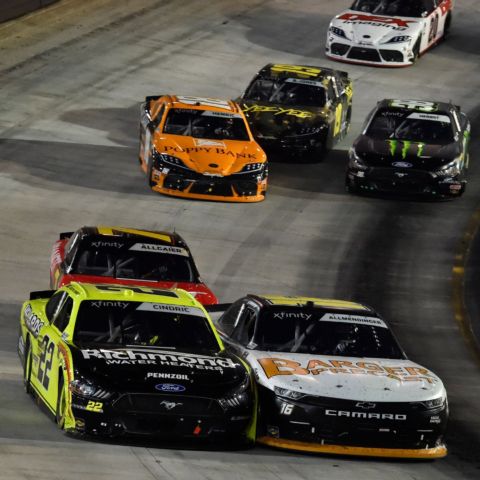 AJ Allmendinger (16) and Austin Cindric (22) battled door handle to door handle in the closing laps of the Food City 300 last season at BMS. 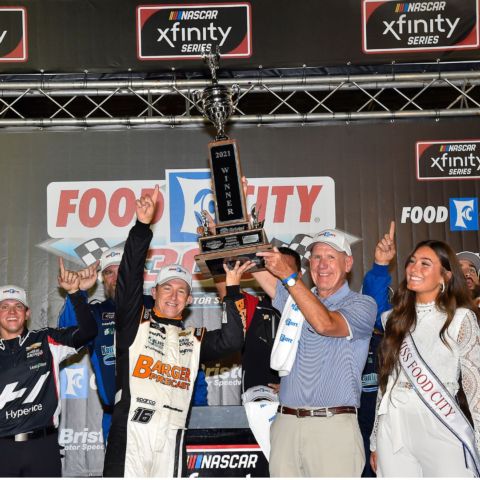 Food City CEO and President Steve Smith helps Food City 300 winner A.J. Allmendinger lift the trophy high in the air in a Victory Lane ceremony where the race winning car was too damaged to make it up on the BMS rooftop.

The 2021 Food City 300, the regular season finale for the NASCAR Xfinity Series, was a race to remember at Bristol Motor Speedway for a variety of reasons.

There have been plenty of wild finishes at Bristol Motor Speedway over the years. However, there’s only been one finish where the winning driver did his post-race interview from the care center and the winning race car was too damaged to make it to the track’s famed rooftop Victory Lane for post-race photos.

That’s exactly what happened in the late evening hours that Friday at Bristol. Yes, if you missed it, shame on you. Last year’s Food City 300 was an instant classic by every measure of the phrase.

With a regular season championship title riding on the line, the top two points earners – AJ Allmendinger and Austin Cindric – were battling with class veteran Justin Allgaier in a tight rumble toward the checkered flag with only a few laps remaining in the race.

In that scene, the lead changed several times and all bets were off as to exactly which one of them was going to earn the victory.

“I’ve been covering NASCAR for more than 20 years, and it was one of the best finishes I’ve seen in the Xfinity Series,” said Heather Williams, sports reporter for WCYB TV. “Nothing like a car needing to be towed to victory lane.”

Except Allmendinger’s black, orange and white No. 16 was so badly damaged in the aftermath of the crash, it wasn’t even able to be towed to Victory Lane. Allmendinger did his post-race winner’s interview from the Ballad Health Care Center, and after being checked and released, he walked to Victory Lane where he posed for photos with Food City, BMS and NASCAR officials without his car.

He said he was going for broke at the end, with the Xfinity Series regular season title on the line and the opportunity to claim a BMS Trophy and Gladiator Sword at The World’s Fastest Half-Mile, he wasn’t letting up.

“That was crazy at the end,” Allmendinger said. “We had about a fourth-place car. I slid into Austin trying to throttle up and stay on the bottom. I expected to get run into. It happened in the previous corner. It’s frustrating to get hit that hard coming to the checkers, but we’re battling for the win. It’s Bristol, baby. Whether you love me or hate me, this is what makes the sport bad ass.”

The race ended on a green-white-checker finish in overtime, and Allmendinger seemingly appeared out of nowhere to challenge for the victory.

“Last year’s Food City 300 was one of the most exciting races - and one of the most spectacular finishes – in Bristol history,” said David McGee, noted motorsports historian and author.

“What people may forget is that finish is the only time all night that A.J. led and it was in overtime,” McGee continued. “He was top-10 in both previous stages on a night when Justin Allgaier and Sam Mayer both led a lot, as did eventual season champion Daniel Hemric. But once Cindric got around Allgaier with less than 60 to go it looked like he would pull away to the title, but A.J. was just not to be denied on that final restart in overtime.”

With the victory, Allmendinger locked up his spot as the top seed for the Xfinity Series Playoffs. Just as significant, he checked off that important race car driver bucket list item of getting a win at The Last Great Colosseum.

“I haven’t had a lot of chances to get a win at Bristol, so you know what? When you have a chance to do it, you’ve got to go do it,” Allmendinger said. “If I don’t take that chance, I don’t belong in a race car, because my team deserves the win.”

It was such a wild night that runner-up Cindric heard from a vocal contingent in the grandstand after the race when he was interviewed by NBC pit reporter Marty Snider.

“He wanted to win really bad and I hate that it completely destroyed our Ford Mustang,” a visibly dejected Cindric told Snider in the heat of the moment. “I feel like maybe I shouldn’t have given up the bottom. It looked like the 7 (Allgaier) got loose there and then A.J. drove straight through us. Hey, a helluva race, and I tried.

“That’s why there's people in the grandstands, they want to see that battle,” Cindric continued. “As much as I hate it, it's about them, they love it. I just got booed and cheered tonight, I don't know what's going on.”

A recent panel of journalists, racing historians and Bristol experts ranked the race No. 2 on the top 10 list of wildest finishes in BMS history, behind the 1995 Night Race when Dale Earnhardt and Terry Labonte tangled for the first time on a final lap at Bristol. It received a lot of consideration to be ranked as the wildest finish.

“Move over Earnhardt-Labonte, there’s a new greatest finish in Bristol Motor Speedway history,” said Jeff Birchfield, veteran motorsports journalist for the Johnson City Press and Kingsport Times-News. “That was the lede I wrote for the next day's papers. While there may be other opinions where it ranks, no one can deny it was an all-time classic with A.J. Allmendinger and Austin Cindric pushing themselves and their cars to their absolute limits.”

Fans will want to make sure they are at BMS for the 2022 edition of America’s Night Race, Sept. 15-17, and cheer on more of NASCAR’s greatest drivers as they push their machines to the edge of high-performance potential. The weekend begins with Zane Smith, John Hunter Nemechek, Ben Rhodes and defending winner Chandler Smith battling for the NASCAR Camping World Truck Series victory Thursday night in the UNOH 200 presented by Ohio Logistics (Sept. 15, 9 p.m., FS1, MRN Radio). The rising stars in the ARCA Menards Series also will take on the challenging half-mile bullring in the Bush’s Beans 200 as part of the Thursday night doubleheader (Sept. 15, 6:30 p.m., FS1, MRN Radio).