As part of NASCAR’s revised 2020 schedule, the 60th running of the historic Food City 500 will be held on Sunday, May 31, at 3:30 p.m. at iconic Bristol Motor Speedway. In the wake of the COVID-19 pandemic, the race will take place on the famed all-concrete high-banks without spectators in attendance

Kevin Harvick wins at Darlington in NASCAR's return to racing 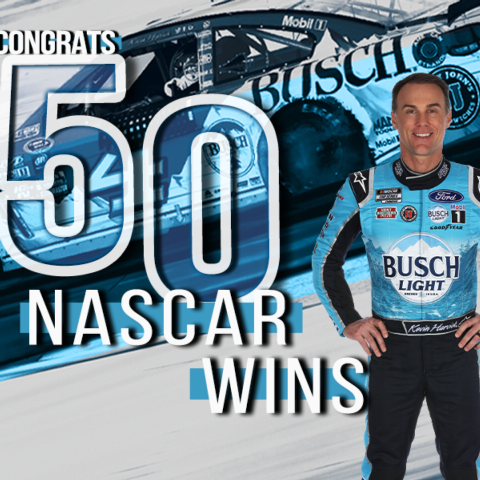 NASCAR's return to real-time action Sunday afternoon was a resumption of the close-quarter, high-action brand of racing that fans have long expected at historic Darlington Raceway, culminating with Kevin Harvick claiming his first trophy of the season in front of a robust television and radio audience eager to welcome sports back.

The Real Heroes 400 was the first on-track activity in nearly two months after NASCAR suspended competition because of the COVID-19 pandemic. The return to track included specific guidelines unique to this unprecedented situation - no fans in the grandstands, temperature checks at track, a limit on number of team members, and of course, social distancing.

The competitive drama, however, remained as intense as ever.

Harvick's 2.154-second victory over Alex Bowman was his first of the season and extends his points lead in the standings to 28 points over Bowman. His only previous win at Darlington came from pole position in 2014, the same year Harvick went on to win the series championship. Sunday's victory was the 50th win for the Stewart-Haas Racing veteran, tying him with NASCAR Hall of Famers Junior Johnson and Ned Jarrett on the NASCAR Cup Series all-time wins list.

Bowman, Kurt Busch, Chase Elliott and Denny Hamlin followed Harvick's No. 4 Stewart-Haas Racing Ford to the finish line. Martin Truex Jr., Tyler Reddick, Erik Jones, John Hunter Nemechek and Matt Kenseth rounded out the top 10. It was the best showing of the season - and first top-10 finish - for the rookies Reddick and Nemechek.

"The first thing I want to do is thank everybody from NASCAR, all the teams, the whole industry, for getting us back on the racetrack," Harvick said. "I think everybody in this garage is so excited to be here. I was up this morning at 6:00 a.m. pacing around my porch trying to decide when I was going to leave. I was excited to get back in the car. Today was just a well-executed day."

NASCAR Executive Vice President and Chief Racing Development Officer Steve O'Donnell said he was both proud and encouraged by the success of NASCAR's first race back on track - and hopeful it bodes well for a compressed schedule that will feature 20 more races between now and the third week of June at a variety of venues for all three of NASCAR's premier series - the NASCAR Cup Series, the Xfinity Series and the Gander RV & Outdoors Truck Series.

"As far as the vibe in the garage area, I think everyone's spirits were really, really high," O'Donnell said. "They all knew the effort that this took collectively to pull this off. This was not easy, but everybody came together in a real spirit of collaboration. It was odd just with limited number of people here and when you look up into the stands, you certainly miss the fans, that vibe, that energy.

"I think the participants were able to create their own positive vibe knowing this was a big day for the sport, knowing it was a day we could showcase the sport to a live television audience and hopefully give some people a little bit of joy to watch them race."

As good as the situation was at the track "behind the scenes," the drivers turned in a typically competitive day on-track with consistent drama - and depending on who you cheer for, some for the good and some not-so-much.

Seven-time NASCAR Cup Series champion Jimmie Johnson, for example, was leading and headed for the victory in the race's first stage when he collided with Chris Buescher a half-lap before crossing the finish line to claim the opening stage win.

"Gosh, what I would do to get that cornerback to do it over again," Johnson said. "Coming to the end of the stage, I was just trying to make sure I got a good run off of Turn 2. I felt like I was going to be able to exit the corner side-by-side with him, things just went horribly wrong there.

And he added later on his Twitter social media account, "Man, that hurts. What a bummer. But there's a race in a few days and we'll be back."

That was the case for two of NASCAR's most popular drivers who marked a return to competition on Sunday - Roush Fenway Racing's Ryan Newman and Chip Ganassi Racing's Matt Kenseth. Both made their way into the top 10 by the race's midpoint. Newman, who missed three races after being injured in the Daytona 500, earned points in the opening stage and finished 15th - after receiving a pit road speeding penalty. Kenseth, who made his first NASCAR Cup Series start since the 2018 Homestead-Miami season finale, finished 10th.

Both were racey and their competitive presence well-noted.

"Overall, great to be back in the race car, proud of how everybody worked, not just our team, but everyone in NASCAR to break the ice on getting the world back in motion," Newman said.

"Here's the thing about Matt Kenseth, he should have never quit," race winner Harvick said when asked about the veteran's return.

Harvick, who drew the first position on pit road, benefitted from the location and ultimately credited his work to a team that has helped him to top 10s in the last seven years at Darlington - nine of those top-five performances. After his win, Harvick stood in front of the empty grandstand and gave thanks to Dr. Josh Hughes, whose name appeared on Harvick's car as part of NASCAR's tribute to medical personnel who have so tirelessly worked during this pandemic.

"I'm just really honored and really thankful for all of our front-line workers, not only our doctors but grocery stores, truck drivers, fire fighters, police departments - you name it," Harvick said. "All of you front-line workers are the reason that we're here today and our country is actually still running."

Next up for the NASCAR Cup Series is Wednesday night's Toyota 500 at Darlington (7:30 p.m. ET on FS1, MRN and SiriusXM NASCAR Radio).