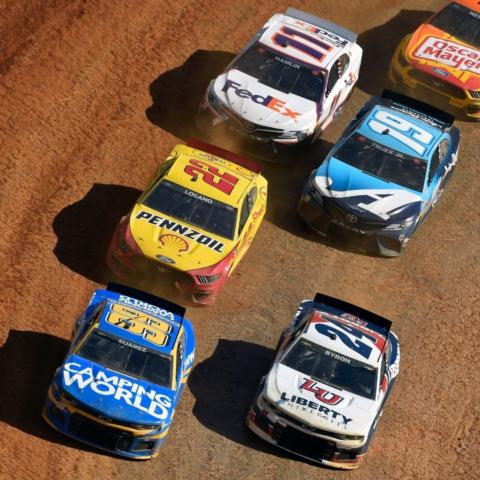 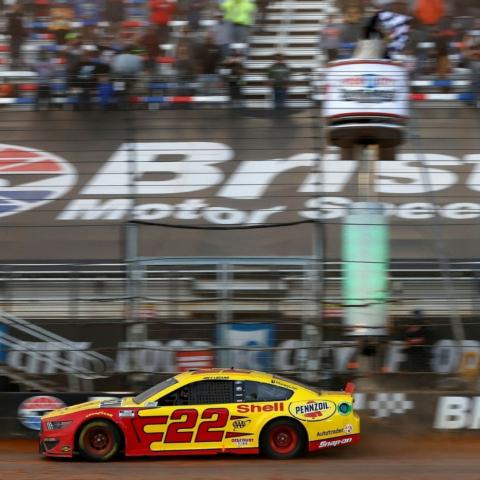 Joey Logano is the defending winner of the Food City Dirt Race at Bristol Motor Speedway, proving that you don't need to be a dirt specialist to win the popular race. 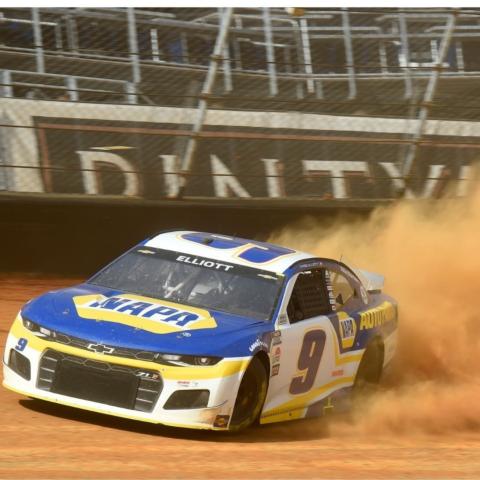 Chase Elliott (9) finished 10th in last year's Food City Dirt Race and he will be among the favorites to win Sunday night at Bristol Motor Speedway. 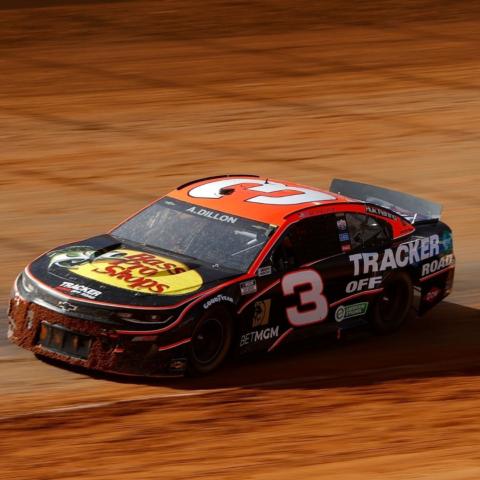 Austin Dillon, who won the first Truck Series race at Eldora and has won a Late Model race on dirt at Bristol, says he is going to go with a different strategy this time around at the Food City Dirt Race on Easter Sunday at Bristol Motor Speedway. 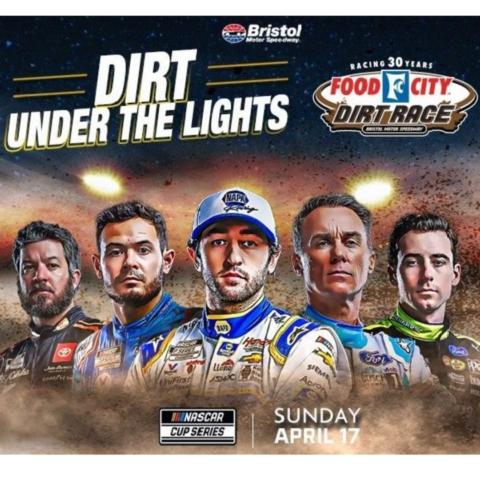 Joey Logano proved in last year’s historic Food City Dirt Race that to claim a victory on the challenging dirt-covered high banks at Bristol Motor Speedway, a driver doesn’t necessarily have to have an accomplished dirt racing background.

Logano led the final 61 laps of the race in his No. 22 Team Penske machine and crossed the finish line well ahead of several of the Cup Series’ legion of dirt racing specialists, like Kyle Larson, Christopher Bell, Tyler Reddick, Alex Bowman, Ricky Stenhouse Jr., Austin Dillon and Chase Briscoe, to name a few.

Logano, who grew up racing mainly on asphalt, only competed in a couple of Modified races in the 2021 Bristol Dirt Nationals to prepare for the first Cup race to be held on clay since the 1970 season. He had so much fun last year that he can’t wait to defend his hard-earned title this weekend when the green flag drops for the Food City Dirt Race on Easter Sunday evening (7 p.m., FOX, PRN, Sirius XM NASCAR Radio).

To help his preparation this year Logano also will drive the No. 54 truck for David Gilliland Racing in Saturday’s Pinty’s Truck Race on Dirt to get as much seat time as possible on the 19-degree, 50-foot wide BMS dirt bullring. The race’s three stages will feature 75-lappers in the first two and then a 100-lap finale.

“I’m excited,” Logano said. “I had fun last year. You just kind of have to go with it. There’s still a lot of unknowns. We might know a little bit more than we did last year, but you have a whole new car now and there are areas I still want to be better at. That’s why I’m running the Truck race, so I don’t know. We’ll just kind of get up there and go racing like we do every other week.”

Austin Dillon, one of a handful of Cup Series drivers who grew up racing on dirt and has an extensive background in the discipline, says as Logano proved last year, it doesn’t take an advanced degree in Dirt Track 101 to master the Bristol dirt.

“Having a dirt background gives you a little bit of an advantage when the track changes,” Dillon said. “But as you saw last year, a lot of the asphalt guys ran well. Joey doesn’t have a long background with dirt. His win showed that you need to get your car right just like any other weekend because these drivers are the best in the world.”

Chase Elliott, who pulled off a 10th place and has a limited amount of dirt experience, agrees that when the best drivers in the world are racing, it really boils down to which one figures it out the quickest.

“There are lot of just really good race car drivers that may or may not have come up through the dirt ranks,” Elliott said. “Joey’s a good driver and it’s no surprise that he won the race. He’s about as asphalt of a guy as it gets, but he was able to able to figure it out. That shows you it was a bit of its own animal and might not have catered to your typical dirt habits. It was really more of like a super abrasive track that was paved in 1950. You know, somewhere in Florida that sits in the sun all summer. That was what it reminded me of.”

Dillon, who won a truck race on dirt at Eldora in 2013 and also scored a Late Model victory at the Bristol Dirt Nationals last season, finished 21st last year and felt like maybe he tried just a little bit too hard and let the expectations get to him. He’s going with a different approach this year.

“I was probably a little overconfident going in, and I did my best to crew chief because I was the dirt guy,” Dillon said. “This time, we’re just going to run the setups that we use on regular short tracks. That will probably be just fine.”

Another dirt master, Bell, tangled with fellow dirt aficionado Larson in an early race crash that ultimately ended both of their chances last year. Bell hopes to steer clear of any chaos this year.

“Bristol dirt is a race that I am so excited for,” Bell said. “Last year was another one of those races that we were really strong or was definitely capable of winning the race. Unfortunately, I made a mistake, spun out and crashed early. So I don’t want to do that again. I want to make sure that I get to the end of the race and I think we’ll have a strong showing.

“I passed Joey Logano early in the race last year before I spun out,” Bell continued. “That’s good to have that confidence in my head. All the dirt racers, we got a lot of them in the Cup Series now. So it’s not going to be an easy race by any means.”

The parity in the Cup Series is at an all-time high currently, with seven different winners emerging in the first eight races of the season. The lone driver with two victories on the year is William Byron, who won the circuit’s most recent event in Martinsville and will be bringing some momentum into Thunder Valley. However, despite his sixth-place finish on the Bristol dirt last year, he says he’s still in student mode when it comes to racing on the tricky clay surface.

“I'll be honest, I have no idea what I'm doing, but I think iRacing has helped,” said Byron, who has also been racing a dirt Late Model in his spare time to help with his learning curve. “The iRacing (sim) dirt model is pretty good, the way the track changes. I feel like I've been trying to watch a lot of dirt races to kind of see how that all works. Luckily last year with Bristol dirt in the Cup car, it was pretty much like an asphalt track. It was just a slick asphalt track because it got rubbered in and you just had to baby the throttle. I think this year is going to be a little bit different, so hopefully running the dirt late model will help me a little bit.”

This year’s race on dirt has several wild cards, including moving the race to a night time start, a slight adjustment to the track’s banking, giving it a more progressive grade from bottom to top, and also the new Next Gen car. Most drivers seem to like the Next Gen and many have said they applaud BMS and NASCAR officials for moving the race to under the lights.

“Dirt racing was meant to be done at night,” Dillon said. “Every good dirt race that I’ve been a part of has been run at night. The track gets hard and rubbers up and this time of year in Bristol the moisture will have a chance to bleed back into the track and create some grip.”

Truck racer Stewart Friesen tested the Next Gen car at BMS last week and was pleased with its performance. That along with a new Goodyear tire, he feels, is going to make a huge difference in the racing action in Sunday’s nights Food City Dirt Race.

Logano says overall the Next Gen has been strong at the tracks they have visited so far and he expects more of the same on the Bristol dirt.

“I think the racing is better than what it’s been over the last couple of years, in my opinion,” Logano said. “I think cars have been able to move around the racetrack more. Things have been pretty good all things considered with the racing on the racetrack. A lot of what-ifs. There are a lot of teams making mistakes on pit road and drivers making mistakes in learning the car and understanding what they can and can’t do and just crashing them.  It’s pretty good I’d say right now.”

Bell expects the Next Gen to give the drivers a little more room to use their bumpers at Bristol, which should make for more thrilling racing and put the fans on the edge of their seats.

“One thing that we have learned about the Next Gen car is it seems to be really durable,” Bell said. “Hopefully, we’ll be able to have a little bit more contact and you know, get away with stuff that we weren’t able to do last year.”