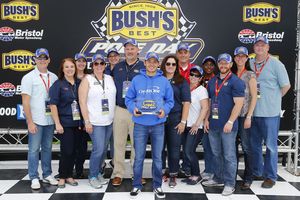 Chase Elliott will start on the front row alongside Larson, who owns one victory and four runner-up finishes through seven races in the No. 42 Chip Ganassi Racing Chevrolet this season.

"It's nice to be the point leader and to be starting up front here at Bristol," Larson said. "I always race really well here; I just don't ever qualify good. Being handed the pole like this will hopefully help us out."

In six career Cup Series starts at Bristol, Larson's best showing was a seventh place finish in the 2015 Night Race. The 24-year-old has three runner-ups and six top-five finishes in seven career XFINITY Series starts on the track.

Harvick won Bristol's Bass Pro Shops NRA Night Race last summer. It was the first race on the high-banked half-mile with a special additive applied to the bottom groove in the corners.

Seven-time and defending Cup Series champion Jimmie Johnson said Friday that drivers requested the resin be in place when they returned this spring.

"I commend Bristol for trying in that wish-land space to try to do something here at the bottom," said Johnson, who will start 11th. "Here it's worked. In the driver's council meeting after our fall race here, we were all eager to make sure it was back down and thought that it did offer more options than without it."

Larson did not sound so eager, but his sentiment surely is influenced by his dirt track background and the fact that he enjoys running the high line around the track.

"I think you'll see some of the veterans, the older guys that did get to run on the old Bristol probably excel if it does end up being around the bottom," he said. "But Bristol is Bristol. It's an aggressive track and I still feel like I should be OK once we get to racing."

Twenty-four of the 112 Cup Series races held at Bristol since 1961 have been won from the pole. Most recently it was accomplished last year by Carl Edwards, who will not be defending his title this weekend after deciding over the offseason to step away from the sport.

Kenseth's four victories are one shy of the Busch brothers - Kurt and Kyle. With five victories each in Cup cars at Bristol, they will be the winningest active drivers in Sunday's field.

Kurt Busch's last victory on the track came in this race in 2006.

"It's definitely gotten tougher with the amount of options there are with the low lane, the high lane, the way that the tires have changed," said Busch, who finished third in this race a year ago. "The races that I won had a nice, consistent pattern. It was to be a bulldog on the bottom lane, move guys out of the way, and let the rough edges drag.

"The new Bristol and where we are now it's a little bit more finesse and you have to find the lane that works the best to be able to get by the guy that's already in the best lane. You can't necessarily just move him because we're all on that ragged edge that close, that high lane, we're all up there running that 15-second lap time and you're right on the edge of slipping already, so you're trying to get to the guy and move him and yet if you do one little extra step, you're going to slide up into the fence. It's such a large consequence when that happens, so it's just a different way of going about it and I haven't quite mastered it like I did before."

Beyond his five Cup victories at Bristol, Kyle Busch also owns eight XFINITY Series victories and four more in the Camping World Truck Series. He likened himself to Larson, Elliott, Keselowski and Logano as drivers who return to the track with confidence that they can win.

"There's five guys probably, maybe even seven guys that walk in here this weekend thinking this is our weekend to get a win," said Kyle Busch, who mentioned Larson, Elliott, Keselowski and Logano by name. "So you've got to fight those guys in order to go out there and get that win for yourself."

After a morning delay, NASCAR officials rearranged the afternoon schedule, opting to give each of the three series competing this weekend a 55-minute practice session.

Erik Jones led the day's only Cup Series practice with a fast lap of 127.843 mph in the No. 77 Furniture Row Racing ride followed by Kyle Busch, Blaney, Truex and Kenseth. Larson drove more laps (72) than any other driver in the session and posted the seventh fastest lap.

Elliott spun about 30 minutes into the day's only Cup Series practice but did not damage his No. 24 Hendrick Motorsports Chevrolet.

With about 5 minutes remaining in the session, Logano brushed the wall and sustained minor damage on his No. 22 Team Penske machine.

Justin Allgaier led XFINITY Series practice with a lap of 124.420 mph followed by Jones and Larson.

Saturday's on-track schedule will be a busy one. Cup Series teams are scheduled to practice from 8:30-9:25 a.m. and from 11-11:55 a.m. XFINITY Series qualifying for the Fitzgerald Glider Kits 300 is set for 9:35 a.m. and the race is scheduled for a 1 p.m. start. The Zombie Auto 125 will follow the XFINITY race and is expected to start around 4 p.m.