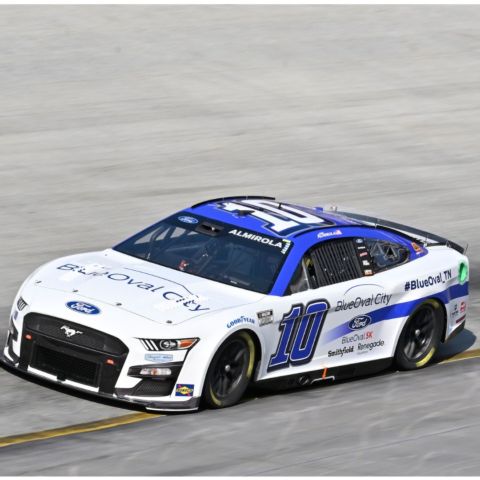 Chase Elliott told reporters today that the Bristol Night Race is one of the events that made him want to be a race car driver. 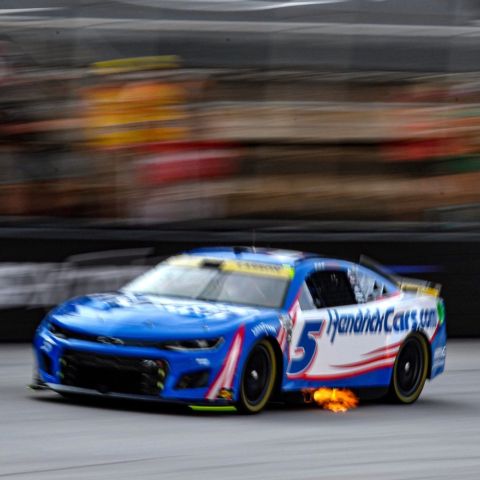 Hendrick Motorsports announced today that it extended Kyle Larson's contract through the 2026 season.

In the final round of time trials, Almirola covered the .533-mile distance in 14.946 seconds (128.382 mph) to become the first NASCAR Cup Series pole winner at Thunder Valley since Greg Biffle claimed the top starting spot in March of 2012.

“We had a really good (car) in practice,” Almirola said. “We ran, I think, 55 laps straight, and I felt really good about it. We swapped over to (qualifying trim), and it still had a lot of speed.

“I’m really proud of the effort on this team. We were bummed out we didn’t make the Playoffs, but we’re showing what we’re capable of. We can race with these guys. Yeah, we’re going to try and do it for 500 laps (Saturday) night.”

In fact, Ford drivers locked out the front row for the cutoff race for the Round of 16 in the Cup Playoffs, with Chase Briscoe running second to Almirola with a lap in 14.968 seconds (128.193 mph). Alex Bowman (128.176 mph) qualified third in the tightly bunched field, with Denny Hamlin (127.911 mph) taking the fourth starting position.

Playoff drivers will occupy positions two through nine on the grid. Brad Keselowski in the 10th position joined Almirola as the only other non-Playoff driver to qualify for the final round, as six Ford drivers made the final 10.

Kevin Harvick, who realistically is in a must-win position after suffering calamities in the first two Playoff races, will start seventh.

Among Playoff drivers who failed to qualify for the final round, Austin Dillon and Daniel Suarez have the most ground to make up. Dillon, three points below the cut line, qualified 28th, one position better than Suarez, who is six points ahead of Kyle Busch in 13th.

An eight-time winner at Bristol, Busch spun in practice and qualified 21st.

From his earliest memories, Bristol has held a special distinction for Chase Elliott

“Yeah, I think Bristol is the one that kind of has that asterisk next to it for me, just because the environment here is so cool,” Elliott said on Friday before Cup practice. “This fall race, at night, 500 laps—this was one of the events that, when I was a kid, it was larger than life.

“You couldn’t get a ticket for this thing for five years. It was just one of those events that everyone wanted to be at, and if you weren’t there or you weren’t talking about it in the early 2000’s, you weren’t living is how I thought it was.”

In fact, the Night Race helped shape Elliott’s decision to follow in the footsteps of his father, NASCAR Hall of Famer Bill Elliott.

“When I look back at this event and what I remember of it, this was one of the races that made me want to be a race car driver, honestly,” Elliott said.

“The environment here is unmatched, and this event is special. I don’t see another date or track on our schedule that can rival what this environment is on Saturday night in August or September.”

Ross Chastain says his No. 1 Trackhouse Chevrolet still has the speed to win

A quick glance at Ross Chastain’s results over the summer months might lead you to believe that the No. 1 Trackhouse Racing Chevrolet has fallen off in the performance department.

That would be a mistaken assumption, says Chastain, whose record over the last two months has been spotty at best.

“I feel like the pace has not left us,” Chastain said before Friday’s NASCAR Cup Series practice at Bristol Motor Speedway. “There’s been a lot of mistakes on my part, and then just stuff that’s going to happen in racing, just all kind of piled on for two months in a row there.

“But the pace never left. I never questioned that. It was just a matter of me not messing up; not speeding on pit road, debris in the drive pin holes at Darlington, or just crashing. It’s just eliminating that.”

In a breakout year for himself and for Trackhouse, Chastain won two of the first 10 events of the season and ruffled some feathers along the way. In the seven races after he ran eighth on July 17 at New Hampshire, Chastain posted an average finish of 25.0 and fell from second to eighth in the standings.

After running seventh last Sunday at Kansas, Chastain is 26 points to the good entering Saturday night’s Round of 16 cutoff race at Bristol.

With that margin, Chastain has mixed feelings about taking a conservative approach to the race.

“You never want to crash in practice, especially this year with this car,” Chastain said. “You don’t want to crash. I think that the simple answer is ‘Yes,’ (to a conservative mind-set), but I still want to go fast.

Reigning NASCAR Cup Series champion Kyle Larson will drive for Hendrick Motorsports through 2026 with HendrickCars.com as his sponsor, the team announced Friday.

Larson and HendrickCars.com have signed concurrent extensions to that effect.

“When Kyle joined our team, the expectations were sky high from both inside and outside the organization,” said team owner Rick Hendrick. “To say he’s exceeded them would be an understatement.

“Not only has Kyle proven himself as a champion driver, he’s performed at a championship level outside of the race car. We’re proud to continue our relationship and to see him represent our team and our brands in such positive ways. The years to come are very bright.”

Larson welcomed the chance to continue his relationship with an organization that has won more Cup championships (14) than any other.

"I can’t explain how much this opportunity means,” Larson said. “The chance to compete for the top team and best sponsors in racing is something every driver dreams about. I’m humbled to have incredible people in my corner and amazing support from so many fans.

“Thanks to everyone at Hendrick Motorsports and Hendrick Automotive Group for believing in me, (crew chief) Cliff (Daniels) and our team. Even though we’ve done some great things so far, I truly believe our best is ahead of us.”