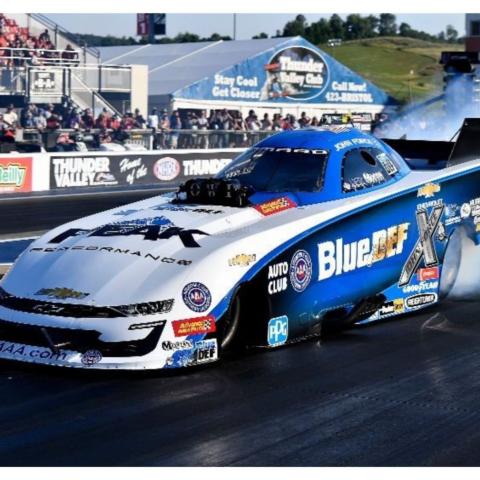 NHRA legend John Force will be looking for another NHRA Thunder Valley Nationals victory at Bristol Dragway in October.

The NHRA Thunder Valley Nationals has been added to the 2021 NHRA Camping World Drag Racing Series schedule on October 15-17, it was announced today by NHRA and Bristol Dragway officials. Celebrating its 20th anniversary in 2021, the NHRA race weekend at the legendary drag racing facility in Northeast Tennessee will become a critical playoff race in the NHRA Camping World Drag Racing Series Countdown to the Championship.

The schedule addition marks a return to Bristol Dragway for the NHRA Camping World Drag Racing Series, which has not competed there since June 2019 due to the COVID-19 pandemic.

“We can’t wait to hear the roar of nitro-powered engines rumbling once again at historic Bristol Dragway as we welcome fans back to an NHRA Camping World Drag Racing Series event and celebrate our 20th anniversary of NHRA racing at Thunder Valley,” said Jerry Caldwell, executive vice president and general manager, Bristol Dragway. “We anticipate a lot of championship drama in the top classes taking place during the NHRA Thunder Valley Nationals as one of the final three races on the 2021 schedule.”

“We couldn’t be happier to bring Bristol back on board for the 2021 season,” said Glen Cromwell, NHRA President. “The NHRA Thunder Valley Nationals is a staple on the NHRA circuit. The fall date will give us the opportunity to allow more loyal NHRA fans into the facility. To have the event as a Countdown race is an added bonus for both NHRA fans and competitors.”

The fire-breathing, 11,000-horsepower nitro machines of Top Fuel and Funny Car will once again headline the NHRA Thunder Valley Nationals. The 2019 winners, Mike Salinas (Top Fuel) and Bob Tasca III (Funny Car), are expected to attend and defend their titles. Three-time Bristol winner Doug Kalitta and defending Top Fuel world champion and the 2013 Bristol winner Steve Torrence will also be headliners to watch. In Funny Car, five-time Bristol winner Ron Capps will have a chance to become the winningest pro category driver at the facility. Four-time Funny Car winner and 2019 Bristol runner-up John Force will be determined to see if he can move into a tie with Capps on the Bristol Funny Car wins list.

With elapsed times reaching the 6.45-second range and speeds reaching 215 mph, the “factory hot rod” Pro Stock category is always a fan-favorite. Multi-time champs Greg Anderson and Erica Enders both have two wins at Thunder Valley and will look to add a third, which would put them one behind Mike Edwards on the all-time Bristol wins list for Pro Stock.

The Pro Stock Motorcycle category may have raced at Bristol twice before, but not for championship points. Matt Hines won Bristol exhibition events in the two-wheel class in 1999 (eight riders) and 2000 (16 riders), which means the 2021 NHRA Thunder Valley Nationals will see PSM competitors battling for the first time in an official points capacity at Bristol Dragway. The carbureted or electronic fuel injected, gasoline-burning bikes are capable of reaching speeds over 200 mph and covering the quarter-mile distance in 6.73 seconds or quicker.

Three-time world champion Angelle Sampey and fellow competitor Steve Johnson are the only two current bike competitors who have previously raced on two-wheels at Bristol Dragway. In addition to Sampey and Johnson, defending series champ Matt Smith, from nearby King, N.C., and current points leader Ryan Oehler will be among the riders to watch at Bristol.

The fan-favorite and unpredictable Pro Mod category also will be featured during the event, as well as the high-revving Mountain Motor Pro Stock class. Known for its large mix of vehicles and a wide range of engine tuning options, Pro Mod presents one of the most unique challenges as drivers face off with different combinations as they navigate the quarter-mile. The Mountain Motor Pro Stock class, which was conceptualized by Thunder Valley Legend Ted Jones at Bristol Dragway in the early 1980s, features sedans with monstrous 800 cubic-inch engines, carburetors and large hood scoops that produce roughly 2,000 horsepower.

The weekend race schedule will include one round of pro qualifying on Friday at 4:30 p.m., two pro qualifying sessions Saturday at noon and 3:30 p.m. and pro eliminations on Sunday starting at noon. Bristol Dragway officials will work with local health officials to determine the COVID-19 protocols and guidelines that will be required for the event as the date gets closer.

NHRA Thunder Valley Nationals tickets are available by clicking here or by calling the Bristol Motor Speedway ticket office at 866-415-4158. Fans who purchased tickets to last year’s cancelled race will be able to apply that purchase toward 2021 tickets.