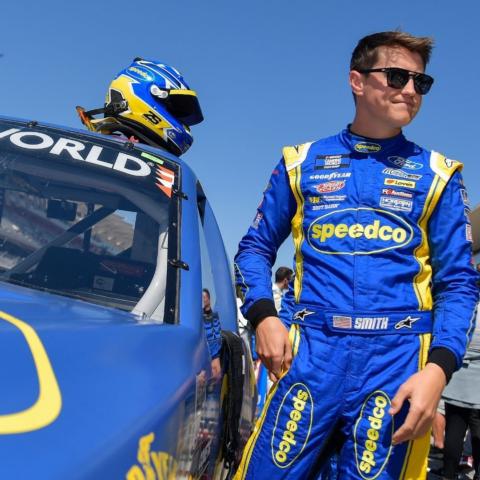 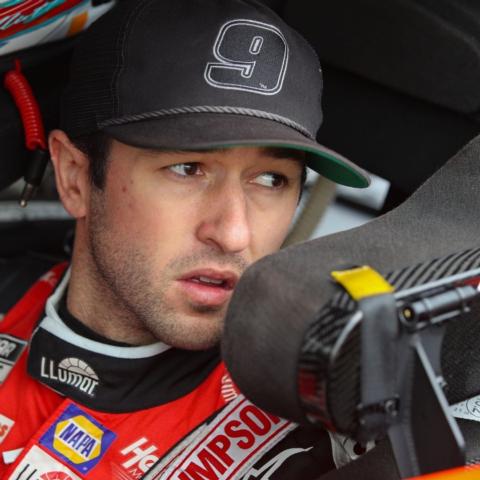 Chase Elliott is one of four Cup Series regulars entered in the Pinty's Truck Race on Dirt Saturday night at Bristol Motor Speedway. Elliott is driving the No. 7 Chevy for Spire Motorsports. He will be joined by fellow Cup racers Joey Logano, Austin Dillon and rookie Harrison Burton in the 150-lap event. 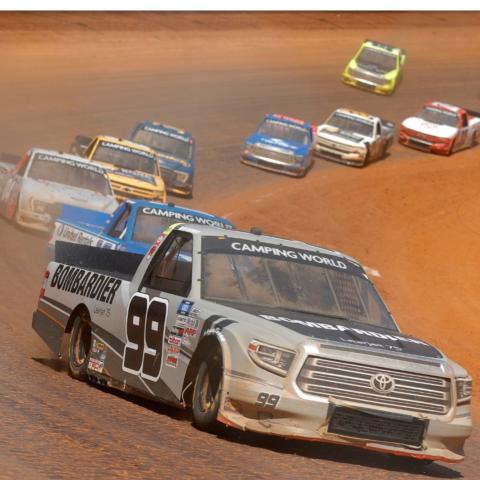 Defending Camping World Truck Series champ Ben Rhodes (99) finished second in the Pinty's Truck Race on Dirt last season and is looking to improve that spot by one this year at Bristol Motor Speedway. 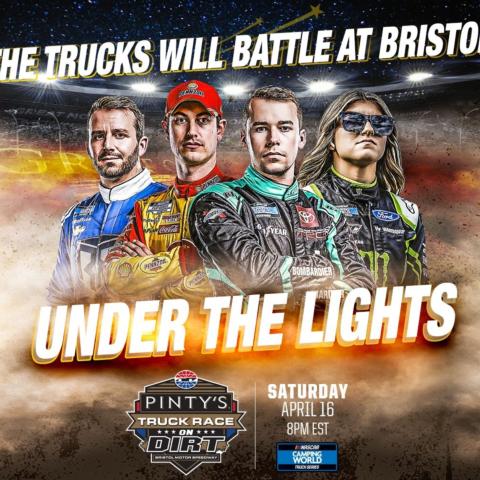 There was a point last year when Zane Smith wasn’t sure where he would be racing in 2022 in the NASCAR Camping World Truck Series. After joining forces with Front Row Motorsports, that question has clearly been answered, and it’s at the front of the pack.

Smith has rocketed out to an amazing start this season at the controls of the No. 38 truck for East Tennessee-based team owner Bob Jenkins. With two victories he is at the top of the points standings, contending for victories and having a blast. He is one of the contenders to win Saturday night’s Pinty’s Truck Race on Dirt at the dirt-transformed Bristol Motor Speedway (8 p.m., FS1, MRN Radio/Sirius XM NASCAR Radio).

Smith, who took over the ride after Todd Gilliland graduated to the Cup Series, says he feels right at home with his new team. They’ve scored victories at Daytona and COTA, posted a top five in Atlanta and won Las Vegas but were ultimately disqualified following post-race inspection due to a lug-nut violation. They finished ninth this past weekend in Martinsville.

“[We’re] making sure we were going to hit the ground running as fast as we could, and we’ve hit the ground sprinting,” Smith told NASCAR.com recently. “I feel like that’s a product of starting [off the year] good at Daytona. Everyone wants to just be rolling at the end of Daytona and it’s like your year is good. When you win Daytona, the rest don’t come easy by no means, but winning is as contagious as losing is. I feel like the communication and confidence in the team, it’s a lot more fun.”

Now the team faces one of its toughest tests of the regular season with the challenging half-mile clay-covered high-banked bullring. The dirt-covered track features 19 degrees of banking at its highest point and a 50-foot wide racing surface. The race will be split into three stages, with a 40-lap first, 50-lap second and a 60-lap final stage. Earlier on Saturday afternoon there will be four 15-lap heat races in Bush’s Beans Qualifying to set the starting lineup. The heat races will be filled by random draw.

Last year Smith finished seventh in the 150-lap race that Cup Series regular Martin Truex Jr. rallied to win. Smith is looking for a better result this year with the move to scheduling the race under the lights.

“I know Bristol dirt last year in the very beginning was some of the most fun I’ve ever had in a truck and then at the very end I didn’t have quite that much fun, just from the seeing concept of things,” Smith said, “but I’ve heard they’re trying to work out those bugs and make it a good show for us. I feel like we’re all kind of in the same boat there and I love that.”

This year that boat is also going to include four talented Cup Series regulars and a USAC champion. Cup stars Chase Elliott, Austin Dillon, Joey Logano and Harrison Burton will pull double-duty during the weekend, while USAC champ Buddy Kofoid also will join the fray.

Logano won the Food City Dirt Race in the Cup Series last year and is looking to get as much seat time on the track as possible in an effort to defend his dirt title. Burton, who has ran in the Truck Series on dirt at Eldora in the past, also wants to get some extra lap time on the red Tennessee clay. Dillon won the first dirt Truck race at Eldora back in 2013 and has also won a dirt late model race at BMS last spring.

Meanwhile, Elliott, the 2020 Cup Series champion, who finished 10th in the Food City Dirt Race last year is looking forward to competing in the Pinty’s Truck Race on Dirt. The truck is the same one Elliott’s teammate William Byron drove to victory last weekend at Martinsville.

“Driving the No. 7 Chevy Silverado at Bristol this weekend is definitely something I’m looking forward to,” Elliott said. “These trucks always look like a lot of fun to race on dirt, and this team has had some great runs this year and put together a solid program in a short amount of time. I’m excited to see what we can do out there on Saturday night.”

California-native Kofoid, who many have called a dirt racing wunderkind, is excited to make his NASCAR debut in the truck that won the race last year.

“Getting the opportunity to race the best equipment in the NASCAR Camping World Truck Series is a huge step in my career and I can’t thank Kyle Busch Motorsports, Mobil 1 and Toyota enough for giving me this chance,” Kofoid said. “To be making my Truck Series debut in such a unique event at an iconic venue like Bristol Motor Speedway is going to be really cool.”

Others to watch in the race include defending series champ Ben Rhodes, who finished second in the Bristol dirt last year, Bristol UNOH 200 winner Chandler Smith, the dirt racing couple of Stewart and Jessica Friesen, dirt aficionado Matt Crafton, former Cup regular Matt DiBenedetto, who drives the No. 25 for Rackley/WAR Racing, local standout Parker Kligerman, who drives the No. 75 truck for Abingdon, Va.-based Henderson Motorsports and fan-favorite Hailie Deegan, who pilots the No. 1 truck and cut her teeth racing on dirt tracks in Southern California.

The Food City Dirt Race weekend starts on Good Friday with Bush’s Beans Practice Day that will have both two 50-minute practice sessions for both Cup and Truck teams during the afternoon.

On Saturday, Bush’s Beans Qualifying will be held for both Cup and Truck competitors with each series participating in four blind-draw 15-lap qualifying heat races to set the fields for the main races. The Pinty’s Truck Race on Dirt will follow with an 8 p.m. start (FS1, MRN Radio and Sirius XM NASCAR Radio).

Fans will want to take advantage of so many fun activities taking place during the weekend. The BMS Fan Zone has plenty of action going on, highlighted by driver appearances, music, games and prizes at the Food City Fan Zone Stage. On Saturday night, country music artist Tim Dugger will perform during the post-race concert at the Food City Fan Zone Stage. On Sunday at 4 p.m., BMS will host a very special Easter Celebration in the Fan Midway, which will be headlined by Chris Tomlin, Max Lucado and former Rascal Flatts lead singer Gary LeVox.