History of the Bass Pro Shops NRA Night Race: Jack Smith had help from a friend in winning the first ever Cup Series race at BMS 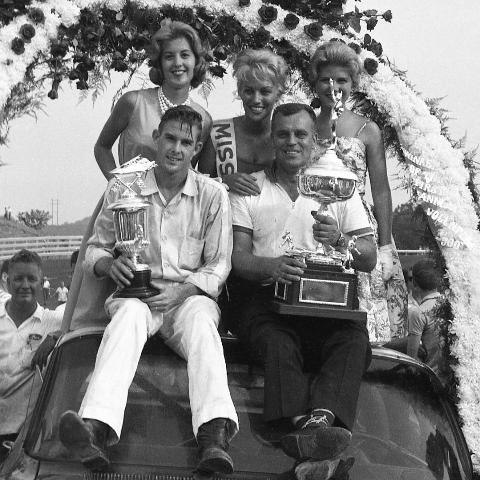 Bristol Motor Speedway officials knew they had something very special in the tough half-mile short track during the facility’s very first race. Back in July 1961 during the inaugural running of the Volunteer 500 – the early ancestor to the modern day Bass Pro Shops NRA Night Race – conditions were so tough that it took two drivers to bring home the winning car on that sultry summer afternoon in Northeast Tennessee.

While the record books will always show Atlanta’s Jack Smith as Bristol’s first NASCAR Cup Series winner, the nitty gritty details of history will tell a different tale. Smith took the green flag and drove the first 292 laps of the race, but then called on a longtime friend to take over in the cockpit of his No. 46 Pontiac Catalina and finish the race.

Smith, who took the lead on lap 268, had to come into the pits mid-race to get his right foot checked by medical personnel. He needed a relief driver, and fast.

“Heat was coming up through the accelerator hole on the car and my foot felt like it was on fire,” Smith said after the race. “I had to get out of that car.”

As fate would have it, his friend, fellow driver Johnny Allen, of Greenville, S.C., had already exited the race due to his car overheating. Well, actually, the Chevy he was driving that day caught on fire after a freak accident in the pits. He had to park the car after completing only 106 laps. As he was watching the race unfold in the pits, one of Smith’s crew members came over and asked if he would be able to help them out.

In a matter of seconds the driver swap was made and Allen pulled back on the track at the controls of Smith’s car on lap 292 and managed to maintain the lead.

“I’d always wanted to see what a Pontiac could do,” Allen told a news reporter after the race. “I had driven some for Jack before and done some work for him, so he trusted me.”

Once the medical team determined that Smith had a few blisters on his foot, he was cleared to return, but Smith decided to let Allen go ahead and finish the race.

“Sometimes in those days when a driver needed a relief driver early in the race and they had a good car, they would get back in the car late to finish the race, but Jack elected to leave me in and share the glory,” Allen told Mike Hembree of Speed.com in 2011. “It was a memorable day.”

Together, the Smith and Allen duo led 243 laps of the race en route to victory and they split the $3,225 winner’s prize.

“They paid off at the track after the race in those days, and Jack said, 'Let's go pick up our money.'” Allen told Hembree. “I don't remember how much it was, but I really needed the money at the time. I appreciated the opportunity.”

Interestingly, the Smith-Allen finish is the first of six winning relief driver finishes in the NASCAR Cup Series at Bristol Motor Speedway over the years. In 1965, Fred Lorenzen assisted in Junior Johnson’s winning effort; Richard Petty drove for David Pearson in his 1969 win; Dave Marcis helped Bobby Allison in his 1970 win; Friday Hassler subbed for Charlie Glotzbach in 1971; and in 1973 John A. Utsman helped Benny Parsons to his victory.

Both Smith and Allen posed with race officials and trophy queens in Victory Lane following the event, both holding trophies, and the unorthodox finish remains one of Bristol Motor Speedway’s most compelling moments.

NASCAR Cup Series stars will be looking to create some wow moments of their own as The World’s Fastest Half-Mile hosts round number three in the NASCAR Cup Playoffs on Saturday night, Sept. 19 during the 60th running of the Bass Pro Shops NRA Night Race.

NASCAR’s best drivers will beat and bang on each other – NASCAR Playoff style – and only the strongest will survive 500 laps of mayhem and chaos inside the high-banked, all concrete bullring. In the Cup race, which will take the green flag at 7:30 p.m., you’ll get to see all of your favorite drivers doing what they do best, including defending Cup Series champ Kyle Busch, defending Night Race winner Denny Hamlin, Food City Supermarket Heroes 500 winner Brad Keselowski, All-Star Race winner Chase Elliott, Ryan Blaney, two-time BMS winner Kevin Harvick, Martin Truex Jr., Austin Dillon and Bubba Wallace, among others.

On Thursday night, Sept. 17, the NASCAR Gander RV & Outdoors Truck Series will open its eight-race Playoff series during the UNOH 200 presented by Ohio Logistics at 7:30 p.m. The 10 driver Playoff field – which will likely include top series drivers such as Matt Crafton, Ben Rhodes, Grant Enfinger, Brett Moffit and Austin Hill – will be reduced from 10 to 8 drivers once the checkered flag falls.

Many of short track racing’s rising stars, like Hailie Deegan, Ty Gibbs and Drew Dollar, will hit the track on Thursday night after the Truck Series race for the Bush’s Beans 200 in the ARCA Menards Series. Race officials announced yesterday that that this race, which is scheduled as the 9:30 p.m. nightcap on Thursday, will be increased by 50 laps to a 107-mile distance.