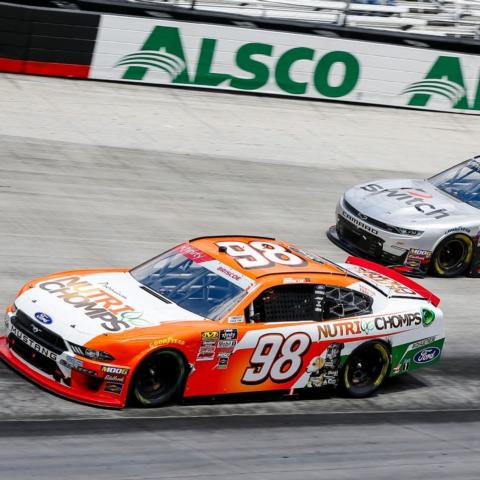 Chase Briscoe felt like he had his arrival moment on NASCAR's big stage recently after earning his most impressive NASCAR Xfinity Series victory to date by holding off one of the best drivers in the stock car racing business.

The second-year driver for Stewart-Haas Racing was able to go door-handle to door-handle with Cup Series veteran Kyle Busch down the stretch at the always-tough Darlington Raceway and after the dust settled Briscoe was proudly holding the trophy in Victory Lane. It was his fourth career Xfinity Series victory, but one that he will cherish forever.

On Monday night under the lights, he'll try to conquer another of NASCAR's legendary tracks, iconic Bristol Motor Speedway, when the Xfinity Series visits the super-fast all-concrete high banks for the Cheddar's 300 presented by Alsco. The green flag is scheduled to drop at 7 p.m. with live coverage on FS1 and PRN.

That's a track where Kyle Busch holds the record for most Xfinity Series victories and has 22 total wins there among all three of NASCAR's major touring series. His victory over Busch certainly gives Briscoe a lot of mojo heading into the tough East Tennessee bullring as he looks forward to having more success in the Xfinity Series.

"Beating Kyle Busch in any type of a race is a big deal," said Briscoe, who won't have to worry about Busch on the track at Bristol this time around because the nine-time Bristol Xfinity winner will be working in the TV booth as a race analyst.

"You know it's not going to be easy," Briscoe continued. "He's going to make you work for it and it takes everything you've got. When you see him in your mirror, you know what's coming. Hopefully, that win will be a stepping-stone moment in my career."

Briscoe is ready to get his team back on the winning track after finishing 20th at Charlotte Motor Speedway during a race on Memorial Day. He started eighth and worked his way up to third by the end of the second stage and was running strong before making contact with the outside wall with 47 laps to go that ultimately stalled his momentum.

"I thought we were a top-three car, for sure, and probably could've battled for the win," Briscoe said. "It's tough to have a race-winning car and run 20th, but it could've been worse. We were able to rally and end up with a top-20 finish. It's a shame we didn't run better, but I'm ready to go to Bristol where we should be really good."

Briscoe had a shot at the checkered flag in his most recent outing at The World's Fastest Half-Mile, ultimately finishing second to winner Tyler Reddick after giving it a valiant effort last August during the Food City 300.

"That last restart I just didn't fire off good. Those last five laps, it finally started coming to me and I was definitely running him down and just ran out of laps," Briscoe said. "That one stings. You don't get very many opportunities to win at a place like Bristol and I just really want to win here bad and at that point it felt like we had a Mustang to do it, but just didn't get it done."

For Monday night's race Briscoe heads to Bristol in the points lead, in front of some really tough competition. As an added incentive at the Cheddar's 300 presented by Alsco, drivers will be trying to finish in the top four to qualify for the lucrative Xfinity Dash 4 Cash program. The top four Bristol Xfinity finishers will be eligible to compete for a $100,000 bonus at the following race in Atlanta. Homestead-Miami, Talladega and the next announced Xfinity stop will complete the popular four-race bonus program.

In addition to Briscoe, some of the other top contenders in the series include Team Penske's Austin Cindric, who finished third at Charlotte, and is second in points, veteran driver Ross Chastain, second generation star Harrison Burton and the Daytona season-opening race winner Noah Gragson. Series veteran Justin Allgaier, Brandon Jones, Justin Haley and Daniel Hemric are also among the drivers to watch.

With so much competition, Briscoe is excited about the challenge and says if a similar situation develops like last year where eventual series champ Reddick, Christopher Bell and Cole Custer had epic battles all season and were tagged by the media as the "Big 3," he would welcome such a weekly rivalry.

"I think you're going to have two, three or four guys separate themselves from the rest of the field and, hopefully, we're one of those guys," Briscoe said. "If the 'Big Three' is a thing, we aim to be a part of it. I feel like last year we were close to being in that conversation. If you look at just the last half of the season, we didn't necessarily have the wins, but we were competing week in and week out. And just in the Playoffs alone, I felt like we could've won four or five races, but weird stuff would happen. I definitely expect to be a part of that conversation if there is a 'Big Three' and you do that by winning a lot of races."