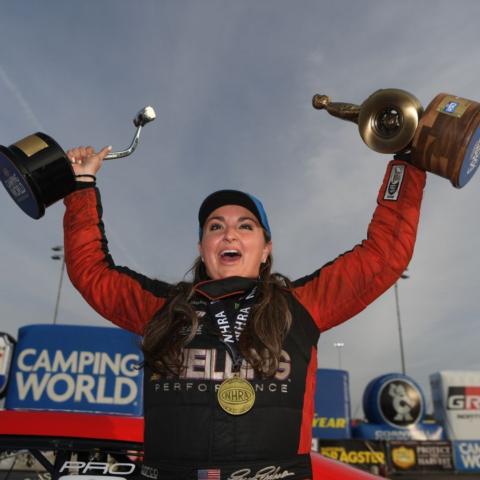 Erica Enders has won four races this season and will be one of the favorites to win this weekend at Bristol Dragway. 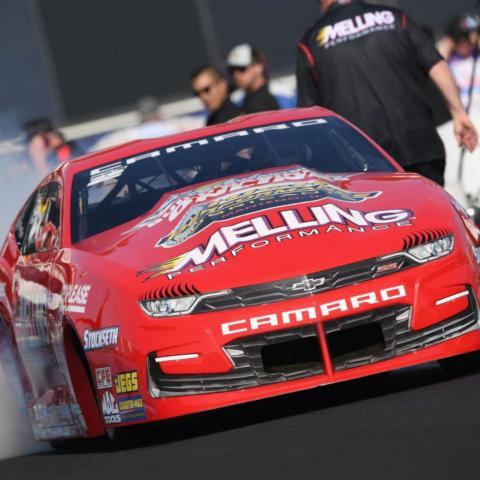 Erica Enders is a two-time Bristol Dragway winner in the NHRA Thunder Valley Nationals and she enters the event this season on a hot streak.

Erica Enders is in the zone right now in NHRA Pro Stock competition and she will lead the class’ return to historic Bristol Dragway this weekend for the first time since 2018.

Enders, a four-time winner this season in her Elite Motorsports Chevy Camaro, has been tough to beat in the early stages of the NHRA Camping World Drag Racing Series season, and she is the clear favorite in the factory hot rod division for this weekend’s NHRA Thunder Valley Nationals, June 17-19.

She has opened the year with wins at Pomona, California; Las Vegas, her hometown race in Houston and also last weekend’s race in New England. She’s a two-time winner at Bristol Dragway and despite an influx of new talent in the Pro Stock category, Enders is proving that experience is better than youth and exuberance so far this year.

Now she is setting her focus on keeping her streak going at Bristol Dragway, where the Pro Stock cars haven’t competed since 2018. She claimed her victories at the Tennessee quarter-mile in back-to-back seasons in 2014 and 2015. She’s ready to get another victory in front of her Bristol fans.

“There’s just something about the East Coast that breeds love for Pro Stock, and it’s nice to see how receptive fans are to the drivers,” Enders said. “You get that friendly atmosphere in Tennessee.

“Bristol is an area of the world that is conditioned to love racing,” Enders continued. “You have the roots of stock car racing and dirt track racing in the area, along with the amount of drag strips. The fan base is built and ready-made, and this weekend’s races are kind of a true come back to Thunder Valley.”

In order to win this weekend, Enders will need to defeat her longtime rival Greg Anderson, the category’s defending world champion. But there is a host of new blood in the division who are cutting their teeth and getting better with every race. Enders knows it’s only a matter of time before the competition goes off the charts.

“The level of competition in Pro Stock right now is absolutely immense,” said Enders, a pioneering racer in the Pro Stock class who has won four world championship titles and became the first female to win a race and a championship in the category.

“I’ve been driving for 18 years,” she continued. “And while competition has always been stout in the factory hot rod class, it is just different this year with (Greg) Anderson and myself being the veterans of the class and, you know, followed by a whole bunch of young guns.

“The impact of young blood is awesome on one hand, and on the other hand, they can definitely hand you a loss. So, it keeps me up on the wheel. It keeps me hungry, it keeps me competitive, and it keeps me wanting to win.”

Others to watch in Pro Stock include former world champ Bo Butner, who will pull double-duty this weekend by also competing in the Super Gas sportsman class. Some of the young guns in the class include New York’s Camrie Caruso, a third-generation racer who battled Enders for the win in a historic all-female final in Houston; last year’s top rookie Dallas Glenn, second generation racers Kyle Koretsky and Aaron Stanfield, veteran Chris McGaha, Troy Coughlin Jr., Matt Hartford and Deric Kramer.

In addition to Pro Stock’s return, the 200-mph Pro Stock Motorcycle class is also back this season and defending race winner Angelle Sampey will be looking to add a second Bristol trophy to her collection. Defending series champ Matt Smith, from King, N.C., Suzuki rider Steve Johnson, national record holder Karen Stoffer and Team Harley’s Eddie Krawiec will be among the two-wheelers looking to score a Thunder Valley victory.