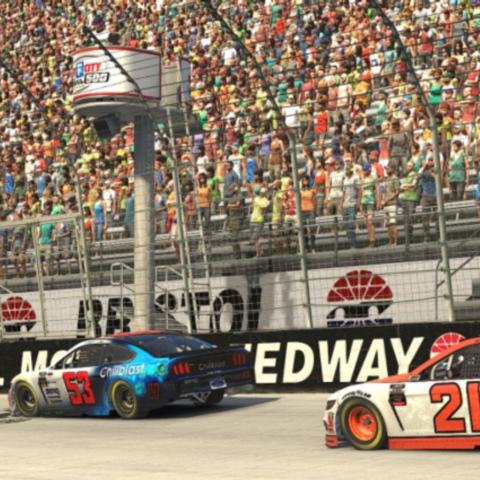 Virtual Bristol Motor Speedway, in both its dirt and concrete configurations, will serve as host for two of the 19 races in the 2022 eNASCAR Coca-Cola iRacing Series it was announced today by league officials.

Virtual Bristol Motor Speedway, in both its dirt and concrete configurations, will serve as host of two rounds of the 19-event 2022 eNASCAR Coca-Cola iRacing Series it was announced today by league officials.

The Bristol Dirt Race will be held on April 12 on the virtual half-mile dirt setup and the virtual version of the Last Great Colosseum in its traditional concrete layout will host the opening round of the eNASCAR Coca-Cola iRacing Series Playoffs on Sept. 13.

“The 2022 eNASCAR Coca-Cola iRacing Series season is shaping up to be one of our most exciting yet,” said Tony Gardner, iRacing President. “With a refreshed schedule, led by our opening exhibition at the L.A. Coliseum, a track developed in iRacing, the pursuit of this year’s championship will take some exciting new turns this year. We’re excited to kick off the chase for one of the largest purses in sim racing, with well over $300,000 on the line, and look forward to crowning a champion in Phoenix!”

BMS is the only virtual venue the series will visit twice and the BMS Dirt Race is one of six new tracks for the series. The five other new tracks are the L.A. Coliseum, reconfigured Atlanta Motor Speedway, Dover Motor Speedway, World Wide Technology Raceway and Nashville Superspeedway.

The Series will return to many other traditional stops on the virutal circuit, including Daytona, Las Vegas, Richmond, Kansas, Charlotte, Road America, Pocono, Watkins Glen, Darlington, Talladega, Homestead-Miami and Phoenix. For the first time in its history, the series will open on Feb. 6 at virtual L.A. Coliseum and conclude at Phoenix Raceway on October 25.

The past two virtual BMS winners in the eNASCAR Coca-Cola iRacing Series were Ryan Luza in 2020 and eventual series champ Keegan Leahy in 2021.

All races will be broadcast live on eNASCAR.com and //iRacing.com/live, as well as the NASCAR and iRacing Facebook and YouTube channels. Race streams will kick off at 9 p.m. ET/6 p.m. PT.