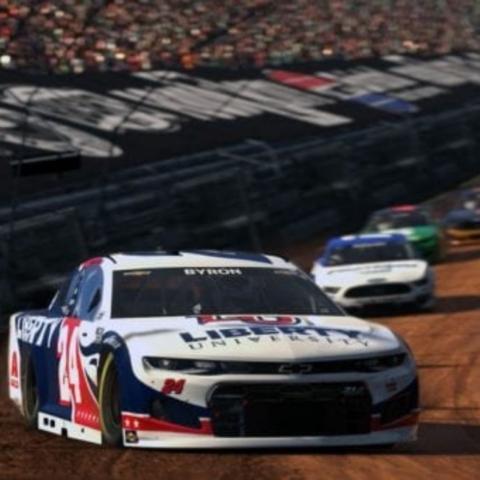 William Byron kicked off the second season of the eNASCAR iRacing Pro Invitational Series Tuesday night in the way he does best: taking the checkered flag against 20 of his fellow NASCAR Cup Series drivers on iRacing. The never-before-raced dirt-covered Bristol Motor Speedway hosted the virtual race just four days before the NASCAR Cup Series’ Bristol Dirt Race, the first race on dirt for NASCAR’s top stars in more than 50 years.

Joey Logano — pulling double-duty in the FS1 broadcast booth — set the fastest single-car qualifying lap, putting his Team Penske Ford in the first starting spot in the first of three heat races that would determine the starts for the 21-car feature event.

Christopher Bell led much of the first qualifying heat but was bested by James Davison in the closing laps, earning Davison the win — and the first-place starting position for the 70-lap main event. Chase Elliott, Ryan Blaney and Kurt Busch were among those who didn’t make the top seven to advance.

In the final heat, Ryan Preece and Garrett Smithley fought tooth and nail for the win, but Preece managed to hold off Smithley in the end, spelling the end of the road for Austin Dillon, Daniel Suarez and others.

The 70-lap feature, consisting of the top-seven finishers from each heat, rolled off shortly after — with not much more than bragging rights on the line — led by Davison.

The feature’s caution first flew on Lap 10 when Alex Bowman, a former Pro Invitational Series winner, tangled with Corey LaJoie. Luckily for the pair, drivers were afforded two damage repairs — something they’d no doubt wish were available in their real NASCAR Cup Series race cars — allowing the two to continue after a quick trip to the pits.

Chris Buescher took the top spot from Davison on the ensuing restart, who led a brief stint, but it wasn’t long before Byron made his way to the front just before halfway.

LaJoie’s luck ran out again shortly after, going for a spin off the bumper of Joey Gase’s car. The incident set up for a dash to the finish with Byron’s Hendrick Motorsports Chevrolet still out in front.

With the laps winding down, dirt-racing savant Bell moved to second place past Tyler Reddick. Reddick battled back, crossing over Bell’s Toyota, while Smithley waited in the wings, hoping to pounce in the event of pixel-on-pixel contact.

Byron held on to score the victory, his fourth of the iRacing Pro Invitational Series. While the race was held just for fun (and fun it was!), iRacing pledged to donate $5,000 to the winner’s charity of choice — Big Brothers Big Sisters, in the case of “Willy B.”

Reddick held on to finish second ahead of Bell, while Rick Ware Racing teammates Smithley and Davison rounded out the top five. Bowman, Kyle Larson, Timmy Hill, Ross Chastain and Gase rounded out the top 10. Hill, who was originally not scheduled to start the event, took over Brad Keselowski’s No. 2 Team Penske Ford for the evening.

The iRacing Pro Invitational Series was created last year after the start of the COVID-19 outbreak as NASCAR looked for alternative forms of racing, until finally returning to the track on May 17 at Darlington Raceway. The series returned for 2021, featuring a 10-race schedule with races that will air on FOX Sports and NBC Sports.

Find out Sunday if the iRacing Pro Invitational Series race proved sufficient practice for Byron and 38 other drivers making up the rest of the field, which takes to the real Bristol track Sunday for the Food City Dirt Race (3:30 p.m. ET, FOX).