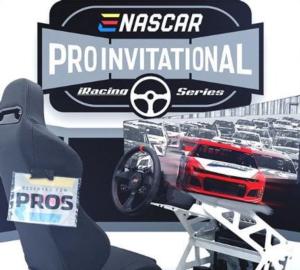 DAYTONA BEACH, Fla. - One thing's for sure, Sunday's eNASCAR iRacing Pro Invitational Series race (1:30 p.m. ET on FS1 and FOX Sports app) provides a unique way for NASCAR to remain connected with its fans and also allow some of the sport's top drivers to tap into their competitive nature during this unprecedented time.

FOX Sports broadcasters Jeff Gordon, Mike Joy and Larry McReynolds will call the race on iRacing's virtual Homestead-Miami Speedway - where the NASCAR Cup Series, NASCAR Xfinity Series and NASCAR Gander RV & Outdoors Truck Series would have been competing this weekend. NASCAR's overall race schedule has been postponed through the May 3rd race weekend to align with CDC guidance.

Thanks to eNASCAR and iRacing the competition has a conduit to stay fresh and driven, however.

"It's a cool way to keep things going on the racing side and have that kind of outlet," said Wood Brothers Racing driver Matt DiBenedetto, who will compete on Sunday. "It'll be a lot of fun especially because most of us have simulators in our homes that we use for fun all the time."

DiBenedetto conceded he's spending his time this week on the simulator turning laps and preparing for this event. He fully expects the competition to be potent.

Not only is the sport's longtime Most Popular Driver Dale Earnhardt Jr. going to compete, but so is NASCAR Hall of Famer Bobby Labonte.

The entry list for Sunday's race features active NASCAR Cup Series champions Kyle Busch, Joey Logano and Brad Keselowski along with some of the sport's perennially most popular, such as Chase Elliott, Kyle Larson, Clint Bowyer and DiBenedetto. In fact, 13 of the top 20 ranked drivers in the NASCAR Cup Series standings are entered Sunday, in addition to Sunoco Rookie of the Year contenders Christopher Bell and John Hunter Nemechek.

The race will be limited to 35 drivers. All entered NASCAR Cup Series regulars, plus Earnhardt, Parker Kligerman and Labonte have been allotted positions in the lineup.  On Sunday morning, a qualifying race across the group of Xfinity Series and Gander Trucks drivers will determine the remainder of the grid.

Both the iRacing and NASCAR executives who have put this race together said they have been moved by the effort everyone has made to bring it to fruition - especially in such a short time frame.

These racers are fierce competitors and pride is on the line so there are high expectations about the nature of Sunday's race and the series going forward.

"I think what's happening behind the scenes right now that people aren't talking about is, I believe the closer we get to this weekend, these guys are getting a little nervous," said Tim Clark, NASCAR's Senior Vice President & Chief Digital Officer.

"They're practicing a little more and I think they've been reaching out to one another. Because they know the ones that are really good on this platform. And they are looking for any tips, tricks, hints or advantages they can get.

"I think that's happening more than we think. These guys are the ultimate competitors, they're not going to go into this with any other mindset than wanting to win."

DiBenedetto confirmed as much. He said that he has actually been a part of the iRacing community from as far back as 2009 - racing on a wide variety of track surfaces and venues. And while he's certainly had his share of virtual success, the driver of the No. 21 Wood Brothers Ford was certain that his competition is raising their game in anticipation of this opportunity too.

"We're all super, super competitive as drivers so I'm going to be spending a lot of time practicing over the next few days to make sure," DiBenedetto said. "I'll probably recruit some friends to have some private sessions with me to get as good as we can.

"Although it's for fun, when you put a bunch of drivers in a competitive situation, we're all going to take it pretty serious."

"It's going to be cool because it's a pretty level playing field for everybody," DiBenedetto said. "We're all going to be running the same set-ups so nobody's car set-ups are going to give them an advantage.

"It's really just going to come down to the driver and how good they are at iRacing and how much they practice because it's different than driving a real car. We can't just hop on there and be good. It actually takes time to get acclimated to it. The more time you spend doing it, the more races you've won and done on there, the better you are regardless if you've raced in real life or not."

And, DiBenedetto conceded of the race, "The one on Sunday is going to be pretty tough. There's going to be a lot of people practicing and pretty dedicated to this one."