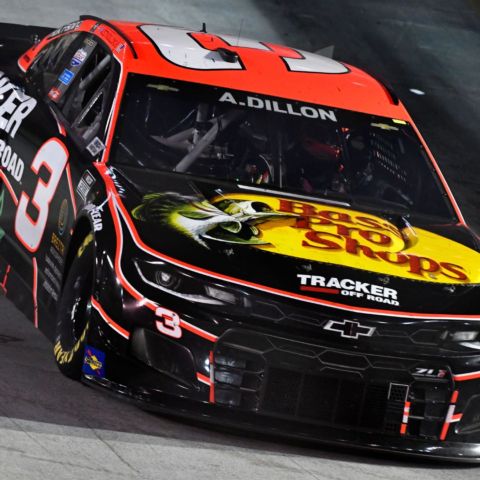 Austin Dillon, driver of the No. 3 Bass Pro Shops Chevy, qualified for the Round of 16 NASCAR Cup Series Playoffs, and will be among the favorites to win at Bristol Motor Speedway, host of the elimination race in the first round. 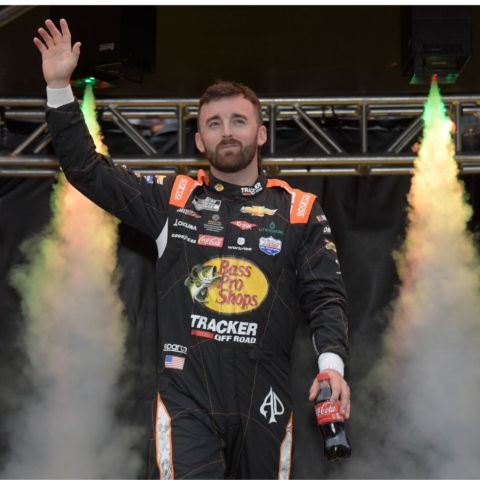 Austin Dillon enters The Last Great Colosseum during the track's famed driver intros. He is one of 16 Cup Series drivers who will be racing in the Playoffs at the Bass Pro Shops Night Race on Saturday, Sept. 17. 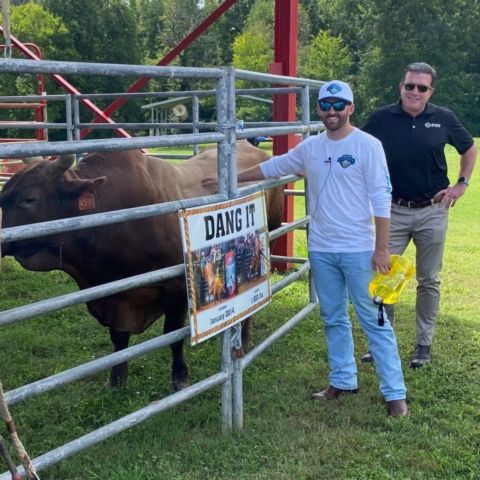 In a media event to preview the Bass Pro Shops Night Race last week, Austin Dillon gave the media a glimpse of his other life in pro sports, where he serves as GM for the Carolina Cowboys PBR team. Here he introduces one of the bulls, "Dang It," to BMS President Jerry Caldwell. 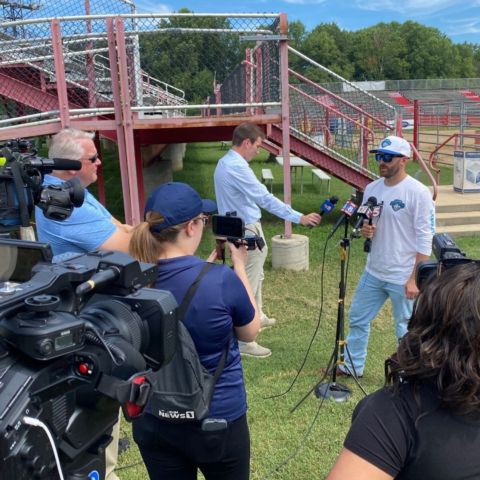 NASCAR Cup Series star Austin Dillon, who qualified for the NASCAR Playoffs Round of 16 with a victory last weekend at Daytona, held a news conference last week with regional media to talk about his role with the Carolina Cowboys and also to give a preview for the Bass Pro Shops Night Race, Sept. 17 at BMS.

In Austin Dillon’s other sports job, as GM for the new Carolina Cowboys Professional Bull Riders team, he pours over stats to put together the best team of bull riders on the circuit.

This past Sunday, the veteran NASCAR Cup Series driver saw lots of numbers, figures, scenarios and possible outcomes dancing in his head as he and his No. 3 Chevy team strategized as the laps counted down at Daytona International Speedway during the Cup Series’ regular season finale.

Knowing it was his last chance to qualify for the 16-driver Cup Series Playoff field, long-shot Dillon laid it all on the line over the final 21 laps and with a little help from teammate Tyler Reddick, he was able to grab the victory and a highly-sought-after post-season berth. Interestingly, he found out that his Cowboys also won their game on Sunday in Austin, Texas. The Cowboys posted a 3-0 score to defeat the Austin Gamblers, who posted a 2-1 total.

“Pretty sweet day,” Dillon said. “It's our first event win for the PBR team. They won and we did too. It's an amazing day. Thank you, Jesus.”

“Bristol is a blast, challenging and aggressive,” Dillon said. “If you could equate a race track to a bull ride, it’s Bristol. You’re really having to bear down because of how much load it takes on your body. The harder you drive it, sometimes it rewards you.”

When the checkered flag drops at America’s Night Race, four of the 16 drivers will be eliminated from Playoff contention. Dillon says Bristol’s elimination position in the Playoffs, along with the heightened atmosphere and all of the memorable finishes that have occurred there over the years on the high-banked half-mile oval gives that event an elevated status in the sport.

Dillion says to him, it’s definitely one of the sport’s majors.

Dillon, who has won the Food City 300 Xfinity Series race at Bristol, would love to add a Night Race trophy and BMS Gladiator Sword to his collection. He says he feels comfortable at all three of the Round of 16 stops.

"Actually, the first round for history looking back has been a good round for us in the 3 team,” Dillon said. “We've done a good job of upsetting some teams in that first round.

"It won't be from a lack of effort over the next three weeks to progress and try to get another win."

While Dillon will be working hard to advance in the Playoffs and chase a Cup Series championship, he will also be hard at work in his spare time, trying to give his Carolina Cowboys the best possible chance for success.

“If I do anything, I’m going all-in,” Dillon says. “I have a great team at RCR. My dad (Mike Dillon) has taken over some of the (Cowboys) contract stuff as I’ve had to get in the simulator and focus on the race car. I’ve got to do a lot of the fun parts like looking at the stats for the bull riding team and all that. You just have to balance it the best you can.”

The other Bass Pro Shops driver, Martin Truex Jr., saw his bid to make the Playoffs fall short when his No. 19 machine sustained damage and he couldn’t keep up with the draft in the final 21 laps. He finished eighth at Daytona and ultimately missed the Playoff berth by three points to rival Blaney.