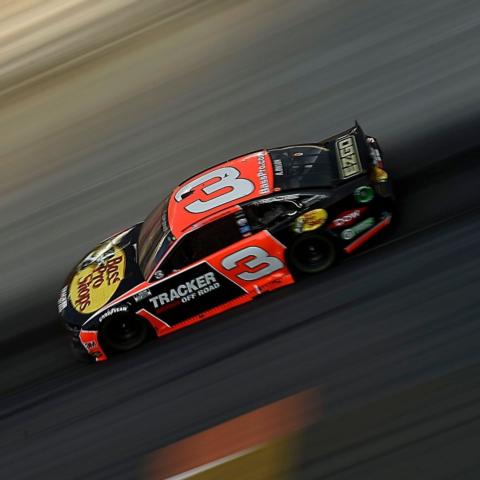 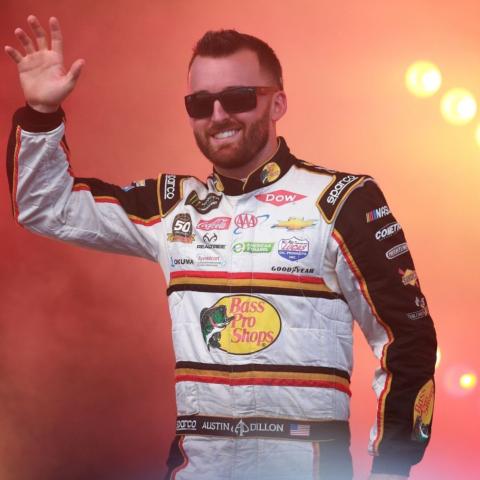 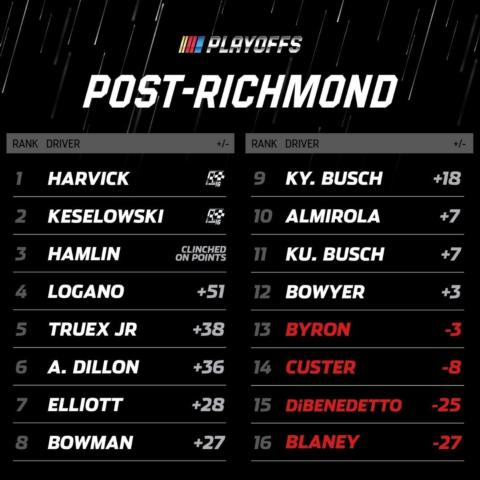 He hasn’t earned a victory yet after two races in the tough first round of the NASCAR Cup Series Playoffs, but Austin Dillon heads to Bristol Motor Speedway for Saturday’s Bass Pro Shops NRA Night Race feeling like he’s riding a huge wave of momentum.

Many stock car prognosticators had marked Dillon to be in the group of four drivers who wouldn’t advance to the Round of 12 as they logged their NASCAR Bracket Madness predictions at the close of the regular season. Dillon, who punched his Playoff ticket with a victory at Texas in July, has proved them all wrong so far by being impressive in the first two races in the demanding Round of 16, powering his No. 3 Richard Childress Racing Chevy Camaro to a pair of top-five finishes at Darlington and Richmond.

He sits in a great position as he heads to Bristol for Saturday night’s cut-off race for the Round of 16, which will be broadcast on NBCSN, PRN Radio and Sirius XM NASCAR Radio starting at 7:30 p.m. He is sixth overall and will run the Bass Pro Shops paint scheme on his red-hot Chevy as he will no doubt receive tremendous support from the Bristol crowd, who has a long term love affair going with the famed 3 car.

“It was a lot of fun (at Richmond) and I think we had the best car, so thanks to (crew chief) Justin Alexander and everyone at RCR and ECR for giving us a solid Chevy,” Dillon said. “We’re headed to Bristol Motor Speedway in a good spot and it’s exciting to know we still have eight more chances to try and get another win. Our confidence level for Bristol is pretty high.”

Dillon has claimed one top-five and three top-10s in his career at Bristol, including a sixth place finish at the Food City Supermarket Heroes 500 in May. Following the second place run at Darlington in the Playoff opener and the fourth place finish in Virginia where he led 55 laps, Dillon feels like a victory could be right around the corner.

“I feel like I gave one away (at Richmond),” Dillon said. “Our Dow Chevrolet was so fast. We had a massive day for stage points, which is going to help us out big picture-wise. We had a speeding penalty in Stage 1, and to come from the back to the front in that Stage just shows how fast our Chevy was. This No. 3 team is on fire right now and showing up when it matters.”

Three of the 16 drivers are already locked in for the next round of the Playoffs, including Kevin Harvick who won at Darlington and Richmond winner Brad Keselowski, who won at Bristol in May during the Food City Supermarket Heroes 500. Defending Night Race winner Denny Hamlin also is locked in to the next round based on points earned.

As for the rest of the competitors, it all depends on how they fare during 500 exciting laps of action at The World’s Fastest Half-Mile. The four drivers entering the race below the cut-line are William Byron, Cole Custer, Matt DiBenedetto and last place Ryan Blaney.

Byron is only three points below the line. Kyle Busch, who has eight BMS victories on his resume but no wins this season, is 18 points ahead of the cut-line. Three drivers are only single digits ahead of Bryon above the cut-line and include Aric Almirola, 2018 Night Race winner Kurt Busch and strong Bristol runner Clint Bowyer.

Yes, race fans, with that many drivers battling for what amounts to basically four transfer spots, this could get very interesting. Better grab two bags of popcorn.

Second-year Playoff contender Byron opened the post-season with a fifth place effort at Darlington, but finished 21st at Richmond. The young driver knows he needs to be at his best at BMS at the controls of his No. 24 Chevy for Hendrick Motorsports if he’s going to keep his championship dreams alive.

“It is what it is – we ran horrible (at Richmond) and there's no excuse for that,” Byron said. “It was really kind of a slow death the entire race... it's disappointing.

“We just have to put this one behind us and go to Bristol. I think we’ve ran OK at Bristol – top-10 in the spring and made the All-Star race. So, I think we just have to go there and hopefully have a good run.”

A good run at Bristol for Byron is a strong possibility. He won the Food City Showdown in iRacing back in April, finished eighth in the Food City race in May and posted a 12th place finish in the NASCAR All-Star Race at Bristol in July. He will need to rely on his all-concrete high-banked short track driving expertise in order to get the finish he needs at Bristol.

“This is definitely our toughest round,” Byron said. “I’d like to say if we can get through this round, the rest of the Playoffs will be great. But I think going to Bristol, it’s a track that we can have a good setup. We’ve ran decent there in the past, so we can hopefully look at that… We have to perform at Bristol.”

There’s a logjam of drivers who are more than 25 points above the cutline, including Joey Logano, Martin Truex Jr., Chase Elliott and Alex Bowman. Logano has two Night Race victories on his resume and was in contention late in the May race before getting collected in a racing incident with Chase Elliott. Elliott, meanwhile, won the All-Star Race in his No. 9 Hendrick Chevy and has posted three top-fives at BMS in the past. Bowman was eighth in the All-Star Race and registered 10th and 11th place finishes in his last two Bristol starts.

The one driver in this group who has had absolutely no luck at Bristol is Truex. At fifth in the Playoff standings he has a nice cushion going in to Bristol where he hopes to put his No. 19 Bass Pro Shops machine in Victory Lane for the first time. He will need all the moxie he can muster at Bristol, where he hasn’t posted a top-10 since 2017 and only has three top 10s in 29 career starts on the iconic short track.

Fortunately for Truex he is carrying some momentum to The Last Great Colosseum as he posted a solid second place finish at Richmond after being involved in a late race incident in the Playoff opener at Darlington with Elliott while battling for the lead with 13 laps to go. Despite his Bristol woes, Truex feels good about his Joe Gibbs Racing Team’s chances of advancing to the Round of 12.

“We’re strong,” said Truex, the 2017 Cup Series champ. “I feel like we’re executing well and we’re not making mistakes like we did early in the season, aside from (Darlington) obviously on the race track, but that was me, not the team. Just solid every week. Fast race cars and everybody is making good decisions. Hopefully, we can keep putting ourselves in the front and we’ll win some races eventually.”

Playoff cellar dwellars DiBenedetto and Blaney basically need to win the race in order to advance in the Playoffs. Those two will certainly receive a tremendous amount of support from the Bristol crowd as they are both beloved in Thunder Valley.

Bristol fans serenaded DiBenedetto after he led a ton of laps and posted a second place finish in last season’s Night Race. This year he drove his No. 21 Wood Brothers machine to a win in stage three of the NASCAR All-Star Open to advance to the All-Star Race, where he ultimately finished 13th.

“If there is one track to be in a must-win situation that I would choose it would definitely be Bristol,” DiBenedetto said. “I think we have a good shot at it. It is one that I am excited about and have circled off in this round... So, we will go to Bristol and do the best we can.”

Blaney continues to be one of the most-popular drivers in the sport and has posted four top 10s in his Bristol career and led 60 laps of the May race before getting caught up in a crash on lap 199. After logging finishes of 24th at Darlington and 19th at Richmond, Blaney says there’s only one path to keep his Playoff hopes alive.

“We have to win (at Bristol),” Blaney said. “It is pretty plain and simple. With the bad couple of races we have had here to start the playoffs off, we probably need to go out there and win Bristol. That is our mindset. That is our goal. It is our goal every week to win the race, but now it is our season on the line. We will see if we can get it done. We have been pretty close at Bristol before, it is just a matter of trying to put a whole race together there.”

The race weekend also will feature the regular season finale in the NASCAR Xfinity Series, more Playoff action in the NASCAR Gander RV & Outdoors Truck Series and what promises to be a thriller in the ARCA Menards Series.

The NASCAR Xfinity Series drivers, headed by Austin Cindric, Chase Briscoe, Justin Allgaier, Noah Gragson and Ross Chastain, will battle to improve their positions for the Playoffs in what is expected to be a dramatic and exciting regular season finale, Friday night, Sept. 18, during the Food City 300 at 7 p.m. (NBCSN, PRN Radio, Sirius XM Radio) When the checkered flag falls, the 12 Playoff drivers will be set in the Xfinity Series.

Many of short track racing’s rising stars, like Hailie Deegan, Ty Gibbs, Sam Mayer, Brett Holmes and Drew Dollar, will hit the track on Thursday night after the Truck Series race for the Bush’s Beans 200 in the ARCA Menards Series. Race officials announced recently that this race, which is scheduled as the 9:30 p.m. (FS1) nightcap on Thursday, will be increased by 50 laps to a 107-mile distance.