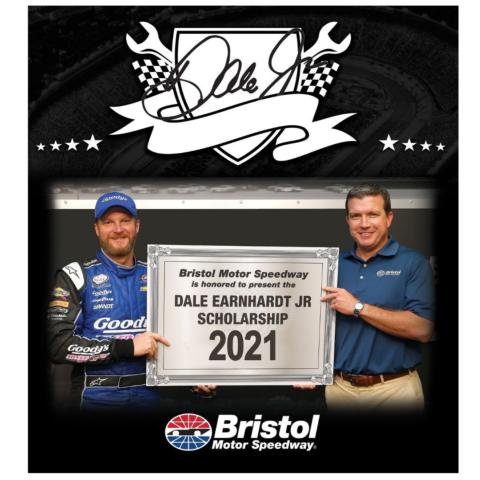 Bristol Motor Speedway officials announced today that the 2021 Dale Earnhardt Jr. Scholarship will be open to students at select colleges and universities who are pursuing higher education degrees in either automotive technology or hospitality and tourism.

In order to be eligible, students must be attending one of 10 designated colleges and universities within the Appalachian Highlands region surrounding Bristol Motor Speedway or the speedway’s official partnering institution, the University of Northwestern Ohio (UNOH) in Lima, Ohio, and be pursuing a higher education degree in either automotive technology or hospitality and tourism.

Created by Bristol Motor Speedway in 2017 as a retirement gift to Earnhardt Jr., the annual scholarship awards the winning student a one-time payment of $2,088 to assist with all college costs including tuition, housing, books and supplies. Past winners of the BMS Dale Earnhardt Jr. Scholarship are Jaicee Weaver and Jace Ketron, both of Bristol, Tenn.

Eligible students can download the criteria and application by visiting www.bristolmotorspeedway.com/scholarship. Once completed, all applications should be sent via email to [email protected].

Applications are due by 11:59 p.m. on Friday, Sept. 3, 2021. The winner will be announced during the upcoming Bass Pro Shops NRA Night Race weekend.

One of the most iconic racecar drivers of all time, Earnhardt Jr. serves as an analyst for NBC Sports’ NASCAR Cup and Xfinity Series race coverage and contributes to additional motorsports programming across NBC Sports. In addition to race coverage, Earnhardt hosts The Dale Jr. Download, a weekly interview program focused on motorsports on NBCSN, and Lost Speedways, a Peacock Original, that visits abandoned speedways. Voted by fans as NASCAR’s Most Popular Driver for an unprecedented 15 consecutive years (2003-17), Earnhardt, a 26-time winner in the NASCAR Cup Series including two Daytona 500s, is a third-generation driver who followed his legendary father Dale Earnhardt Sr., and his grandfather, Ralph Earnhardt, into the sport. As a team owner, Earnhardt founded and manages JR Motorsports, which fields four full-time entries in the NASCAR Xfinity Series. In the summer of 2020, Earnhardt was selected to the NASCAR Hall of Fame Class of 2021.

Earnhardt Jr.’s only Bristol victory in the Cup Series came in the 2004 Night Race in dramatic fashion where he famously said “It’s Bristol, Baby!” in Victory Lane following the win. Fans who attend this year’s Bass Pro Shops NRA Night Race can expect magical moments just like that one as NASCAR’s best drivers compete in close quarters in pursuit of a coveted victory at The Last Great Colosseum – NASCAR Playoff style – and only the strongest will survive 500 laps of mayhem on the storied short track.