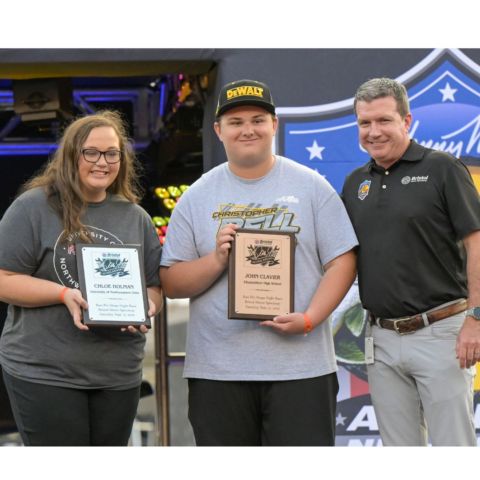 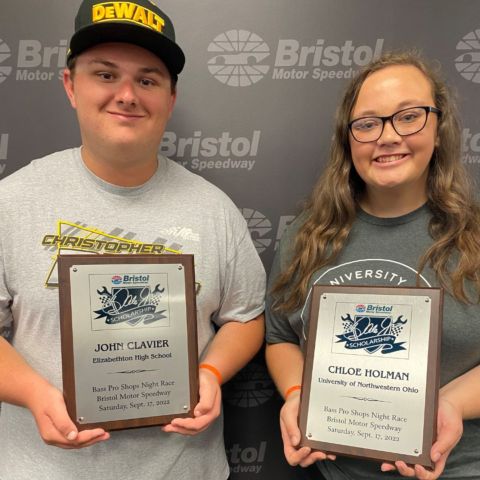 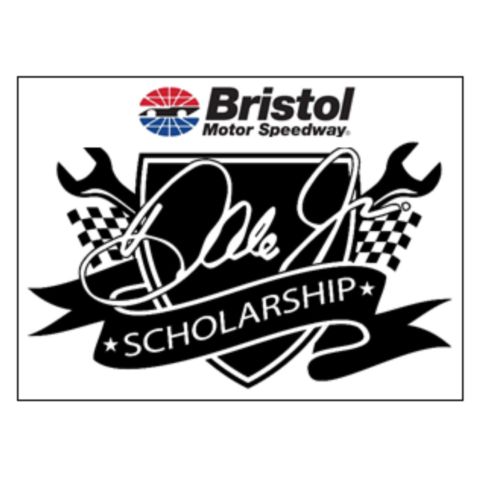 Bristol Motor Speedway officials announced today that John Clavier, Elizabethton, Tenn., and Chloe Holman, Essex, Mo., are joint winners of the Dale Earnhardt Jr. Scholarship for 2022. Both students will be honored during pre-race ceremonies prior to the green flag for Saturday’s Bass Pro Shops Night Race. They will walk across the pre-race stage, wave to the crowd, and each will receive a check for $2,088 and a commemorative plaque.

Clavier, a senior at Elizabethton High School, has been involved with volunteer projects over the past several years. He has also created content for his own YouTube channel and even won two awards at the inaugural 52 Film Fest in Johnson City, Tenn. earlier this year. His plan for the future is to attend East Tennessee State University and major in Media and Communications with a focus in Radio, TV and Film.

Holman attends the University of Northwestern Ohio (UNOH). As a kid she remembers always wanting to be a crew chief for her race car driving father and now helps him with social media and live timing. She also had the opportunity to work at Indianapolis Motor Speedway for the “Month of May,” a full month of events at the revered track leading up to the prestigious Indianapolis 500. Her plan for the future is to move over to the marketing and public relations side of motorsports and help drivers find sponsorship and money to continue their racing careers.

Created by Bristol Motor Speedway in 2017 as a retirement gift to Earnhardt Jr., the annual scholarship awards the winning student a one-time payment of $2,088 to assist with all college costs including tuition, housing, books and supplies. Past winners of the BMS Dale Earnhardt Jr. Scholarship are Jaicee Weaver (2018) and Jace Ketron (2019), both of Tennessee High School in Bristol, Tenn., and Knoxville, Tenn. student Caleb James Cate (2021), who attends UNOH.

In order to be eligible, students must be a senior at one of the 21 designated high schools or attending one of the eight designated colleges and universities in the Appalachian Highlands region surrounding Bristol Motor Speedway or a student at the speedway’s official partnering institution, UNOH in Lima, Ohio.

One of the most iconic race car drivers of all time, Earnhardt Jr. serves as an analyst for NBC Sports’ NASCAR Cup and Xfinity Series race coverage and contributes to additional motorsports programming across NBC Sports. In addition to race coverage, Earnhardt hosts The Dale Jr. Download, a weekly interview program focused on motorsports, and Lost Speedways, a Peacock Original, that visits abandoned speedways. Voted by fans as NASCAR’s Most Popular Driver for an unprecedented 15 consecutive years (2003-17), Earnhardt, a 26-time winner in the NASCAR Cup Series including two Daytona 500s, is a third-generation driver who followed his legendary father Dale Earnhardt Sr., and his grandfather, Ralph Earnhardt, into the sport. As a team owner, Earnhardt founded and manages JR Motorsports, which fields four full-time entries in the NASCAR Xfinity Series. In the summer of 2020, Earnhardt was selected to the NASCAR Hall of Fame Class of 2021.