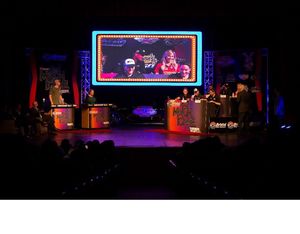 With the NASCAR and NHRA race weekends fast approaching, a few drivers from the respective auto racing sanctioning bodies visited Bristol's Paramount Center for the Arts on March 7 for the Speedway's 2017 Season Preview.

"This was an amusing way to showcase the unique and diverse personalities within the racing communities and set the stage for the exhilarating racing season we have ahead of us this year," said Jerry Caldwell, executive vice president and general manager of Bristol Motor Speedway. "We wanted to treat our loyal fans to a night of enjoyment where they could get up close with some of our drivers and learn more about what's headed this way in the coming months."

NOTE: Show starts at the 27: mark of the video below

In addition to the four NASCAR drivers, the Season Preview featured a special guest from the executive offices at NASCAR, vice and Bristol native, Mike Helton. Helton joined a panel to talk about NASCAR's new stage-based racing format and encouraged fans to get out to the track because they will like what they see when the circuit rolls into Bristol for the Food City 500 weekend, April 21-23.

The highlight of the evening was the BMS Match Game, which showcased four fans randomly selected from the crowd trying to match the panel of six drivers. Hilarity ensued as drivers and contestants revealed their answers in an attempt to make a match. In the end, everyone was a winner as the four contestants gained new memories and won race tickets.

Force drew laughs from the crowd with her unique answer to the question, "To create the ultimate Bristol tailgate, Big John and Ray ran out to Food City and bought 500 BLANKS." Following responses that included beer, cases of beer, aspirin and hot dogs, Force laughed at herself as she read off her answer of, "bottles of sunscreen." The moment provided a great start to the game show portion of the event.

Bowyer had the crowd in an uproar on multiple occasions, including his joke of a "hardened liver" in response to a racing fan question and a few fun quips about his new boss, Tony Stewart.

Perhaps the two best back-to-back answers were in response to the question, "Ron Capps and Christopher Bell were pulled over by Tennessee Highway Patrol on their way to the Season Preview. Instead of showing their licenses, they pulled out their BLANKS instead." Bowyer poked fun at the age difference, writing "Learners permit and AARP card," while Capps' answer pandered to the Tennessee audience by replying "a Peyton Manning cap," which earned the California native and 2016 NHRA Funny Car world champ a loud round of applause from the audience.