Thanks to NASCAR's innovative race-stage format, there will be more on the line for NASCAR's best drivers than ever before during the upcoming Food City 500 weekend (April 21-23), treating guests of Bristol Motor Speedway to a strategy-filled weekend of racing excitement.

"We're eager to see this new format play out at The Last Great Colosseum," said Jerry Caldwell, executive vice president and general manager at Bristol Motor Speedway. "The additional incentives will reward both drivers and fans alike throughout the race. That recipe will make for great side-by-side racing for the Food City 500 weekend." 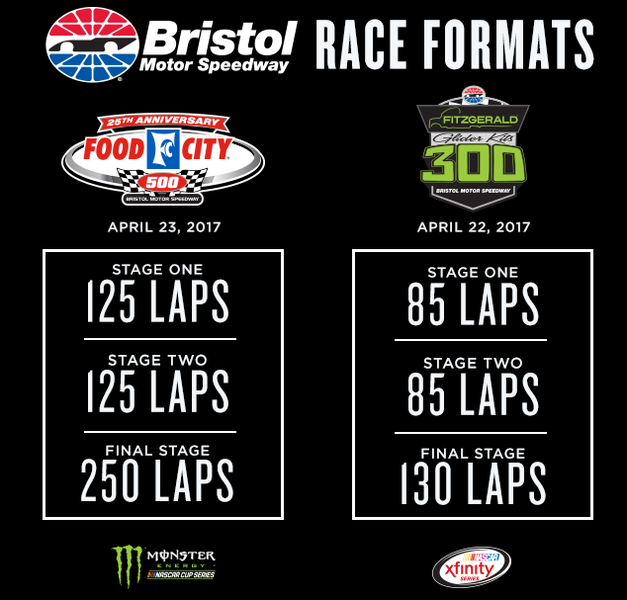 "Bristol is just so dynamic, from the bottom to the top and the middle of the race track," said two-time Bristol winner Brad Keselowski. "You can run every lane and you have to be adaptive as a driver, and that makes it a fun challenge."

With the new format, the top 10 finishers of the first two stages of each race will be awarded additional championship points with the stage winner earning one playoff point. The caution flag will wave to signal the end of a stage and teams will be permitted to access pit road during the scheduled break.

The final stage will feature the normal point system that NASCAR fans are used to with the addition of five playoff points for the winner.

As announced earlier this month, the Fitzgerald Glider Kits 300 also will be a NXS Dash 4 Cash event in 2017. The top two finishing XFINITY regulars from the first two stages will be eligible for the $100,000 Dash 4 Cash bonus. The top finishers of those four during the final 250-lap stage will earn the prize.