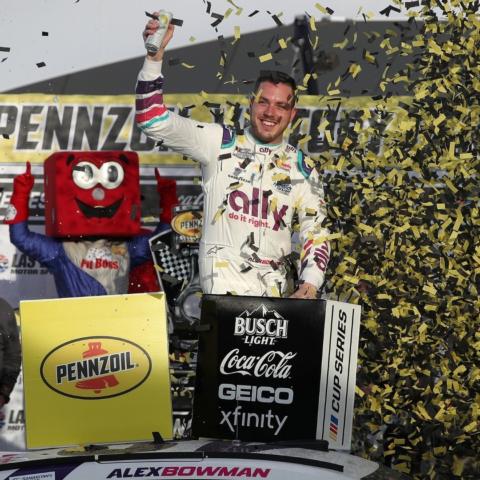 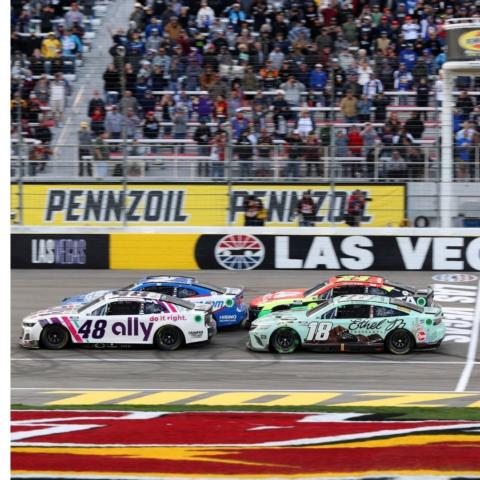 Alex Bowman won in a dramatic overtime ending in the Pennzoil 400 at Las Vegas Motor Speedway Sunday – gambling on a two-tire final pit stop for his No. 48 Hendrick Motorsports Chevrolet and holding off the field in a two-lap sprint to decide the NASCAR Cup Series race. The NASCAR Cup Series comes to Bristol Motor Speedway for the Food City Dirt Race weekend, April 15-17.

Bowman and Hendrick Motorsports teammate Kyle Larson made up the front row on the restart – the pair along with teammate William Byron took two tires on the final pit stop while Kyle Busch, who had led 40 of the previous 45 laps opted to get four tires and start just behind on the second row.

The two-tire stop, however, proved to be enough with Busch unable to even make a pass attempt as the Hendrick cars decided the trophy. The Tucson-native Bowman, 28, crossed the line .178-seconds ahead of the reigning NASCAR Cup Series champion Larson to earn his first trophy of 2022 and seventh of his career.  It was Bowman’s first Top-20 finish after a frustrating start to the three-race old season.

“This thing was so fast all day,’’ said Bowman, who led 16 of the 274 laps. “Just never really had the track position to show it. But man, what a call by [crew chief] Greg Ives and the guys to take two [tires] there and obviously it paid off.

“Racing Kyle [Larson] is always fun and I’ve got to race him for a couple wins and we always race each other super clean and super respectively. Just can’t say enough about these guys.

“It’s been a pretty awful start to the year so to come out here and get a win on a last re-start, I feel like that’s pretty special.’’

The runner-up finish for Larson, who led three times for 37 laps on the day, was good enough to propel him into the championship lead for the first time this season. He holds a six-point advantage over Joe Gibbs Racing’s Martin Truex Jr., who finished eighth on Sunday.

For most of the race’s final laps, it looked like Busch would claim his first NASCAR Cup Series trophy at his “home track” since 2009. It’s been 46 series wins since that triumph.

And Busch’s work in the No. 18 Joe Gibbs Racing machine on Sunday was especially impressive considering he crashed in opening practice on Saturday and was forced to use a back-up car originally sent to the track for spare parts. The car wasn’t prepared in time for qualifying so Busch started last in the race.

His rally for a near-win was enthusiastically appreciated by the home crowd even if the ultimate Top Five was still a bit disappointing for the former two-time series champion considering his time out front (49 laps) in the closing laps.

“Everybody really had a hand in making us go today, really appreciate that,’’ Busch said, acknowledging crew members from all four JGR cars frantically worked to get his car race ready.

“It was good, fast at the end and tried to do what I could there to hold the lead with Truex. Felt like I inched away finally and we were coming to the white [flag] but it wasn’t meant to be. Not our day. See you next week.’’

The race featuring the 1.5-mile debut of the NASCAR Cup Series Next Gen cars produced 23 lead changes among 15 different drivers with Bowman (Stage 1) and Chastain (Stage 2) winning the stages.

“We were like 30th in first practice, right off the truck and we slowly built up to it and if we can keep doing that and have cars like this, obviously we can compete,’’ Chastain said.

The NASCAR Cup Series next stop is Phoenix Raceway (3:30 p.m. ET, FOX, MRN, SiriusXM NASCAR Radio) next Sunday afternoon. The circuit will return to Bristol Motor Speedway April 15-17 for the Food City Dirt Race. It is the second time in the modern era that the Cup Series will compete on a dirt surface. Joey Logano won the Cup Series' historic return to dirt last year at BMS. To purchase tickets, please call (866) 415-4158 or click here.