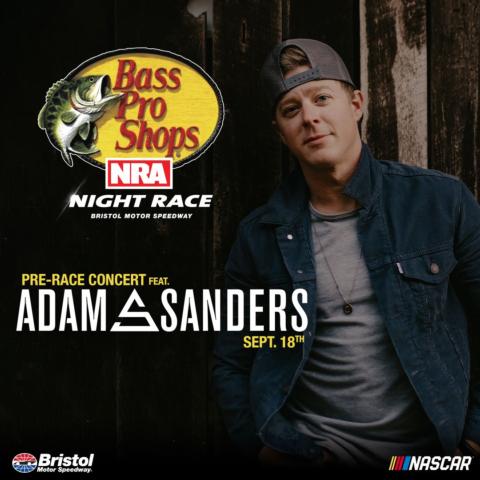 The pre-race concert will start at 5:45 p.m. and Sanders will perform in BMS Victory Lane, which is located on the roof of the infield care center near Turn 3.

Sanders, a Florida native who gained prominence in Nashville first as one of the hottest young song writers on Music Row, recently released his first full-length album titled What If I’m Right. The album features 13 songs including “All About That,” “Burn the Stars,” “Drink Drank Drunk,” and one that Bristol race fans will surely love titled, “Daddy, Jesus and Earnhardt.”

The song “Daddy, Jesus and Earnhardt,” came together late one night at a campsite in turn four outside of Atlanta Motor Speedway in 2019, co-written by Sanders along with Cole Swindell and Taylor Phillips. The trio were attending the race that weekend and the song is personal for Sanders, who says he was one of The Intimidator’s biggest fans growing up. These days, the 33-year-old Sanders says he pulls for Martin Truex, Jr.

Prior to starting his singing career, Sanders penned many classic hits for a variety of artists, including Swindell, Dustin Lynch, Luke Bryan and Dierks Bentley. Swindell’s “Ain’t Worth the Whiskey” and Lynch’s “Hell of a Night” are among his chart-topping tunes.

“It’s crazy to think my career is to a point where I’m able to play Bristol Motor Speedway, these are the things you dream of as a kid,” Sanders said. “I have been a NASCAR fan all of my life and growing up, my favorite driver was Dale Earnhardt, so having the opportunity to perform where he had so many unforgettable memories driving the No. 3, is truly special. It’s Bristol, baby!”

Sanders’ independent rise in the industry has netted him more than 125 million streams, 70,000 singles sold and landed him on Billboard’s Top 40 Country Albums chart. You can find out more about Adam Sanders by visiting his website, www.adamsandersmusic.com.

As the air fills with anticipation for the green flag to drop for the 2021 Bass Pro Shops NRA Night Race, Sept. 18 at 7:30 p.m. (NBCSN and PRN Radio), with so much at stake in the Cup Series Playoffs, fans will get to watch NASCAR’s best drivers compete in close quarters in pursuit of a coveted victory on the storied short track. You’ll get to see all of your favorite drivers racing hard to advance in the Playoffs, including Bristol dominator Kyle Busch, Food City Dirt Race winner Joey Logano, three-time Bristol winner Brad Keselowski, defending Night Race winner Kevin Harvick, Bristol All-Star Race winner and defending series champ Chase Elliott, and five-time season winner Kyle Larson, who is still looking for his first BMS Cup victory.