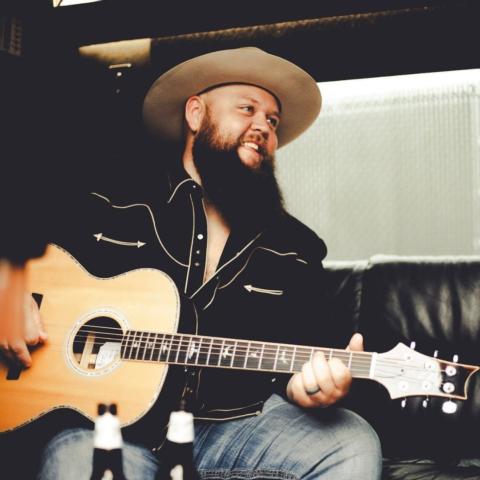 Praised by CMT as “a rising country artist with a rich, bluesy voice,” Larry Fleet has struck a major chord with fans as his powerhouse sound is taking Country music by storm.

That storm will thunder into iconic Bristol Motor Speedway on Sunday, March 28, as the rising star will perform the pre-race concert prior to the start of the historic Food City Dirt Race NASCAR Cup Series race, track officials announced today.

The one time construction worker who was discovered by fellow Country artist Jake Owen in 2017 while playing a friend’s backyard party, Fleet will take the stage at the Sugarlands Roof at Turn 4 in the track’s infield at approximately 2:30 p.m., safely distanced away from fans and participants.

Fleet joins a long list of Country artists who have sang inside The Last Great Colosseum, including most recently Pryor & Lee, Kenny Chesney, Joe Nichols, Randy Houser, Old Dominion, The Band Perry, A Thousand Horses and Travis Denning, among others.

“Bristol is the birthplace of Country Music and we are thrilled to bring in another powerful voice to get things started the right way at the historic Food City Dirt Race,” said Jerry Caldwell, executive vice president and general manager, Bristol Motor Speedway. “Music here at Bristol Motor Speedway is such a major tradition and Larry Fleet is a perfect choice to entertain the fans before we buckle in for some thrilling racing action on the dirt.”

Fleet’s first single, “Where I Find God” recently hit the airwaves to critical acclaim and follows the success of his first album, “Workin’ Hard,” which was released in November 2019 on Big Loud Records.  His performance at BMS will be his first ever at a NASCAR event.

“I’ve always been a massive fan of Bristol and it’s been on my bucket list to go,” Fleet says. “Playing the pre-race show my first time being at the track makes it that much sweeter and it’s something I’ll always remember. The Food City Dirt Race can’t get here quick enough!”

The Food City Dirt Race at the dirt-transformed Bristol Motor Speedway is the first race on a dirt surface for the NASCAR Cup Series in more than 50 years. Richard Petty won the last Cup race on dirt in 1970 at the North Carolina State Fairgrounds in Raleigh.

The Food City Dirt Race will air on FOX and PRN Radio at 3:30 p.m. on Sunday, March 28. The weekend also will feature Bush’s Beans Practice Day on Friday, March 26 and the Pinty’s Truck Race on Dirt for the Camping World Truck Series on Saturday, March 27, with the green flag dropping under the lights at 8 p.m. and race coverage by FS1 and MRN Radio.

About Larry Fleet
Blue-collar, Tennessee-native Larry Fleet grew up with a love of music sparked by an eclectic mix of influences spanning from Merle Haggard to Marvin Gaye. To make ends meet, Fleet spent tireless hours working construction jobs – never losing his dream of making music. A chance encounter with Jake Owen in 2017 led to a collaborative friendship and an opening slot on the road with Owen. Not long after, Fleet was sharing the stage with a living legend and one of his heroes – Willie Nelson – and etching his mark in the Nashville songwriting community co-writing with esteemed tunesmiths including Rhett Akins, Brett James and Kendell Marvel. The hard-working family man (and father of 1-year-old son, Waylon) is now turning heads with his debut single “Where I Find God” – a powerful ode to finding peace in the higher power’s presence. Garnering Fleet praise for his “emotive vocals” (Billboard), the song’s official music video continues to resonate with fans, amassing 13 MILLION YouTube views. “Where I Find God” follows the release of Fleet’s aptly-titled debut album on Big Loud Records, WORKIN’ HARD, produced by studio ace Joey Moi.