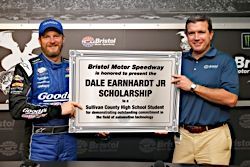 On Twitter, Dale Earnhardt Jr. is not a two-time Daytona 500 winner or 14-time winner of NASCAR's Most Popular Driver award. He is a retired automotive service mechanic, former backup soccer player for his high school and an aspiring barbecue pitmaster who likes friends, music and beer.

Drawing inspiration from his social media profile, Bristol Motor Speedway on Thursday honored Earnhardt by announcing it was starting a scholarship in his name. The Dale Earnhardt Jr. Scholarship will be a $2,088 annual award that goes to a high school student from Sullivan County, Tennessee who wants to pursue a career in the automotive industry.

Earnhardt is retiring from full-time competition after this season, so the track is taking his visit this week as an opportunity to honor the 42-year-old. Bristol Motor Speedway executive vice president and general manager Jerry Caldwell made the scholarship presentation in the infield media center.

"We felt like it was appropriate for us to honor him but also help out a bright, young student who has an interest in the automotive industry," Caldwell said. "We'll be awarding that annually as a way to honor you and help a student get a leg up."

Moments after the scholarship announcement, artist Sam Bass presented Earnhardt with the original painting that graces the program cover for Saturday's Bass Pro Shops NRA Night Race for the Monster Energy NASCAR Cup Series. The scene, titled "Leave a Mark," depicts Earnhardt's car on the track next to his portrait with the No. 3 car that his father made famous in the night sky.

"Sam's been great for the sport, a great friend to myself and my father and our whole family," Earnhardt said. "I don't know that I've got an original painting, so this is very special."

Later in the day, the track also dedicated an interactive monument paying homage to the, "It's Bristol, baby!" slogan that Earnhardt first uttered after his victory on Aug. 28, 2004.

Earnhardt isn't kidding when he says Bristol Motor Speedway is his favorite track. The trophy from his victory in that race - his only Cup Series victory at Bristol - is displayed in his living room.

"Honestly, when I was a little kid, the night race was my favorite race in the season," he said. "Bristol was my favorite for a lot of different reasons. But as a 12 to 15-year-old kid this place was just the ultimate playground. We enjoyed coming here. The racing's always been incredible. It is so special and unique, different than anything else we do. Just something I'm super proud of for the sport.

"It's been an incredible racetrack and has done so much for NASCAR over the years to promote the sport and give folks a great place to come enjoy a race. Everything that happens around the racetrack, outside the racetrack, the atmosphere during race weekends is really great. You guys do an awesome job. I hope to keep coming back. It's definitely still my favorite stop. I'll be lucky, I guess, is a way to put it, to be able to call this race next year and be a part of the broadcast team."

Earnhardt will assume a new role for NBC Sports Group and its NASCAR coverage next year. Fans will still be able to see him race. His plans for 2018 call for at least one XFINITY Series race.

Earnhardt sat out the final 18 Cup Series races last season due to concussion-like symptoms and announced in April that he would be retiring as a full-time driver at the end of this season.

He hoped to make a run at the Cup Series championship. Entering the Bass Pro Shops NRA Night Race, the driver of the No. 88 Hendrick Motorsports Chevrolet is 22nd in points with out a win and just one top-five finish.

"There's really no excuse for us not performing well or meeting expectations," Earnhardt said. "There's no excuse for missing a lot of races. Kyle (Busch) missed a lot of races with his injuries and came back and was successful right out of the gate. I felt like I was ready. I felt like I could come in and compete. I still feel that way. We've just got to get our stuff together as a team."

Earnhardt has made it clear that he doesn't need to be showered with expensive gifts in his final season and would prefer resources be used to help others.

"I just like helping people," Earnhardt said. "I've been blessed with a lot of things and I don't need anything else. If the track's going to make an effort, maybe even put some money into something, I'd rather them do something that's going to make an impact in somebody's life. That's an awesome reward for me, to see somebody deserving benefit. I enjoy that.

"It's fun to see how the tracks get creative to make an impact in their own communities. I thought it would be a one-time deal so it surprises me that it's going to be annual. I think tracks should be commended on an effort to do something that's going to be long lasting and impact someone else's life."

Created by Bristol Motor Speedway, the Dale Earnhardt Jr. Scholarship is designed to provide recognition and support to one graduating high school senior each year who has demonstrated interest and ability in the field of automotive technology and has expressed an interest in pursuing an education in automotive technology.

Nominations should be sent by the schools before April 1 to: