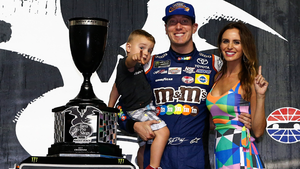 As he climbed out of his car after winning the Bass Pro Shops NRA Night Race on Saturday at Bristol Motor Speedway, many fans greeted Kyle Busch with loud boos.

He responded as any good heel would by holding up three fingers then cupping his hands to his ears as if to encourage more robust boos. But no amount of noise was going to distract the 32-year-old from enjoying a significant and satisfying personal achievement.

Seven years earlier at the same track, Busch became the first driver to sweep three NASCAR national series races in the same weekend. On Saturday, he duplicated the feat.

Busch passed rookie Erik Jones for the lead with 56 laps remaining and drove away with his sixth career NASCAR Cup Series victory at the high-banked, half-mile track that has been among his best through the years.

"This is fun. This is cool," he said. "It's neat to accomplish this once again. It's crazy to do it at the same track over again for as many times as maybe I had the opportunity to do a sweep all over again. Nonetheless, this is Bristol sweep 2.0 and this time around (son) Brexton is here, so that's pretty cool, too."

Jones started from the pole and led 260 of the 500 laps. After finishing second, he was reminded of the old racing saying that sometimes you have to lose one to win one.

"You don't want to sound like you're whining or being a sore loser by saying it sucks to run second, but it's a bummer. It hurts," the 21-year-old driver of the Furniture Row Racing No. 77 said. "You want to win every race you're in and this was the first shot that I really had to come really close to it in the Cup Series.

"Bristol is a really good racetrack for myself and I thought we had a shot at it all night, led a ton of laps. Yeah, it hurts when you're that close and feel like you have that good a car. It's Kyle Busch. He won all three races here this weekend."

Busch and his No. 18 crossed the finish line 1.422 seconds ahead of Jones, who will become his teammate at Joe Gibbs Racing next season. Fellow JGR driver Denny Hamlin finished third followed by four-time Bristol winner Matt Kenseth, who rallied back from a pit road speeding penalty earlier in the race to finish fourth. Jones will replace Kenseth in the No. 20 Toyota next year. Five-time Bristol winner Kurt Busch finished fifth.

Busch had to overcome pit road penalties in his Truck and XFINITY series victories earlier in the week but avoided any such miscues Saturday.

"As the races go on and we get closer and closer to the Chase, he seems to find another level of focus," Busch's crew chief Adam Stevens said. "I think we saw a little bit of that tonight. This is a big deal to him. Winning a race is a big deal. He was definitely focused and had his eyes on the prize."

Jones started from the pole and led more laps than he had in the first 23 races of his rookie season combined. Busch led seven times for 156 laps and kept his emotions under control when he lost the lead on pit road earlier in the race.

"Sometimes you come down pit road and you have a really good stop and you maintain or even gain spots. Other other times you come down pit road and may have an issue and you lose spots," Busch said. "You expect to lose a spot or two especially when you're having your rear guy do spring rubbers or something like that. When it's just an air pressure adjustment stop or whatever it might be and you lose spots on that because somebody stumbles, it's a little frustrating. But I have my mistakes out on the racetrack as well, too. There was a couple times when I chattered the rear tires or got loose and lost a spot here or there. We all have those mistakes."

Saturday's race saw drivers utilize both the upper and lower grooves in the turns. Track operations personnel applied another round of resin to bottom lane in the corners before the race. Drivers hugged the bottom at the start of runs but migrated up the track as runs progressed.

Busch said he's never driven as hard as he did over the final 60 laps. While he was best around the top, Jones was better on the bottom.

"When I moved up to the top, I was a little worried knowing we were tight on the bottom as it was," Jones said. "But we found good speed. We eventually burned the top in enough and got it high enough to where I felt like we had decent speed. It just seemed like Kyle and I were trading lap times. He would catch a little traffic, we'd run him down. I'd catch some traffic, lose him a little bit."

After Saturday, there are now two races remaining in the Cup Series regular season. Series points leader Martin Truex Jr. entered the night race with an opportunity to clinch the regular season championship.

He finished one lap down in 21st place and saw his lead tighten. He needed to leave Bristol with a 121-point advantage to clinch but instead left with a 101 lead over Busch.

The second segment derailed Truex's night. A loose wheel after a pit stop forced him back to pit road. He was set to line up fifth on a restart but returned to pit road to fix the loose wheel as the race restarted. NASCAR then penalized him for an outside tire violation. After serving the pass-through penalty, he found himself two laps down in 29th.

A victory by Jones or Kenseth would have dramatically altered the playoff outlook. Thirteen drivers have locked up spots in the 16-driver field by virtue of victories earlier this season. Saturday's victory was Busch's second win this season.

In his final night race as a full-time driver, Dale Earnhardt Jr. was the focus of much adulation before the race. It spilled into the first segment. On Lap 88, fans saluted the driver of the No. 88 Chevrolet. He was in 17th place at the time and dropped two spots by the end of the segment. Earnhardt finished 23rd.

"We struggled," he said. "We had a real fast car for like 10-15 laps and then we would just real, real tight, so we struggled all day trying to figure it out. We weren't good and we weren't going to fix it on pit road either. We've got a lot of tools on pit road to really get after it, but the problems we had we couldn't fix with wedge or trackbar."

Brad Keselowski also endured a rough night. The driver of the No. 2 Team Penske Ford finished the segment four laps down in 27th place after being forced to pit for a flat tire five laps into the race. He finished 29th. Teammate Joey Logano finished 13th.

As he celebrated on the frontstretch, and replays of his victories played on Colossus, a bystander handed Busch a broom. He took it and climbed onto the roof of his No. 18 Toyota and swept it off. Saturday's victory was his 20th across all series at Bristol.

Kyle Larson praised Busch's talent on Twitter after the race.

"Love him or hate him I feel he is the most all-around talented driver I will ever witness in my lifetime. Congratulations @KyleBusch."

Larson, who led 70 laps and finished ninth in the No. 42 Chip Ganassi Racing Chevrolet, concluded the tweet with a goat icon, as in greatest of all time.

Busch said this tripleheader sweep was more difficult than the one in 2010.

"Erik Jones put up a whale of a fight," he said. "That's all I had. I was running with my tongue hanging. My arms were Jell-O and my throat hurts. But, man, that's awesome."